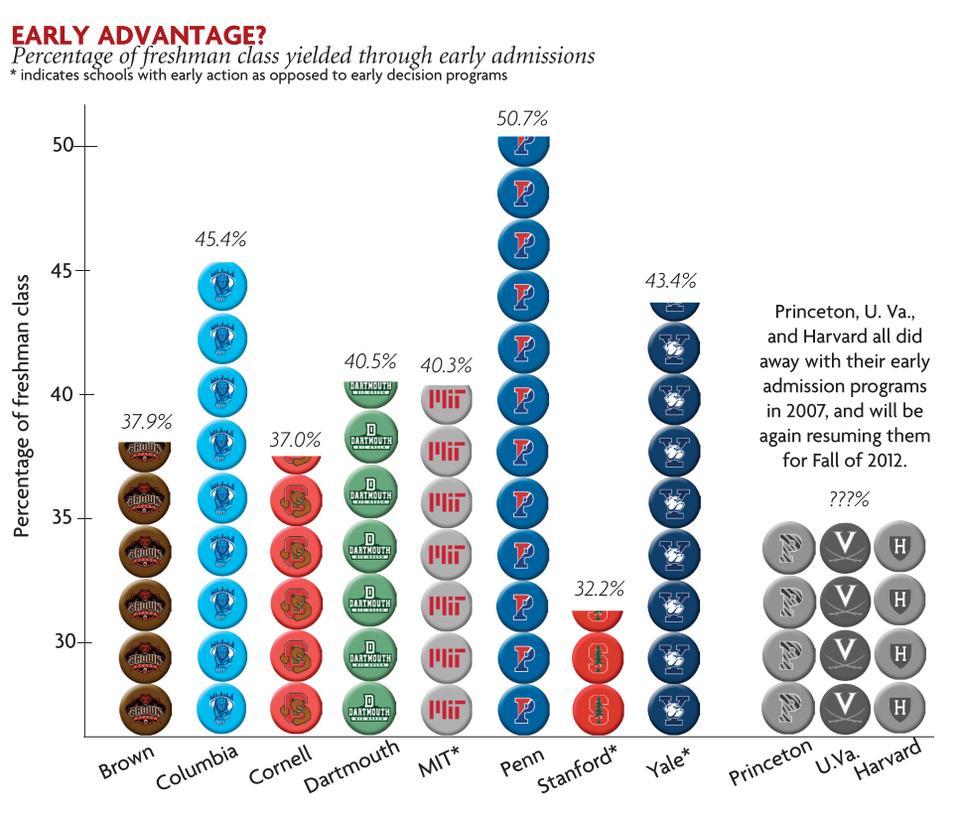 The percentage of the freshman class that is yielded through early admissions differs across colleges. Princeton, U. Va., and Harvard all did away with their early admission programs in 2007 and will be resuming them for Fall of 2012.
By Justin C. Worland and Julie M. Zauzmer, Crimson Staff Writers

In a reversal of a bold policy that College administrators once touted as a boon for lower-income students, Harvard and Princeton University both announced yesterday that they will resume the early admissions program for students applying this fall.

Concerned that such programs disadvantaged applicants from underprivileged backgrounds, Harvard—followed by the University of Virginia and Princeton—eliminated early admissions starting for the Class of 2012.

When Harvard announced in 2006 that it would suspend its early admissions program, the University sent shock waves through higher education, and the move was seen as a step forward for increasing access to education.

But in recent months, Harvard administrators have come to reconsider the policy amid concerns that the College may be missing some of the country’s most talented applicants.

“We looked carefully at trends in Harvard admissions these past years and saw that many highly talented students, including some of the best-prepared low-income and underrepresented minority students, were choosing programs with an early-action option, and therefore were missing out on the opportunity to consider Harvard,” Dean of the Faculty of Arts and Sciences Michael D. Smith said in a statement.

Beginning with students applying for the classes of 2016, Harvard and Princeton will both offer a single-choice early action application option. While this practice does not require admitted students to attend, it does prohibit students from applying to other schools’ early action or early decision programs.

But experts said that yesterday’s decision—an abrupt departure from the policy of the past four years—will dramatically alter the college admissions landscape for students seeking spots at highly selective universities.

Experts also question what has changed over the past four years to justify the policy’s return. Early admissions programs have in the past been considered beneficial for traditionally advantaged groups in the college admissions process—such as athletes, legacies, and the children of donors—but it remains unclear whether the return of early admissions will have negative repercussions for lower-income students.

Even as he was singing the praises of a single admissions cycle five years ago, Dean of Admissions and Financial Aid William R. Fitzsimmons ’67 said that the College might reevaluate its decision within a few years.

“If after several years with a single admissions deadline, we find ourselves needing to reinstate early admission to preserve the quality of our student body, we will return to early action,” he said in the 2006 statement which initially heralded the end of early action.

Describing the elimination as “an experiment” earlier this month, Fitzsimmons reiterated the fact that the decision was always open to review.

Fitzsimmons said that Harvard began seriously considering reinstating early action this past summer. After months of review, the Office of Admissions decided that the upswing in students applying to early programs across the country, as well as students’ desire to gain entry to Harvard earlier in the year, showed a need to resume early admissions at the College.

“We started to hear that more and more people were applying early across the country,” Fitzsimmons said. “Given the uncertainty that an economic downturn entails—people look for the certainty that early admission would provide.” He added that students are especially keen to secure speedy admission to a school with generous financial aid like Harvard.

Fitzsimmons pointed to rising numbers of early applications nationwide as evidence that early action programs have now become available to a larger pool of students than in 2006, when the College did away with the program.

University President Drew G. Faust said in a statement yesterday that the return of early action is now “consistent with our bedrock commitment to access, affordability, and excellence.”

Princeton President Shirley M. Tilghman also said in a statement that she believes that renewing early admissions will allow her school to better recruit students from underrepresented groups.

“By reinstating an early program, we hope we can achieve two goals: provide opportunities for early application for students who know that Princeton is their first choice, while at the same time sustaining and even enhancing the progress we have made in recent years in diversifying our applicant pool,” she said.

Fitzsimmons noted that applicants will gain no additional favor for choosing to apply in the early round rather than the regular cycle.

NO WORM FOR THE EARLY BIRD

When Harvard announced the elimination of early action in 2006, University officials hailed the move as a progressive step that would both help Harvard recruit students from underrepresented groups and ease the stress of the admissions process for students of all backgrounds.

Fitzsimmons told The Crimson in 2006 that the removal of early admission was “certainly a win for students in the bottom quarter and bottom half of the income distribution.”

At the time, the University argued that low-income students were hindered from participating in early admissions programs since they needed to apply to many schools in order to compare financial aid offers from multiple institutions.

In addition, Harvard administrators said that wealthier students had greater access to the resources needed to put together a successful college application by the Nov. 1 early action deadline.

At the time of the announcement, Harvard administrators said that they hoped that many top universities would follow in Harvard’s footsteps, but only Virginia and Princeton did away with their early decision programs.

Some experts said that while the prestige of schools like Harvard and Princeton allowed them to eliminate early admission, other schools could not do so without significantly damaging the quality of their applicant pools.

“Other schools can’t afford to do away with early,” Amy Sack, president of admissions consulting company Admissions: Accomplished, said in an interview with The Crimson yesterday. “An early plan is very important to some schools, though it’s not maybe to schools like Harvard, Yale, Princeton, or Stanford,” which high-caliber high school seniors will apply to regardless of their application deadlines.

Despite the fact that only two schools mimicked Harvard’s policy during the past five years, independent Conn. college counselor Gay S. Pepper said she believes that Harvard changed the admissions climate for the better by temporarily eschewing early admissions.

“It sent a real shock wave. A lot of colleges realized that early decision wasn’t benefiting the students. Many colleges started [non-binding] early action programs instead,” Pepper said. “It was a very daring move.”

According to admissions experts, the reinstatement of early admissions programs at both Harvard and Princeton will fundamentally alter the dynamics of college admissions.

“This is a seismic shift,” said Michael Goran, director and educational consultant at IvySelect, a college counseling firm in California. “I really do believe that it creates a new dynamic.”

The four institutions that many consider the nation’s preeminent universities—Harvard, Yale, Princeton, and Stanford—now all offer non-binding single-choice early action programs. According to college counselors, students hoping to attend one of these schools are now likely to apply early to their first choice and attend if admitted, rather than apply to more schools and make up their minds in May.

“I think it will be the most earth-shattering for Yale,” said Sack, saying that in the past five years, students often applied early to Yale even if Harvard or Princeton was their first choice. Next year, Sack hypothesized, Yale’s early applications will decrease as those students migrate to Harvard and Princeton.

Experts said that Harvard stands to directly benefit from the new policy and will likely see a higher yield in the future.

“You’re not committed to the school, but at the end of the day, chances are you have already psychologically committed by applying early action in the first place,” Goran said, arguing that Harvard can now draw top students through its early action program.

Others were skeptical of the College’s claim that the reinstated early program will be equally accessible to students from diverse backgrounds. Cigus Vanni, a guidance counselor at Cherry Hill High School in New Jersey, said that early admission has traditionally been used to guarantee admission to athletes, legacies, and the children of donors as quickly as possible. Predicting that this trend will start again with the rebirth of Harvard’s early action program, Vanni said that having these candidates in the pool may boost the early admission rate, causing acceptance during the early cycle to appear deceptively easy.

Current applicants to the College interviewed by The Crimson yesterday reported that they would have applied early to Harvard had the option been available.