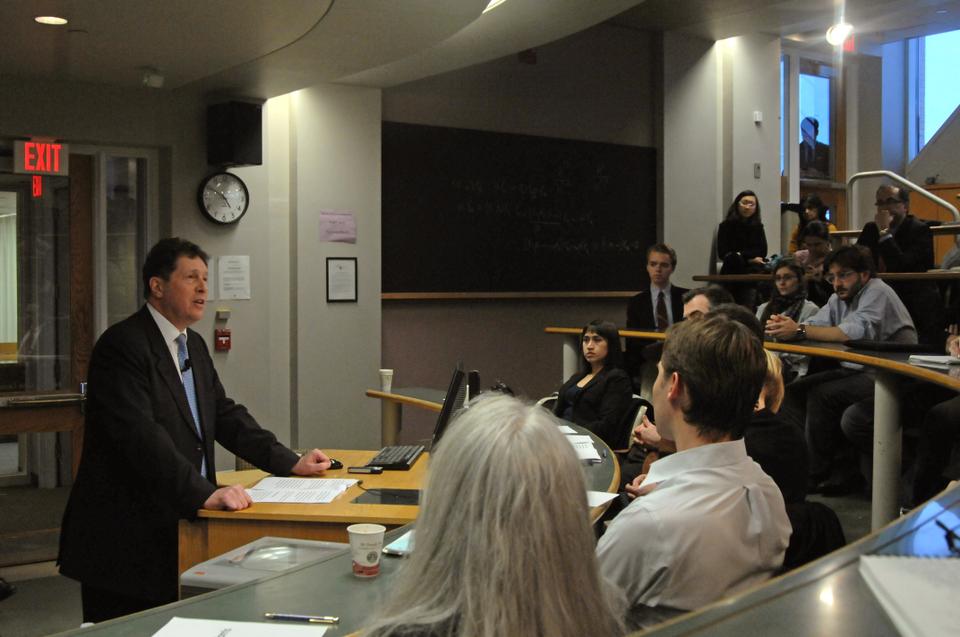 Sir Nigel Sheinwald, British Ambassador to the US, speaks at the Kennedy School about Britain's plans to manage budget cuts while maintaining defense, security and relations with the EU, the United States and the world.
By Melanie A. Guzman, Crimson Staff Writer

Despite a faltering economy, the United Kingdom will not turn its back on the United States and other allies as it seeks to continue to serve as a major global power, said British Ambassador to the U.S. Nigel E. Sheinwald during his speech at the Harvard Kennedy School’s Belfer Center for Science and International Affairs yesterday.

After speaking about the current fragility of the European economy, Sheinwald turned to Britain’s plan of action for coping with the “difficult economic backdrop” in Europe. He focused on investment in key infrastructure projects, refocusing the government on vital areas and forging a new model of sustainable growth.

While the U.K. intends to contribute to and participate in globalization, Sheinwald said that the country will have to align itself with the 21st century world by modernizing defense and cyber capabilities, building up Special Forces and intelligence operations, and cooperating more closely with allies, including the U.S.

“The global landscape has changed dramatically,” Sheinwald said. “The international environment and the set of challenges that face us are more complex.”

The event, entitled “UK Foreign and Security Policy in an Age of Austerity,” was part of the ongoing Future of Diplomacy Project at the Institute of Politics. Kennedy School Professor R. Nicholas Burns moderated the discussion.

The Future of Diplomacy Project officially launched last November as a way to introduce speakers and discussions related to the role of diplomacy in a rapidly changing world, said Cathryn A. Clüver, the executive director of the project.

“For us, we wanted to look at the major shifts European economies are facing, because they no longer can borrow as much as they used to, and what that means for general global commitments,” Clüver said of the decision to have Sheinwald speak.

After living in England for 10 years, Anthony P. Morris, a member of the Kennedy School Dean’s Council, said he was very curious to hear Sheinwald’s perspective. Although Morris said that Sheinwald shed a positive light on a difficult set of circumstances, Morris added that he doesn’t think the U.K. initiatives will work quite as well as Sheinwald optimistically expressed.

Jonathan J. N. Edwards, a first-year graduate student, said the speech made him feel proud to not only be British, but also to study at an American university.

“What I primarily took away was the strength of the UK and U.S. relationship and the role the plays today,” Edwards said.

Sheinwald concluded the speech by reiterating that “austerity is a phase, not a current condition” and that the U.K. plans to maintain its global role.

“Britain will remain America’s most capable ally, rather leaner and tauter and conscious of the need to put our economy first,” Sheinwald said, “but still with the impressive global network and a will to act to advance our shared goals.”

The Feb. 9 article "Diplomat Asserts Britain's Global Role" misstated the Future of Diplomacy Project's institutional affiliation. The project is part of the Belfer Center for Science and International Affairs, not the Institute of Politics.