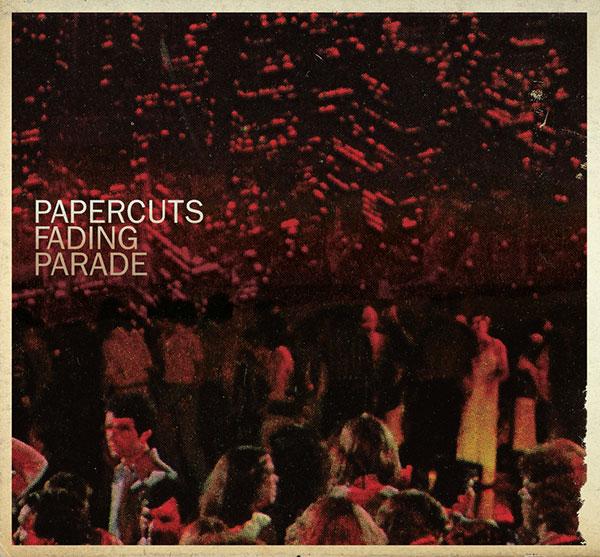 By Aisha K. Down, Contributing Writer

There’s a kind of adolescent ennui in some of Papercuts’ song titles—titles like “Chills” and “I’ll See You Later I Guess”—that’s unfortunately indicative of the mood of the entire album. “Fading Parade” is a release that seems designed to encourage listeners to project their own experiences onto its generic, somnambulant lyrics and bleached-out musical backdrops. However, there’s not enough energy or emotion in most of the songs to engage listeners to this degree, and the result is more exhaustion than the catharsis that the album seems desperate to produce.

The ambiguous and almost juvenile language captures the noncommittal sense of many of the songs—“Your things are on the floor / I’ll see you later, I guess.” The artist comes across as more of a washed-out relic of the psychedelics than an emotionally drained youth. The vocals are indistinct and sound more fatigued and apathetic than engagingly distant. They slip easily in and out of focus, and form more of a background for other meditations than a complete sensation.

The music itself is characterized by a silvery, synthesized sound with loud percussive elements like cymbals that add depth. Some of the sound recalls the sense of rainy-day desperation of the Smashing Pumpkins, but it lacks a certain edge of ferocity as well as a nuance in its emotional expression. The vocals in “Fading Parade” sound removed, and are frequently obscured by the percussive elements. The singer sounds paralyzed, often fading in articulation as if exhausted to the point of incomprehensibility. It’s the kind of music that makes your heartbeat slow and the light seem grayer, but it doesn’t demand enough attention to fulfill its promise of catharsis.

Occasionally, “Fading Parade” puts out a song that evolves into a sound a bit more memorable than psychedelic exhaustion. “Chills” hits hard in the opening with a rare urgency in the vocals, “She took me down / Till we were lost / Under the wide stairway.” Unlike in many of the songs, the vocals in “Chills” remain distinguishable above the electronic soundscape for almost the entire track. Eventually, the numbing refrain overwhelms the energy, and the song becomes indistinguishable from the rest of the album.

This is not to say that there aren’t decent lyrics. “Do What You Will,” for instance, has an arresting passage about flashbulbs from cameras reflecting in girls’ eyes—but the lyrics are barely audible. Too often the worthwhile lyrics fade into a breathiness similar to the sounds of the percussion and synthesizer, and the understandable ones just seem repetitive, almost too haltingly slow to follow. It seems that the artist intended for the listener to reflect their own moods and interpretations onto the lyrics, rather than asserting one himself—something apparent in both the vague sentiments and the opacity of the mood in a lot of the work. While this might occasionally prove an effective stylistic conceit, the result in this case feels apathetic instead of genuine. In “Do What You Will,” the vocalist addresses a lover, but the melody is static and unemotional—so much so that the experience becomes abstracted. There’s little humanity in the way the vocals are sung. Even in instances when the instrumental sound of a song varies—“Charades,” for instance, starts out with a haunting electronic melody distinct from the usual tepid backdrop—the music tends to lose momentum and one song begins to sound like another as each fades wistfully into the roll and crash of the synthesizer.

While the bleak aesthetic and understated sentiment may be an integral part of some psychedelic or indie genres, “Fading Parade” fails to make the sound consistently interesting enough to justify the muted nature of some of its other elements. There are moments of musical interest—the trembling melody at the beginning of “White Are The Waves,” and the coda of “Chills,” for instance—but this sort of music becomes rather tiring with repetition, and ultimately often fades into the wispy, synthesized backdrop. The album is built upon an uneasy need to feel something, but nothing it can produce or demand of its listeners ever amounts to true emotion.