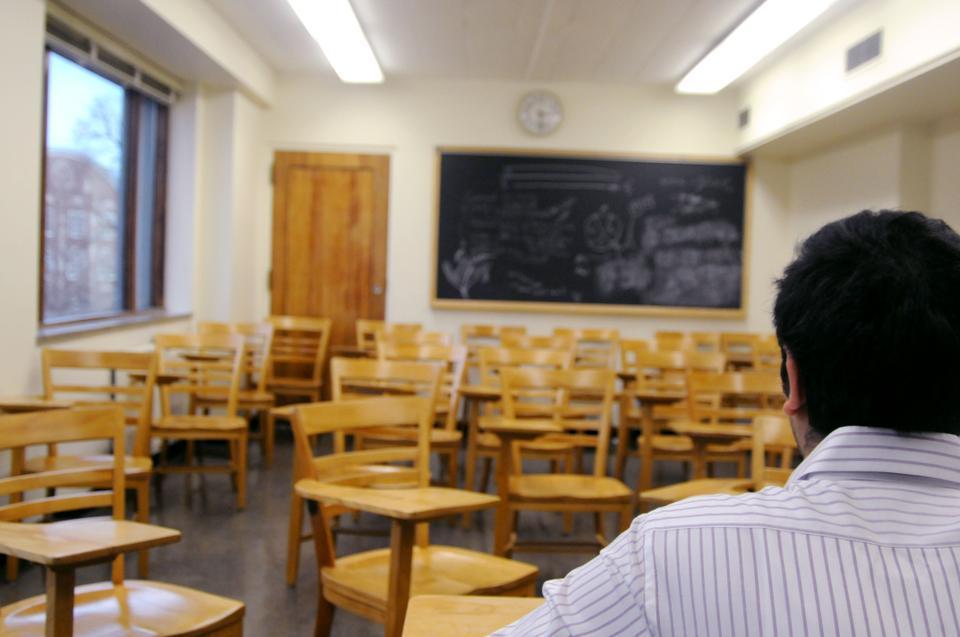 He’s a best-selling author and teaches one of the largest introductory courses at Harvard. But Psychology Professor Steven A. Pinker says that during his office hours, he finds himself awaiting the knock of an intrepid student.

Pinker says that over the course of the semester, only one or two students will show up at his scheduled office hours. Another five to ten will make appointments.

The administration of the Faculty of Arts and Sciences, coming away from a debilitating budget deficit, has returned its focus to strengthening the school’s commitment to teaching and learning—a campaign that includes building student relations with the top faculties in the world.

But Pinker isn’t unique in his situation at the College. Harvard professors interviewed, who teach some of the largest introductory courses, say they often spend their office hours alone.

“When I’m standing on the stage in Sanders, I do feel very distant,” says Economics Professor N. Gregory Mankiw, who teaches Ec 10, the introductory economics course.

He says that this perceived distance may keep students from approaching him outside of class—only two or three come to his office hours each week.

“I suspect there is something of a divide,” says Pinker, echoing Mankiw’s comment on large courses. ”Some students just feel bashful.”

Many students say they are concerned that their understanding of the material is not advanced enough to engage in a worthwhile discussion with their professor.

And in courses that break out into a multitude of sections, students acknowledge that reaching out to the sole (and often high-profile) professor can be intimidating.

“I’d be embarrassed to just go and ask questions about reading I was confused about and waste the professor’s time,” Ec 10 student Celestine E. Warren ’14 says.

But Economics Lecturer Jeffrey A. Miron says that professors are prepared for even the simplest questions, and he encouraged students to ask basic questions so that they might be able to learn to ask harder ones.

Ec 10 student Paul A. Leroux ’14 says he once stopped by Mankiw’s office hours, but his section leader is still his go-to source for questions about class work.

“Mankiw has always been pretty approachable. He couldn’t have been friendlier,” said Leroux, who said they had a two hour conversation.

“I just haven’t had relevant enough questions,” he says. “I would like to go again in the future, but if it’s between that and finishing a problem set, I’d be more inclined to finish that problem set,” he says.

YOU AND US JUST TALKING

But departments across the College are brainstorming how to draw students to their faculty.

The lack of interaction between overworked students and busy professors troubles Psychology Professor Mahzarin R. Banaji, the head tutor in the Psychology Department

“I know [students] are all running in many different directions, but what Harvard would like to do is to create much more interaction between undergraduates and faculty,” says Banaji.

“I do want to see more of you and us just talking together,” she says.

While the office hours system is unlikely to change in the near future, Banaji says the department has developed new programs to foster communication between concentrators and faculty.

The Psychology Department now hosts monthly dinners with a faculty member and ten to fifteen students in an undergraduate house.

Banaji says both faculty members and students are “having a blast” at these dinners.

“For me, the ideal way to promote student/faculty communication is to have smaller classes, so students and faculty interact in a way that is natural, important, and useful. This then provides a foundation for additional discussion, friendship, and collaboration,” Miron says. “It just becomes the norm for students and faculty to interact.”

Economics Department Chair John Y. Campbell says that the department is currently offering an increasing number of small classes through the recently reinstated junior seminar program, which was cut in the wake of the financial crisis.

Some professors have undertaken their own creative adjustments to ensure students come to their office hours.

Biology Professor Robert A. Lue, who teaches the introductory course Life Science 1b, says that holding office hours in Annenberg has helped encourage students to stop by with their questions­—attendance last semester ranged from four to fifteen students per session.

Biology Professor Daniel L. Hartl says that he hangs around after lecture, and that’s when he gets most of his face time with students.

“I was told when I arrived here that there was a genuine, palpable lack of students at offices hours,” says Government Professor Eric A. Beerbohm, who teaches Government 10: “Foundations of Political Theory.”

But he says that he maintains a steady stream of four or five students per week.

The philosophical discussions of the class overflow into office hours, but he says that reminders and encouragement to come may be the strongest motivator.

“I found that what really changed it, was all you really have to do is ask them to come.”

—Staff Writer Julia L. Ryan can be reached at jryan@college.harvard.edu.

—Staff Writer Kevin J. Wu can be reached at kwu@college.harvard.edu.

The Mar. 3 article "Office Hours Draw Few Students" misstated the course taught by Professor Robert A. Lue. It is Life Sci 1a not 1b.