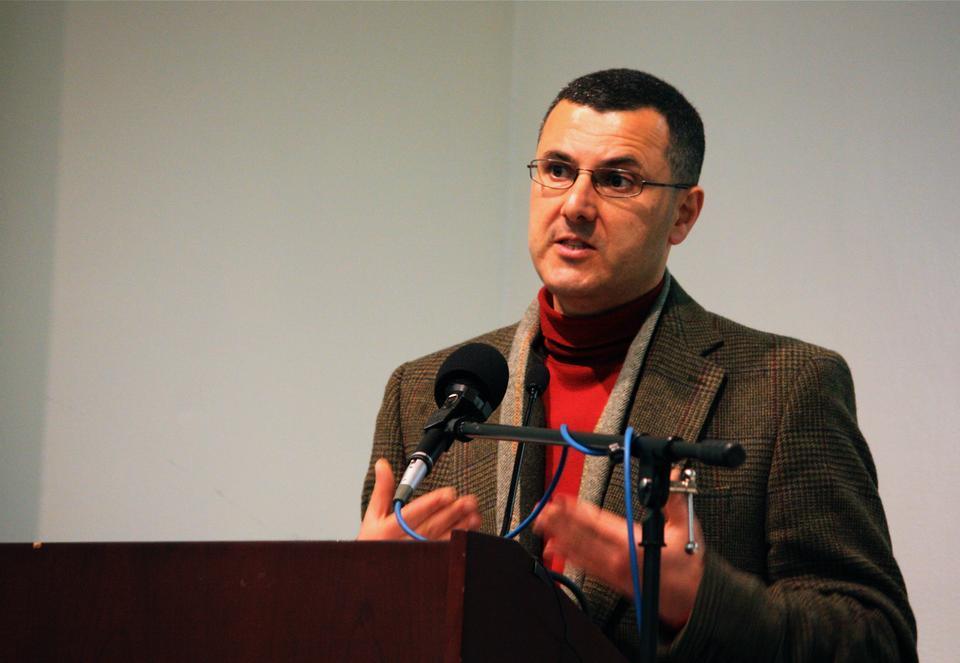 Omar Barghouti speaks on the global stuggle for the rights of people in Palestine yesterday. The talk was followed by a moderated question-and-answer discussion with Dr. Alice Rothchild of the Harvard Medical School.
By Monica M. Dodge, Crimson Staff Writer

Omar Barghouti, a Palestinian activist and one of the founders of the Palestinian Campaign for the Academic and Cultural Boycott of Israel, said that Israel is currently functioning under a system of apartheid at an event sponsored by the Palestine Solidarity Committee and the Institute of Politics yesterday.

Barghouti, who is on a tour for his new book “Boycott, Divestment, Sanctions: The Global Struggle for Palestinian Rights,” said that Israel’s current system draws a distinction between Israelis and Palestinians in applications for citizenship.

Because of this “apartheid” system, Barghouti challenged the idea that Israel should be a respected democracy on the international stage.

Barghouti’s visit to the United States came after months of waiting as he initially applied to the U.S. Consulate in Jerusalem for a visa in October. He was notified that he was granted a visa in January, but did not receive it until March.

Although he was not officially told of any reason for the visa delay besides “pending further administrative processes,” Barghouti said that he believed the delay was politically motivated.

In response to critics who suggest that allowing refugees to return and giving Palestinians equal standing in Israel is an attempt to destroy Israel by shifting the country’s demographics, Barghouti said that their argument reflects badly not on Palestinian activists, but on the state of Israel.

When asked about how Palestinians should combat Israel, Barghouti said that he supports a non-violent approach.

“Even the oppressed, even the colonized do not have a blank check to attack indiscriminately another community, so I can never condone any attack on non-combatant Israelis,” he said.

However, he added that it is not the oppressed, but the dominant powers who are always the instigators of the violence.

“There is absolutely no comparison in the level of violence perpetrated by the perpetrator, the occupying power, and that of the resistance,” said Barghouti. “To end all violence, you must eliminate the roots of violence, which is occupation and apartheid.”

Despite his criticism of Israel, Barghouti described himself as a “universalist” as he rejects all types of injustice, including anti-Semitism.

Students said it is important to bring the Palestinian voice to campus because they believe it is one that is not readily available.

“I’m glad he got his visa and was able to come to Harvard, because I feel like its such an important movement and one of the most peaceful ways to solve the problem,” said Asmaa Rimawi ‘14. “It’s something Harvard needs to start thinking about.”

­—Staff Writer Monica M. Dodge can be reached at mdodge@college.harvard.edu.

The April 14 article "Barghouti Urges Israel Boycott" misstated where Omar Barghouti received his visa. It was the U.S. Consulate in Jerusalem, not the U.S. Embassy, which is in Tel Aviv, that granted him a visa.