“Arna’s Children,” a film by Juliano Mer-Khamis, screened in memorial to its maker 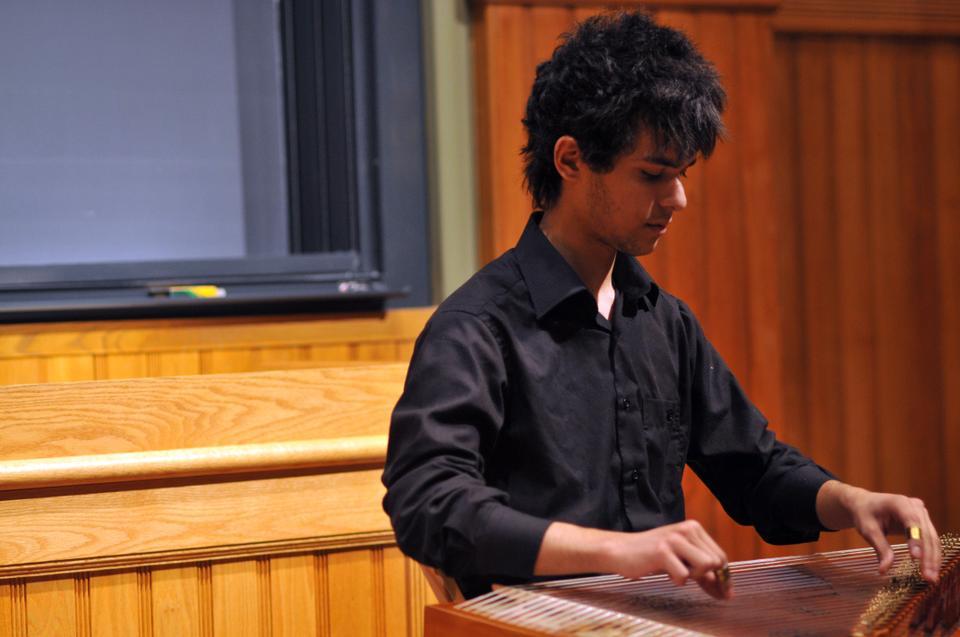 The screening of “Arna’s Children” was preceded by a musical performance and recollections of Mer-Khamis by friends. By Cynthia Wu
By Aisha K. Down, Contributing Writer

A young Palestinian boy in a theater with whitewashed walls pivots to the audience, barely containing a delighted grin. “If the princess brings the sun into the palace, she will be queen. So, if I bring the sun into the palace … why, then, I shall be king!” He breaks into his best-rehearsed evil laughter, a “mwa-ha-ha-ha” that leaves his eyes sparkling above his nefariously wriggling fingers. As the boy, Yousef Swetti, exits the stage, a voiceover matter-of-factly announces that he will die ten years later as a suicide bomber in Hadera. The film cuts to a clip of the video he made with his friend Nidal as the two—dressed in camouflage with the picture of a dead Palestinian girl behind them—prepare to carry out their attack.

“Arna’s Children”—shown in Sever last Monday as a memorial to its maker, Juliano Mer-Khamis, who was shot by Palestinian militants on April 4 in Jenin—is a documentary with few adornments. Though it depicts a brutal situation, it is not graphic—at least, not excessively so. The film’s power comes instead from it being relentlessly true. It spares neither the promising lives of the young children it depicts, nor their untimely, often harrowing deaths. Though the story it portrays—one of children whose lives are marked by violence and end in violence—is one ripe for philosophizing or making political points, Mer-Khamis overtly does neither. His focus is instead on the humans in the situation—his mother Arna, still picketing the Israeli occupation troops after being diagnosed with terminal cancer; the children roughhousing in the theater and art school she set up in a refugee camp in Jenin; and those children when they’ve grown up, as they plan to put a landmine at the entrance to their camp.

Juliano Mer-Khamis, an actor and filmmaker, continued his mother’s theater for Palestinian children in Jenin after her death, renaming it the Freedom Theater. Though Mer-Khamis was himself half-Israeli and half-Palestinian, he preferred to describe himself differently, saying “it’s not half-half. It’s one hundred percent-one hundred percent.” He worked on many vaunted Israeli film projects with some of the country’s best directors, even as he always returned home to his theater in the West Bank.

Allie Chen ’10, who helped organize the memorial screening, said that this openness and humanity was a perspective that informed Mer-Khamis’s art and the way in which he treated his subjects. Chen, who worked as a dance choreographer in the Freedom Theater for the better part of two summers and knew Mer-Khamis and his family personally, recounted how “his pedagogy was not to lecture or pontificate or to say what is right or wretched … he was a human being first and foremost. What matters is freedom and laughter.”

Thus, while “Arna’s Children” documents children sitting next to the ruins of their houses and the young laughter of men who grow to become suicide bombers, its intent is not so much to make a point about the Israeli-Palestinian conflict as it is to cherish and celebrate the humanity of its subjects. We see, through the course of the film, countless shots of the plays that the children carefully rehearsed, and, later on, how they light up when reflecting on their acting experiences. Though the children’s deaths are a part of the documentary, they do not overwhelm it. Rather, by stating the fact of their deaths early on, Mer-Khamis manages to move beyond their violent ends, making their lives more important. He draws his audiences into the families of the children, into their houses and their vivid lives. Mer-Khamis’s art is his capacity to frame so many charged situations without becoming polemical or nihilistic, capturing reality in all its complexity.

Complexity was a word often applied to Mer-Khamis himself at the memorial. One speaker recalled how the filmmaker once comforted his daughter in Haifa over the phone after a terrorist rocket had struck nearby—while at the same time ferrying two Palestinian militants hidden in the back of his car into the West Bank.

In the wake of Mer-Khamis’s death, the work of the Freedom Theater will continue, and envelopes for donations were passed out at the memorial screening. Chen characterizes its work as “the very humble … mission … to say that ‘we cannot speak for what you go through. All we know is that you have suffered deep emotional trauma, and you may often be beset with the burden of feeling that you don’t have anything to live for.’” Encapsulating this message in film, “Arna’s Children” proves a fitting memorial to its creator and his life’s work.