As Diplomas Change from Latin to English, Students Join in Protest 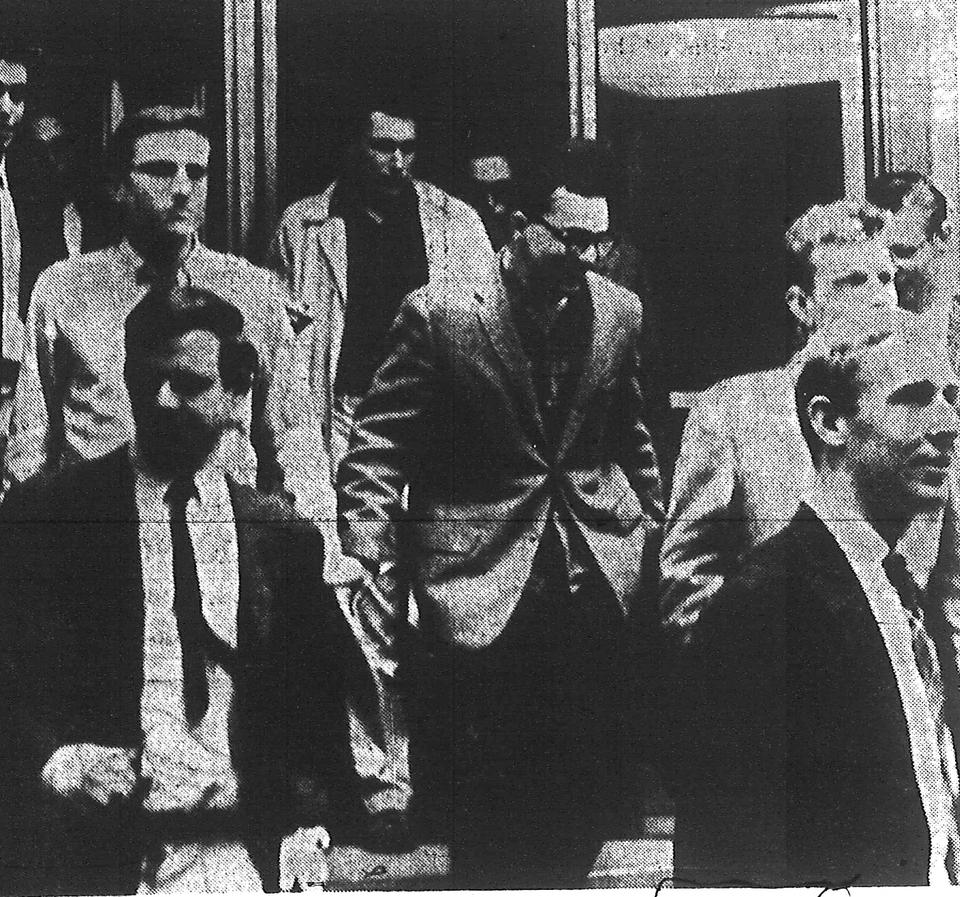 Students flood into Lamont Library on the night of April 28, 1961 amidst protests of a change in the language of Harvard diplomas from Latin to English.
By Erika P. Pierson, Crimson Staff Writer

Despite being a Harvard College alumnus, Charles D. Ravenel ’61 does not have his undergraduate diploma hanging on his office wall. Instead, his eight-and-a-half by eleven sheet of paper, declaring the completion of his studies at Harvard, lies tucked away out of view.

Like many of his peers, Ravenel was upset by the College’s decision to change diplomas from the traditional Latin to English—a switch that set off a flurry of lighthearted but sincere protest in the spring of 1961.

“It was so unseemly for the dignity and history of Harvard,” Ravenel says. “It certainly wasn’t something graceful, something stately, or something worth putting on the wall.”

The news that the Class of 1961 would be the first class to be given English diplomas was not well received. On Wednesday, April 26, 1961, the change incited more than 2,000 students to crowd the steps of Widener Library. The next night, The Crimson reported that nearly 4,000 boisterous students showed up—though participants remember far fewer.

After hearing the news that the diplomas would be changed, as the first class marshal, Ravenel was approached by numerous students disconcerted by the change in tradition. Ravenel attended a meeting with University President Nathan M. Pusey ’28 on behalf of students to voice their concerns.

Ravenel recalls the meeting as wholly unproductive. After proposing a number of ideas to Pusey, including having seniors opt to pay for traditional diplomas—which, in addition to being written in Latin, were larger and more elaborately printed—Ravenel left with a resounding “no” ringing in his ears.

“He wanted complete control,” Ravenel says. “He wouldn’t budge an inch, and no one could stop him.”

The Crimson reported at the time that Pusey believed issuing diplomas in Latin would be hypocritical given that Latin neither remained a requirement for Harvard undergraduates, nor was it any longer the universal language of academia. But a number of students also say that they suspect the cost of diplomas played a large role.

Few undergraduates found Pusey’s answers satisfactory, and rumblings of discontent continued to grow in the days after the announcement was made. A group of students hung a sign from their Leverett House window declaring: “We Want Latin,” and petitions gathered several hundred signatures in support of the tradition.

“It wasn’t just an English diploma, but a really silly looking English diploma that was not in keeping with what a Harvard graduate should look like,” Michael Abbell ’61 says.

“We decided we wanted someone to put some pressure on President Pusey,” Ravenel says.

On the first day, as students cried “Latin si, Pusey no,” on the steps of Widener Library, crowds gathered as Phillip A. Stone ’62 gave a speech in Latin in favor of keeping the traditional diplomas.

But Pusey had his own witty retort.

In response to the frustrated mass of undergraduates, the University president delivered a poem:

Or chic in Greek

The words did little to quiet the students, however, as the protest gathered force on Friday, bringing even more students to the Yard—much to the chagrin of University administrators.

Ultimately, as the crowd continued to grow despite efforts to avoid conflict, the police were called in to disperse the students, reportedly using tear gas and smoke bombs.

Students, who viewed the protest as peaceful and all in good fun, were offended by the use of force, recalling that the administration did not seem to understand the nonthreatening nature of the demonstrations.

“I think there were very few people who really cared but it seemed like something to make a fuss about,” Elliot S. Gershon ’61 says. “I think the weather was good and people needed a break.” Gershon also says he suspects that for a few students “a couple of glasses of wine” might have played a large part in the outcry.

“It was pretty much a tongue and cheek riot—if you want to call it a riot,” Abbell adds.

But many of those involved also feel as though their protest was not without significance.

“We wanted to make our unhappiness known and we did very elegantly, I think,” Paul M. Meo ’61 says. “It was in the spirit of fun and Pusey shouldn’t have unleashed the police on us, but he did.”

With the arrival of the police, Meo, who describes himself as “perhaps more excitable than others,” led a charge over the fence to Pusey’s residence, where he was cornered after throwing bread at responding officers.

“In those days things were handled much less bureaucratically,” Meo says. “So I wasn’t officially arrested but you can imagine what my parents thought when they opened the Boston Globe a few weeks before my graduation and saw their son being led away by the cops.”

In spite of the run-in with the police, Meo was still allowed to graduate without severe punishment. However, the bottom of Meo’s transcript now has a small caveat: it states that he was officially admonished by the University for behavioral misconduct.

“Luckily it was so small that no one really noticed it,” Meo says.

After the raucous weekend it became clear to students that the diplomas they were to receive would remain in English. Their displeasure had been noted and there was nothing left for them but to move forward and collect their “less than handsome” certificates, as Ravenel calls them.

“We raised a bit of hell,” Meo says. “But compared to what happened [later] in the ’60s this was a very mild protest indeed.”

Although the graduates were later offered an updated version of the diploma—still in English, but more like the former Latin version in appearance—many graduates chose to keep the diplomas they had received at Commencement.

“It was sort of a trophy in its sense of uniqueness,” Abbell says.

“I’m tempted to buy an old diploma off of eBay and change the name and date,” Ravenel says. “Just redo the damn thing.”