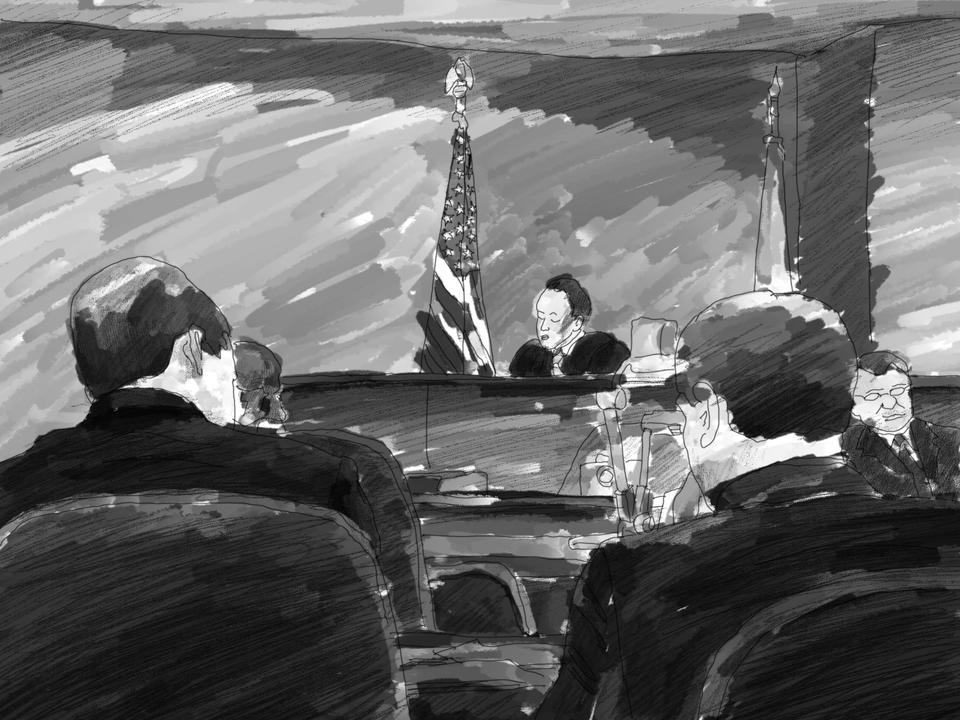 Illustration of the courtroom during the Copney trial for the murder of Justin Cosby.
By Xi Yu and Julie M. Zauzmer, Crimson Staff Writers

In May 2009, Brittany J. Smith was two weeks away from graduating from the world’s most prestigious university.

Raised in Harlem in New York City, Smith had overcome a tough upbringing by making her way into an application-only public school, graduating in the top of her class with a slew of leadership positions under her belt, and gaining acceptance to Harvard.

Yet just as she stood poised to receive her Harvard diploma, Smith’s hard-won gains suddenly came crashing down.

In the basement of a Harvard dormitory, a young man was shot and killed during an attempted drug robbery—and Smith rapidly found herself dismissed from Harvard, under interrogation for her boyfriend’s involvement in the murder, and then under arrest herself.

That fatal shooting which shattered the springtime serenity of Kirkland House inflamed discussion about drugs, safety, and race at Harvard, but two years later, the fervor on campus has largely died down. Yet for Smith and many others whose lives were touched by the violent incident, the tragic saga is far from over.

In the wake of her boyfriend Jabrai Jordan Copney’s sentencing to life in prison without parole, Smith, 24, is next on the court docket.

The two targets of prosecution were just young lovers two years ago. Their relationship, sustained despite stormy conflicts, catapulted them both to the moment at which Copney participated in a murder at Harvard and Smith was forced out of the gates.

Smith and her attorney, John T. Osler, did not return requests for comment on this story.

Smith was proud of her Harlem roots, making it clear that she had experienced a tough childhood, according to a Harvard classmate.

He recalled that Smith “played the part of someone who had street sense.”

Smith charted a stellar record through the New York school system. She was a standout student at Frederick Douglass Academy, a public preparatory school in Harlem, from which she graduated in 2005.

At the academically intense school—where classes meet six days a week and college counselors push students toward higher education—Smith immersed herself in the “most rigorous academic curriculum,” according to Principal Gregory M. Hodge.

“Brittany Smith had a wonderful education here,” Hodge said. “A model student at the school—she was a very, very good candidate for an Ivy League [college].”

Smith held leadership positions on the student council, Hodge said, and volunteered much of her time outside of class. She tutored younger students preparing for the SAT, served as a big sister in a mentoring program, and coordinated canned food drives.

Her service to her Harlem community did not stop after graduation. After her freshman year at Harvard, Hodge said, she collaborated with three high school classmates to establish a scholarship fund to help defray the costs of travel and textbooks for female seniors at Frederick Douglass headed to college.

Smith had made her way from Harlem to Harvard—and had found a way to bring the benefits of her new home back with her.

Smith’s Harvard classmate recalled that she often commented on the distinction between fellow black students from different socioeconomic backgrounds. Smith would speak disdainfully of those from ritzier parts of New York City and would complain that Harvard students were insensitive to the struggles of blacks and ignorant of the realities of life in poverty.

“It’s difficult to take someone that is into the street life and come to a college campus,” Hodge said.

He said that although Smith received a “phenomenal” education at Frederick Douglass and had even greater academic opportunities at Harvard, “for some reason or somehow, the young lady made poor decisions.”

Ill at ease with several aspects of campus culture, Smith found in Copney, 22, someone with whom she shared a hometown. Copney, an aspiring songwriter, was also from Harlem. Beginning in 2008 the two forged an intense, at times rocky relationship that would contribute to their mutual downfall.

“We’re either like at a really good point or a really bad point,” Smith said in court in March 2011, when she affirmed that she and Copney were still dating. “We had disagreements about, yes, a lot of things.”

The classmate recalled noticing, “It seemed like going back and forth, complaining about him and other times in love with him.”

Friends of Smith note that she may have had cause to complain. Chanequa N. Campbell—one of Smith’s best friends and the other student who was not allowed to graduate from Harvard in the shooting’s aftermath—agreed with the prosecution’s description of Copney as “jealous” and “controlling” of Smith.

“They had a pretty tumultuous but passionate relationship. They were committed to each other,” Campbell said.

That commitment ran deep. Smith said that the two were “basically planning a future together.” By her senior year, they lived together in her Lowell single, said Cambridge Police Detective John W. Crowley in court.

But the relationship was still fraught with conflict.

According to Smith’s testimony in a hearing, Copney at one point ordered her to get rid of evidence, such as framed photographs and stuffed animals, of a relationship that ended about two years before she began dating Copney. She told Copney that she had thrown away the items. But in fact, she had stowed them under her blockmate’s bed—a spot she would later reuse as a hiding place when Copney asked her to conceal the murder weapon.

So when Copney found more relics of the old relationship, he was furious.

One day while Smith was at work at Harvard Student Agencies, Copney came across online chat conversations between Smith and her ex-boyfriend and uncovered an envelope with photographs of the former couple.

“You’re still keeping shit from me,” he said angrily as they walked to Tommy’s Value, the Mt. Auburn St. convenience store, Smith recalled in court testimony.

About a month after the fight, Copney and Smith decided to start dating again. Copney moved back to Harvard, and about six weeks later, he invited his friends to join him there to conduct a robbery.

Much of the prelude to the Kirkland shooting unfolded in Smith’s Lowell House dorm room.

There, Copney and his friend Blayn Jiggetts attended a party during Harvard-Yale weekend where they met a Yale drug dealer whom they would later allegedly rob at gunpoint of three pounds of marijuana.

There, Copney brought Jiggetts and Jason F. Aquino on May 18, 2009, planning to commit a duplicate robbery in Cambridge.

And there, Jiggetts loaded a semiautomatic pistol—the weapon that would kill a man before the day was out.

Posing as Harvard students, Copney and Aquino went to meet Justin Cosby, a 21-year-old Cambridge drug dealer whom Copney had met with the day before and arranged to buy a large quantity of marijuana. They urged Cosby to follow them to Kirkland’s J-entryway to conduct the deal.

In the entryway basement, Jiggetts pulled a gun on Cosby, and the three New York men told the drug dealer to hand over his wares. When Cosby refused and tried to run from the entryway, one of the men—Copney, according to Aquino, Jiggetts, and the Commonwealth of Massachusetts—took the gun and fired three shots.

One bullet struck Cosby in the abdomen, and, by the next morning, he was dead.

While Cosby staggered down Dunster Street bleeding and asking for water, the three men returned to Smith’s room in Lowell.

Then Copney handed the gun to Smith. She took the weapon, rushed two entryways over to her blockmate’s room, and hid the firearm under her blockmate’s bed. Then she called a taxi to serve as their getaway car, taking them to South Station where they boarded a bus to New York.

Smith accompanied the men on that trip but returned to Cambridge the next day, where she first met with police.

Afterward, with Copney in jail, Smith moved in for a time with Copney’s mother, though as of March, then out on bail herself, she was living on her own and working in a New York retail store.

Since his arrest, Copney and Smith appear to have carried on their relationship, and prosecutors have used continued contact between the two as evidence that Smith has motivation to lie to protect Copney. Prosecutors have entered into the record jail visits and phone calls in which Smith has expressed her desire to marry Copney.

At a March hearing that centered around whether Smith’s lies to investigators were cause to bring her to trial, lead prosecutor Daniel J. Bennett ’85 to ask, “Miss Smith, you’d do anything to help Jabrai Jordan Copney, wouldn’t you?”

“Here,” to be precise, is the Middlesex County Superior Court in Woburn, Mass. where Smith may soon stand trial for six criminal counts that include possession of a firearm and accessory after the fact to murder.

Smith had signed a non-prosecution agreement in exchange for her cooperation in the case. But prosecutors said she violated the deal by making numerous untrue and misleading statements, including her claim that she did not see the gun loaded before the incident and her failure to disclose information about the prior robbery of the Yale students.

Announcing that the deal was off because Smith had not upheld her end of the bargain, the Commonwealth indicted her in March 2010. Smith’s attorney responded by asserting that the agreement still stands and that Smith cannot legally be charged.

A Superior Court judge has had under advisement for months the question of whether Smith can indeed be tried. As of now, the judge is set to rule on the matter by June 10.

But at the conclusion of the most recent court action in the case—the sentencing of Aquino, who along with Jiggetts pleaded guilty to manslaughter in Cosby’s killing—District Attorney Gerard T. Leone Jr. ’85 issued a statement indicating that she will be tried.

“Our efforts continue as we turn our attention to ... the trial of Brittany Smith,” he said.

Ruminating on Smith’s turbulent trajectory, Hodge said that Smith’s time at Harvard “should have resulted in a different outcome.”

“I think sometimes the challenge for young people is that ... they can’t bring people or mix up two different worlds,” Hodge said, referring to Smith’s decision to bring Copney from New York to Harvard with her.

Reflecting on his erstwhile star student, Hodge was regretful.

“We’re very disappointed at the sort of situation that this student got herself into.”