I Don't Know How She Does It -- Dir. Douglas McGrath (The Weinstein Company) -- 3 Stars 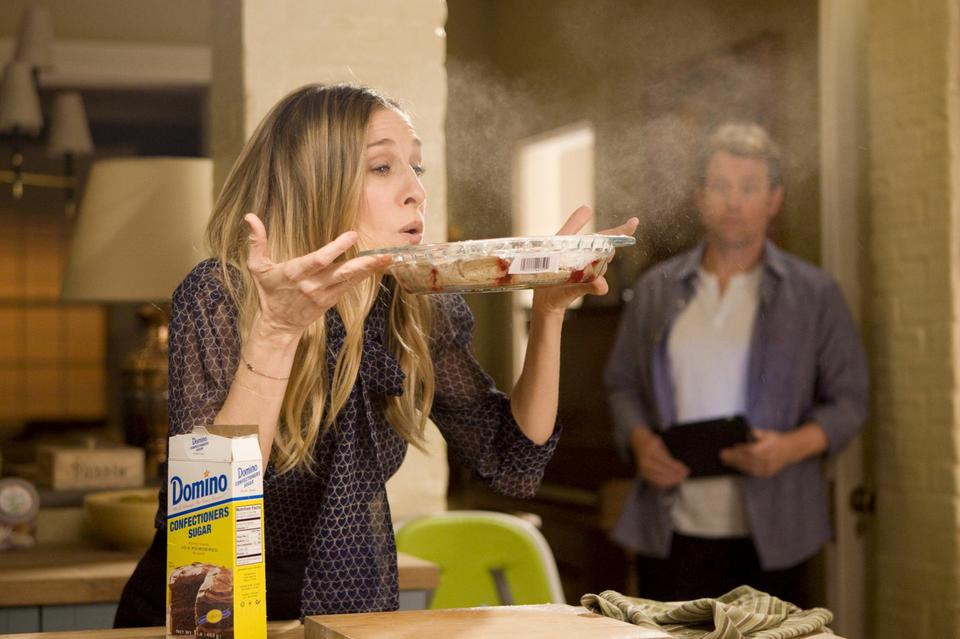 Kate Reddy (Sarah Jessica Parker) juggles family and work in Douglas McGrath’s new film, “I Don’t Know How She Does It.” By Courtesy of The Weinstein Company
By Ola Topczewska, Contributing Writer

Supermom. Soccer mom. Co-parent. These are just a few of the expressions that have emerged to describe the increasingly complicated roles played by women in contemporary society. “I Don’t Know How She Does It,” a new comedy directed by Douglas McGrath, attempts to make light of the struggle many of these women face when balancing work and family.

Adapted from Allison Pearson’s 2002 novel of the same name, the film tells the story of Kate Reddy (Sarah Jessica Parker), a busy Boston financial executive with two young children. Kate shoulders most of the financial burden for her family while her husband Richard (Greg Kinnear) transitions between jobs. After she accepts a major new account that demands frequent trips to New York, Kate finds herself with more responsibilities than she can manage. The job also places her in regular contact with a suave new business partner named Jack (Pierce Brosnan). Alongside these mainstays, Olivia Munn delivers a convincing performance as Kate’s steely, childless, and Harvard-educated assistant, Momo, who is bemused by her boss’s decision to juggle both a family and a rigorous job. Christina Hendricks, best known for her work on HBO’s “Mad Men,” joins Parker on the big screen as Kate’s best friend and fellow working mother, Allison.

In the world depicted by screenwriter Aline Brosh McKenna, women are each other’s most vicious saboteurs. They turn birthday parties and workouts into competitions, criticize each other’s appearance “Mean Girls”-style, and pass judgment on that most unforgivable of failures: bringing a store-bought pie to the school bake sale. McKenna’s past work includes the 2008 flick “27 Dresses” (dir. Anne Fletcher) and the 2006 hit “The Devil Wears Prada,” (dir. David Frankel) another movie that touches on workplace power dynamics. Alas, “I Don’t Know” lacks the sass and snappy dialogue of “Prada.” Despite its talented cast, the film merely rehashes a familiar set of stock characters—the Office Jerk, the Supermom, the Critical Mother-in-Law—without doing much to shake up the genre, or our expectations regarding the plotline.

Kate, at her best, is endearing, relatable, and even occasionally funny. For 89 minutes, viewers get to watch her stumble around in heels, drop things, and generally careen from one near-disaster to another. But the performance is too often one-dimensional and predictable. We don’t know much about Kate’s personality, other than that she loves her family, and that she loves her job because, as she puts it, “the market doesn’t know what sex I am. It only knows if I’m right or wrong.” It’s difficult to believe in the chemistry between Kate and her husband, or to take seriously her nascent flirtation with Jack.

Perhaps to compensate for a sparse storyline, director McGrath—whose other works include “Emma” and “Infamous”—has interspersed the film with mock interviews with the characters. One character compares a working woman’s mind to a control tower at O’Hare International Airport. Another equates marriage with being “on parole.” Through these somewhat self-conscious exchanges, the film situates itself in an awkward middle ground between confronting sexual double standards and attempting to be a lighthearted comedy.

But the experience presented in “I Don’t Know” is relatively limited in scope. Whether squabbling with her husband in their spacious Boston apartment or spending long hours at the office, Kate always has the financial freedom to hire a child caretaker, not to mention wear clothes which look as if they could have belonged to another character Parker is famous for playing: Carrie Bradshaw of “Sex and the City.” Given this context, much of the movie’s mild moralizing rings hollow.

McGrath’s film is the latest in a long-standing tradition of movies about working women, a category that owes much to classics like the 1940s hits “His Girl Friday” and “Woman of the Year.” “I Don’t Know How She Does It” doesn’t quite live up to its predecessors, and while viewers may cringe at lines like “‘difficult’ is really just a word for anything that isn’t a man” or “trying to be a man is a waste of a woman,” the film does deserve credit for bringing up the issue of gender roles at all. Though the rest of us may take a pass, Parker fans and career parents may enjoy seeing the movie in theatres—after work, of course.