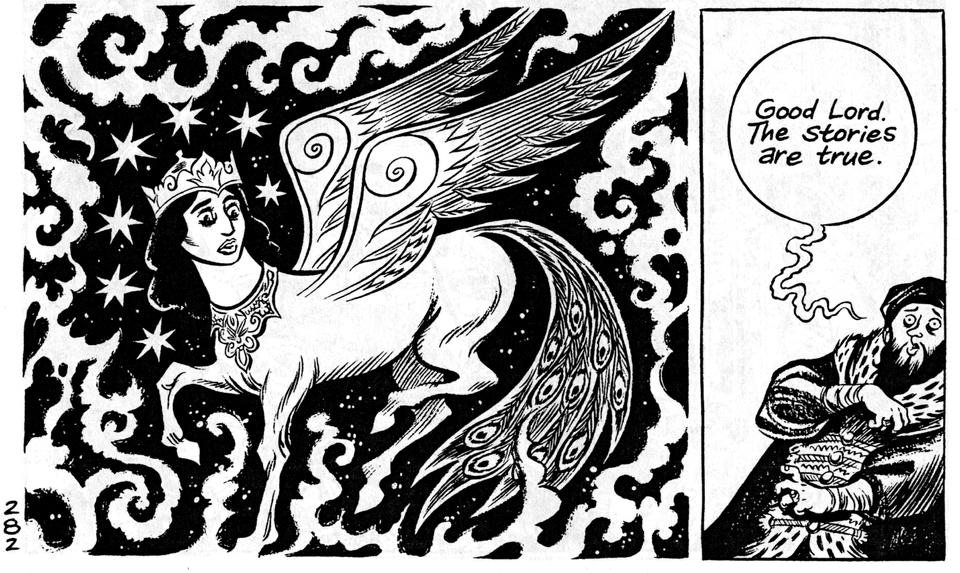 The balance between image and text is a delicate one for comic books. The interplay of two idioms on a single page, and the assumption of a reader familiar with both, creates certain tropes and effects that appear again and again. Think of Bill Watterson’s grandest "Calvin and Hobbes" Sunday strips, or Harvey Pekar’s conversation-heavy "American Splendor." The addition of a third dimension of interplay between text and image broadens the possibilities for expression, despite—or perhaps because of—the fact that most readers have no idea what it means and must be guided in its interpretation. That is one of the triumphs of Craig Thompson’s exquisite new graphic novel "Habibi." It tells the complex story of Dodola and Zam, two escaped child slaves, who are torn apart and undergo many transformations as they grow into new names and new bodies. When they are reunited at last, love blossoms despite the obstacles. At times "Habibi" resembles an Orientalist pastiche stuffed with odalisques and eunuchs, but its scholarly reinterpretation of Abrahamic tales from the Koran turns this saga into a lush commentary on love and lust, wealth and want, religion and storytelling.

"Habibi" comes eight years after Thompson’s acclaimed autobiographical "Blankets," a nostalgic coming-of-age story about vulnerability and first love in an evangelical Christian environment. Thompson was drawn to exploring the Islamic faith after the terrorist attacks on Sept. 11, 2001. "I wanted to humanize it a bit and understand it, and focus on the beauty of Arabic and Islamic culture," he said in an interview with The New Statesman. "My experience of speaking to Muslims was that they weren’t any different to the Christian communities I grew up in—they had the same morals and the same lifestyles, and the same stories that shaped their religions." In "Habibi," stories drawn from the Koran are interspersed with the trials of Dodola, a young girl who is prized for her beauty despite the fact that she is also intelligent and literate, and the younger Zam, a black boy whose guilt-ridden relationship with his surrogate mother leads to devastating choices.

Thompson’s style, like his syncretic narrative, takes full advantage of the Islamic tradition of calligraphic and geometric design, blending Arabic imagery with his trademark fluid Western inking. It appears that Thompson is inspired by the masterful layout work of Will Eisner and his long-held love for Franco-Belgian comics. His intricate tale follows a rigid structure: using an Arab North African talisman, which Thompson compares to Sudoku, as the book’s framework, he divides "Habibi" into nine chapters, each with its own number, Arabic letter, and distinct visual design. This strict organization is also reflected in his frequent use of arabesques that merge and contrast with his characters’ bodies, an unusual juxtaposition of the sacred and profane, since artistic representation of bodies is considered a sin in Islam.

Combining fairy-tale imagery with realistic conceits drawn from modern times, the world of "Habibi" is a contradictory one. It features a sultan, seemingly lifted from "One Thousand and One Nights," who keeps a massive hydroelectric dam for his personal hydration needs, and a magical ship adrift in an ocean of sand dunes bordered by oil pipelines and predatory caravans. Without wading very far into contemporary issues or portrayals of Islam—in fact, without going very far beyond a thematic and artistic representation of the religion—Thompson nevertheless hints at a long history of change and upheaval in the Middle East and North Africa. This tale of eroticism, luxury, and hunger in all their forms does not lend itself to a discussion of modern political tensions; at over 670 pages, "Habibi" is already densely packed with commentary and symbolism about artistic matters. Thompson himself has said that he has no political goal or agenda, and said in a recent interview with the online magazine Guernica that he is more interested in the intersections of old and new in the developing world.

For those familiar with "Blankets," Thompson’s latest might seem like a drastic departure—and judging by covers, though one shouldn’t, the blue-and-white simplicity of his debut is overshadowed by luxurious gold trim and rich color on "Habibi." However, there are similarities: for example, Thompson has expanded the surrealistic dream sequences of "Blankets" to entire chapters, working entirely in an imaginary land called Wanatolia. However, his reliance on Orientalist tropes in "Habibi" is surprising, considering Thompson’s sensitive and insightful portrayal of Christianity in his own community in "Blankets." In interviews, Thompson has called these choices "a self-aware Orientalism," where he works within stereotypes to subvert them. But the sensitivity of his portrayal is not obvious until the book’s conclusion, a purposeful gesture that nevertheless leaves many questions unanswered. The focus of "Habibi," however, is not political or even historical; the power in this tale lies in human passion, sometimes cruel and sometimes sweet, combined with its geometric precision and deep sense of the sacred.