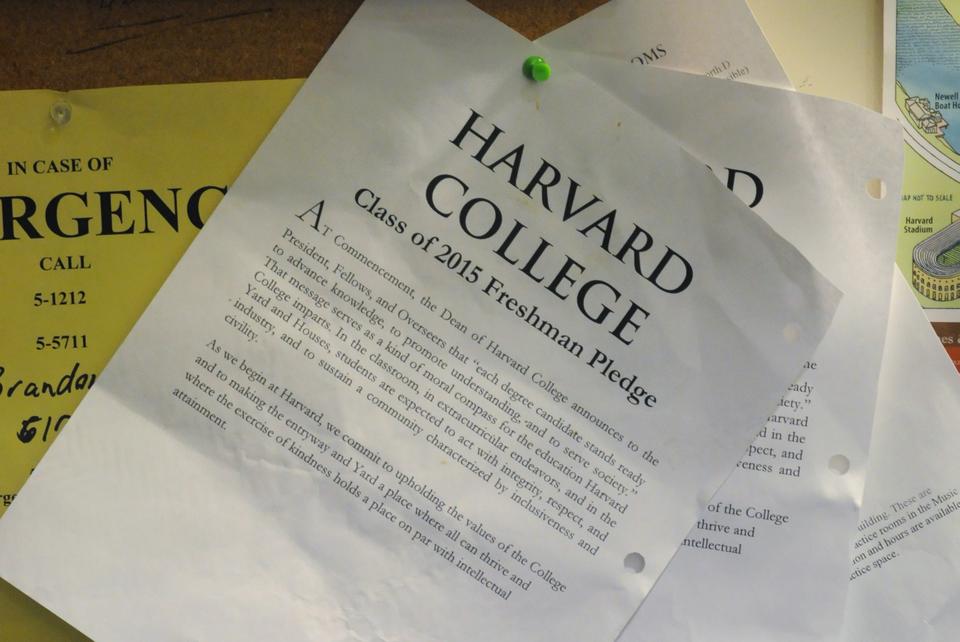 Members of the Class of 2015 were required to sign a pledge expressing their dedication to education and commitment to community.
By Hana N. Rouse, Crimson Staff Writer

Following controversy surrounding the decision to display students’ signatures on a new freshmen values pledge, the College will remove the signatures from the base of the documents before hanging them in freshman entryways, Dean of Freshmen Thomas A. Dingman ’67 announced Tuesday.

In an email sent to the Class of 2015, Dingman told students that although he and the Freshmen Dean’s Office stand behind the message of the pledge, concerns over its implementation caused administrators to reconsider including the signatures where they can be viewed publicly.

Freshmen were originally asked by their proctors to sign the pledge at the start of their convocation ceremony earlier this year.

The document asks freshmen to commit to making Harvard a place “where the exercise of kindness holds a place on par with intellectual attainment.”

Though students were told that signing the pledge was voluntary, critics said that freshmen were pressured into signing the document, both because it was presented to them by authority figures like proctors and because the signatures were to be displayed for peers to see. Some charged that readers would be able to figure out who had declined to sign the pledge based on whose names were absent from the signed papers.

Dingman said that it was “unfortunate” if individuals felt pressured to sign the document. “That’s not what we really intended at all,” Dingman said.

But he defended the choice to introduce the pledge in the first place.

“We all think it’s been a good thing and nobody is feeling apologetic for it,” Dingman said.

He added that although the College had not decided if it would issue an identical freshmen pledge to future classes, it would continue to push the messages detailed in its language.

“I don’t think it’s the signatures that matter at all, frankly,” Dingman said. “The really critical thing is to put out in very clear language that [freshmen] are joining a community that has expectations.”

—Staff writer Hana N. Rouse can be reached at hrouse@college.harvard.