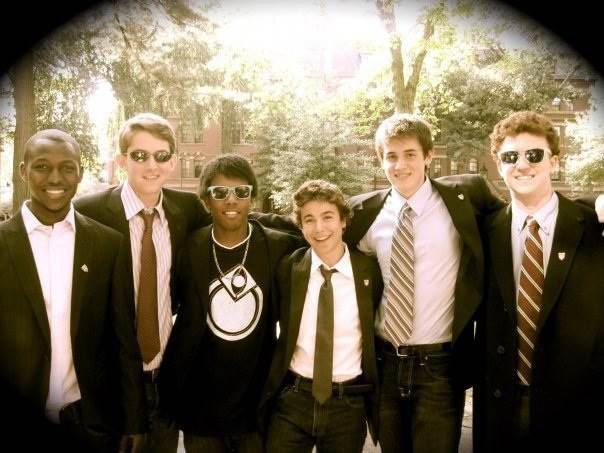 Philip Streich '13, second from left, poses with his freshman roommates from Weld on the day of Freshman Convocation. In addition to being a talented intellectual, Streich was also a social force for his class.
By Melanie A. Guzman, Crimson Staff Writer

At times an enthusiastic entrepreneur, a scientific prodigy, a political activist, a record producer, and a grandiose party host, Streich was among the most well-known members of the Class of 2013 during its first year at Harvard. Friends said Sunday that he will be remembered not only for his impressive accolades but also for serving as a socially unifying force for his freshman class.

“He was happiest at the center of anything,” said C. Tucker Pforzheimer ’13-’14, one of Streich’s freshman roommates.

Streich arrived at Harvard his freshman year already more famous than most students. A native of Princeton, N.J., who moved to Wisconsin in middle school, he had received numerous science awards, including the prestigious Intel Foundation Young Scientist Award, and had co-founded a nanotechnology company.

At 14, Streich enrolled at the University of Wisconsin—Platteville, where he began research on nanotechnology. A discovery about the solubility of nanotubes led him to co-found Graphene Solutions, which he continued to work on even as a student at the College. He left Harvard during his sophomore year to work more on the company and his many other projects.

Though Streich had earned renown as a teenage scientist, friends say that he was more interested in what he could accomplish socially on campus. At Harvard, he sought out the “quintessential college experience,” Pforzheimer said.

When he determined that his dorm room in Weld would not provide ample space for the kind of entertaining he envisioned, he rented an office in the Square to create a novel social space for freshmen.

“The Property,” as the office suite came to be known, attracted a cross-section of the freshmen class to both parties and low-key gatherings.

“[The Property] was the least socially stratified space at Harvard,” Pforzheimer said. “Anyone could go and anyone did.”

Regan Bozman ’13-’14, another of Streich’s freshman roommates, estimated that 60 percent of the class visited “The Property.” Though housed in an office building, Bozman described it as a natural place where blocking groups were formed and relationships started.

“I can’t imagine how other classes convened and met each other,” Bozman said. “It was like an unofficial student center.”

Even with the dedicated social space, Pforzheimer said a steady stream of students came to their door in Weld just for a chance to meet Streich.

Chloe L. Altchek ’13-’14, who lived in Streich’s entryway in Weld, said classmates referred to Streich as “the super genius.” But his humility stood out more than his intellect, she said. During conversations about his research, Altchek said Streich was down-to-earth about his accomplishments.

Though friends said the popularity of Streich’s dorm room led to more than a few run-ins with their entryway proctor, Justin Schoolmaster, Schoolmaster said Streich only got into “the best kind of trouble.”

Schoolmaster said there was never a dull moment when Streich was nearby.

“If I weren’t his proctor and I were in college, I would want to hang out with him too,” Schoolmaster said.

Though known primarily around campus for his scientific work and his stewardship of “The Property,” Streich had yet more claims to fame.

His Porsche, studded with parking tickets, could frequently be seen parked on De Wolfe Street by Leverett House, where he lived before leaving the College.

Through the record company which he founded along with friends, Streich released a single called “Drink Yo’ Milkshake” with Houston-based rapper Ally Smooch.

“Whenever he went in on one of his projects, it was completely open,” Pforzheimer said. “He brought all of us onto 91 Records.”

As he adopted new endeavors, he was always inclusive of others, friends said.

Pforzheimer recalled a time that Streich took him and other friends to an office where he once worked on Brattle Street. In the office, Pforzheimer said Streich opened up a safe that contained his original tubes of graphene from his research and a solar panel. Streich broke the solar panel into little pieces and gave one to everyone in the room.

“He wasn’t about to hold anything over your head and wanted everyone to be involved,” Pforzheimer said.

Streich’s welcoming nature left a lasting impression on others who knew him.

Even after he left Harvard, Streich spent the next summer frequently inviting as many Harvard students as he could to a hotel he stayed at in New York City. He once drove 15 hours in his Porsche, from Chicago to the Hamptons, N.Y., to visit friends.

“Since he was so accomplished, people kind of dwell on that, which is important and impressive, but he was a great guy, and that’s the part that hurts the most,” Schoolmaster said.

From planning parties to researching nanotechnology and more—in between, Streich found time to serve as his county Democratic Party treasurer in Wisconsin and to found a second company, focused on developing solar energy technology—Streich’s efforts were geared toward making a difference.

—Staff writer Nicholas P. Fandos contributed to the reporting of this story.