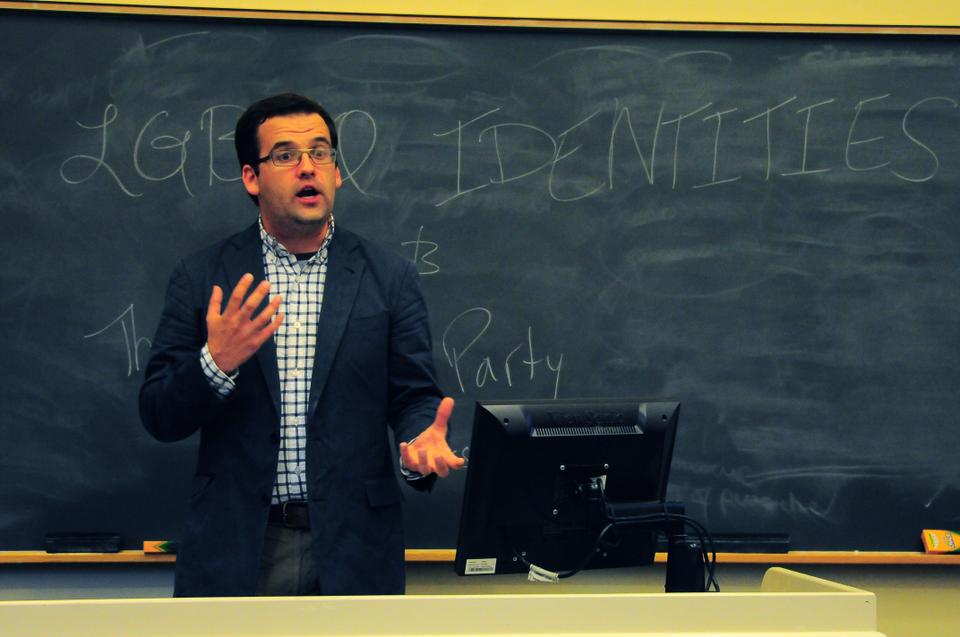 Christian Berle, campaign manager to Richard R. Tisei of Massachusetts, speaks about Tisei's sexuality and how it effects his candidacy in the Republican party. Tisei is running for the US House of Representatives in the 2012 election.
By Neha Dalal, Contributing Writer

If he wins his Sixth Congressional District race this November, Massachusetts Republican Richard Tisei will become the first Republican elected to Congress while openly gay. His coalitions director, Christian Berle, spoke about reconciling LGBTQ identities with Republican ideals on Friday at an event hosted by the Institute of Politics.

Tisei served in the Massachusetts State Legislature for 26 years, including four as minority leader of the State Senate. His sexual orientation “was one of those things well known on Beacon Hill but like many people, he did not feel the need to hold a press conference,” Berle said.

This changed when he ran for Lieutenant Governor in 2009, and advisers told him it was something the people had a right to know. Though his ticket lost the race, Tisei was “hailed as a strong asset to the ticket,” Berle said.

In this campaign, Berle said Tisei publicly countered the idea that being a gay Republican is an oxymoron. According to Berle, 3 out of 10 openly LGBTQ voters voted for John McCain in 2008, and, according to a recent Gallup Poll, 13 percent identify themselves as conservatives.

Berle, who is openly gay himself, argued that for LGBTQ voters, “[their] main focus, like the rest of the country, is jobs and the economy,” over gay-related civil rights issues.

“Throughout the nearly 12 months Richard has been campaigning, sexual orientation has rarely come up on the campaign trail—most often, those that ask are national media outlets,” he said. “Richard’s sexual orientation is just a characteristic of who he is, as would be being of Italian descent.”

Still, he said that the Republican party needs to change its stance on gay rights to be more in line with younger voters. Tisei has not encountered resistance from sitting members of Congress, Berle added, and hopes that introducing his partner of 18 years on Capitol Hill is one way to change their opinions about gay rights.

"None of the committees on the IOP have ever done anything like this," said C.J. Sutherland ’16, who organized the event.

"I know of students who are both republican and BGLTQ, but none personally. I'm as liberal as it gets," said Powell C. Eddins ’16. "It was interesting to hear how much of an issue it really is within the Republican community."

Yet Simon Gregory, a student at the Kennedy School, said that in the United Kingdom, where he is from, openly gay members of Parliament come from all parties.

“Our barriers have been broken down years ago,” Gregory said.

—Michelle Denise L. Ferreol contributed to the reporting of this article.