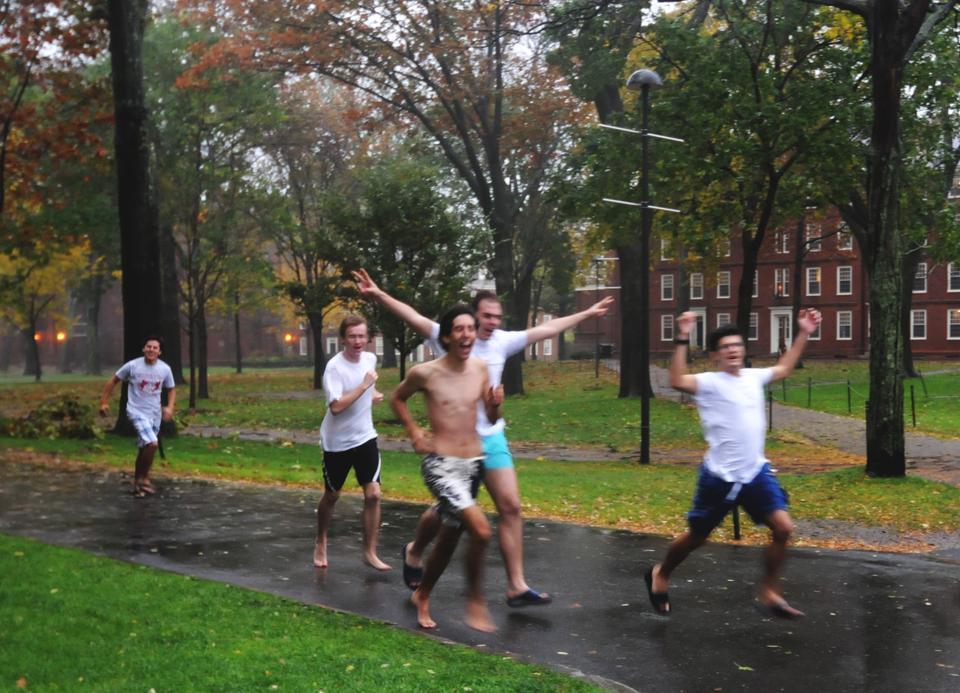 Students run through the Old Yard braving the weather of Hurricane Sandy. Due to high winds and rain many large tree branches and leaves were scattered throughout Harvard Yard, Tercentenary Theater, and the rest of Harvard Square.
By Indrani G. Das and Samuel Y. Weinstock, Crimson Staff Writers

“In the river houses, you could actually jump out of the second floor window,” Knoebel said. “That’s how high the snow was.”

Knoebel said that even after heavy snowfall that February, he and his classmates were still surprised that classes were canceled. “You never expected that to happen,” Knoebel said. The previous year, then-Dean of Students Archie C. Epps III said that Harvard would shut down “only for an act of God, such as the end of the world.”

Egyptology professor Peter Der Manuelian ’81, who was a freshman in 1978, said he was “a little surprised” that classes were canceled Monday but thinks the administration acted appropriately.

Manuelian said he remembers that the cancellation of classes when he was a student was a cause for excitement rather than fear. “At first it was a bit of a party atmosphere,” he said, although the College also provided a safe place to be during a storm, he added.

This time around, students and Cambridge residents say they were enjoying the thrill of the rare meteorological event—and the rare day off it allowed.

Cambridge resident Michael Kirsch described his day as “quite pleasant,” adding that he only “got flipped around once by the breezes.”

Brandon Arcilla, a Cambridge resident who originally hails from Texas, said that he was unimpressed by the storm’s severity.

“Honestly, this is absolutely nothing,” Arcilla said. “We got hit by Rita and Katrina. This is a walk in the park.”

Maria Huinh, a tourist visiting from Texas, said she was unfazed by the storm, and described walking around Harvard Yard as “an adventure.”

Connor B. Hinebaugh ’15, who was throwing a frisbee with a group of other students in the Quad Monday afternoon, said that their intramural game scheduled for Monday evening had been canceled.

That did not stop his team from playing anyway, in weather that Hinebaugh described as “not too bad.”

While some people ventured outside during the storm, most decided to stick with indoor activities. Jordan T. Weiers ’16 said that when he and his friends heard that classes were canceled, they threw open their dorm room window, blasted Whitney Houston’s “How Will I Know,” and later watched the movie, “The Help.”

“Other than that, I haven’t really done that much,” he added.

“It looks like it’s gonna be a storm that’s larger than anything that’s hit this part of the world for a while, so better safe than sorry,” Bestor said.

In an email, Professor Homi K. Bhabha wrote that the storm gave him a chance to catch up on his writing.

Bhabha wrote he also had planned a dinner party for Monday evening that would include “a dark and delicious braise of beef, pearl onions, spices and red-wine.”

When asked whether he thought canceling classes was disruptive, Bhabha said “not at all” and thought the administration’s actions were “absolutely appropriate, particularly for those who don’t live nearby.”

Government professor Daniel Carpenter wrote in an email that he found the day depressing, in part because of the inclement weather, but also because he watched his “beloved Tigers get swept by the Giants last night” in the World Series.

But Carpenter said the day off gave him a chance to spend time with his family.

“My children are home from school today, and so I got to play with them,” Carpenter said. “But then both of them humiliated me in Wii.”