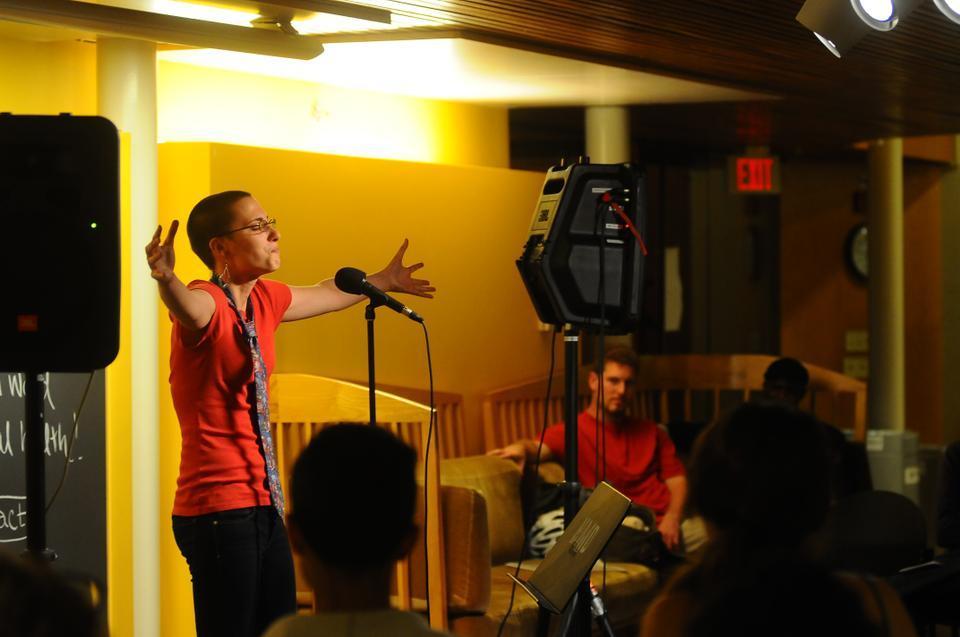 In an effort to break the silence on an often-stigmatized topic, members of the Harvard community gathered to share experiences with mental illness through spoken word, interpretive dance, and candid conversations at Friday night’s second-annual “Words on the Mind” open mic night.

Presented by campus groups Contact, Response, Room 13, Speak Out Loud, and the Student Mental Health Liaisons, the event aimed to spark conversations on a broad range of mental health issues.

Through artistic expression, students addressed a wide variety of painful losses—that of a friend to suicide, of a mother’s sanity to bipolar disorder, of a grandfather to Alzheimer’s disease, of a daughter’s relationship with her father following her decision to come out of the closet.

Capturing her mother’s struggle to escape a cage constructed by “the bars of genetics,” Amy C. Robinson ’15 presented her original work “Poem for My Mother.”

“She called us from the mental hospital, words slurred, thoughts blurred. She told us a story—not a story like fairy tales, not a story like when she lay next to me and whispered magical words into my ears and we both fell asleep dreaming, holding each other,” Robinson read as audience members snapped their fingers and nodded in support.

“I just want to show this to obliterate the stigma, disintegrate the enigma because she is the world. She is all religions, all beliefs. She is a caged tiger, trapped,” she said as the poem drew to a close.

Ben G. Blumstein ’15 performed an original poem that featured snapshots from childhood and ended with the image of “teeming clouds.”

His poem concluded, “I can see ’em still, I can see ’em. But am I going to be the westward flock chasing the spine of the sinking sun or the bird who will taste the eastern dark hopeful for our new one?”

Bex H. Kwan ’14, who played music between each speaker as the DJ for the event, chose to use body and movement to convey a message. After getting the audience to their feet, Kwan led the group in a harmonized singing of the line, “We are community together.” With the crowd clapping and singing as one, Kwan jumped around the stage in an energetic mix of stomp and interpretative dance.

Between recitations, representatives from peer counseling groups presented the services offered by their organizations. Some groups said that they would remain open later than usual that night for students inspired by the program to reach out for help.

One student, who said she had never performed a poem in public before, was moved to write a tribute to Cote K. Laramie ’14 during intermission and read it during the second half of the program. Laramie committed suicide earlier this semester at his home in New Hampshire.

Maura D. Church '14, one of the event’s organizers, emphasized the importance of eliminating the stigma associated with mental health problems.

“No one bakes you a pie if you’re depressed or bipolar or just struggling,” said Church. “I think this is the most important conversation for us to have on campus.”

Reddy, who is also a Crimson arts chair, echoed Church’s sentiments and added that strength stems from community.

“It’s hard to find somewhere on campus to talk about mental health,” she said. “You’re not sure when you can break the divide. We should all look around and remember these faces. I know I feel comfortable talking to all of you.”