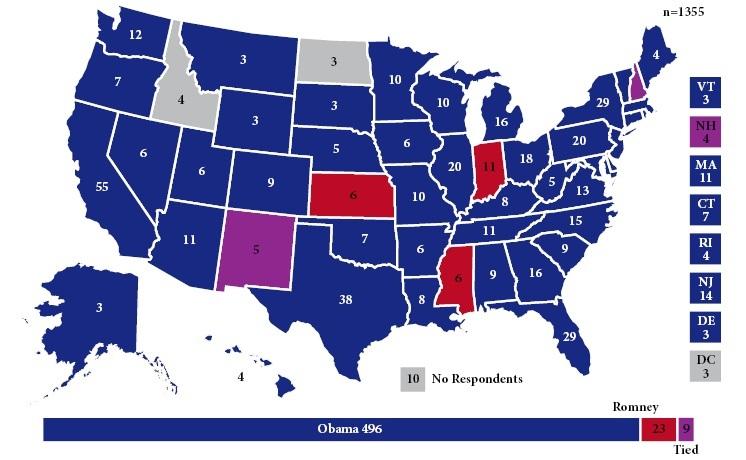 This map depicts how states would vote if Harvard students comprised the entire electorate. Numbers represent each state’s actual number of delegates to the Electoral College for the 2012 election. Obama would win the electoral vote by a margin of 496-32.
By Julia K. Dean, Crimson Staff Writer

More than three-fourths of Harvard students picked Barack Obama for president in a Crimson poll, a landslide result paralleled in real life only by Franklin Delano Roosevelt’s win in the election of 1936.

COLLEGE, NOT THE ELECTORAL KIND

Harvard’s state-by-state map looks quite different than the image that will show up on television on Tuesday night. Students from every state but Idaho and North Dakota participated in the poll, and Obama won in all but five.

Romney took Indiana, Kansas, and Mississippi. And despite the heavy advantage Obama clearly carries among Harvard students, swing states were still swing states. Just like in the recent nationwide polls, New Hampshire and New Mexico proved highly competitive—ties in The Crimson’s poll. The results from Florida and Ohio were also very close, although Obama was favored in each state.

The results suggest that Harvard students are considerably more liberal than the nation at large. For example, 78.5 percent of respondents from Massachusetts favored Obama—more than 20 percent greater than the current poll numbers coming from the state, which show Obama at about 57 percent.

The Crimson poll’s state-by-state results skewed significantly more liberal in some cases; for example, Obama won Texas with 67 percent of the vote, though Texas is a dark red state which Romney will most certainly win.

The issue of second importance in Harvard students’ eyes was health care, also matching up with national averages. These first two were followed by foreign policy at 9 percent and energy and the environment and abortion, both at 7 percent. The general public indicated less concern with all of those issues—3.7 percent, 3.3 percent and 2.2 percent, respectively.

Government professor Ryan D. Enos, who teaches a course on political psychology, said the economy is almost always the top issue in any poll, but that the numbers in The Crimson’s and UGov’s surveys may not line up completely because the two polls did not offer exactly the same set of choices to respondents.

The poll also questioned students about two initiatives on the Massachusetts ballot this year, which would legalize physician-assisted suicide and medical marijuana dispensation.

Students at the College, the Law School and the Graduate School of Design submitted the most responses to the online poll, which was open to students last week. Of those schools, the Graduate School of Design was the most liberal leaning, with 88 percent in favor of Obama. At the Law School, 79 percent supported Obama, and at the College, where more than 10 percent of the student body took the survey, 73 percent favored the President.

While the Law School and the College answered similarly in some respects, Law School students showed significantly greater support for Elizabeth Warren, a professor at the Law School, in her Senate race against Republican incumbent Scott Brown. At the Law School, 81.5 percent said that they would vote for the professor; in the College, Warren received 74 percent of the votes.

Among the concentrations in the College, economics and philosophy students were the most conservative; those concentrators were nearly evenly split between supporting Obama and Romney.

Government professor Arthur P. Spirling, who teaches questions on political science research methods, questioned whether that phenomenon sprung from selection or treatment. Does studying economics or philosophy make a student conservative or do more conservative students choose to study economics and philosophy?

—Staff writer Julia K. Dean can be reached at juliadean@college.harvard.edu.