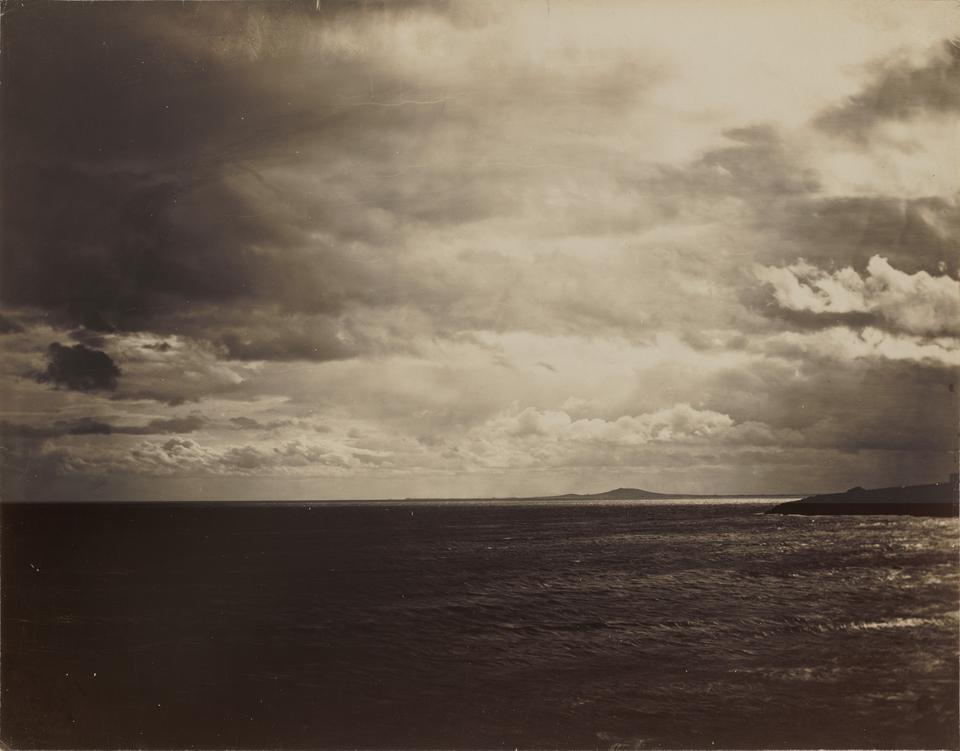 Anne E. Havinga stares entranced at a photo of two British military musicians, a portrait taken upon their return from the Crimean War in 1856. “I love their expression, the Busby hats, and the fact that the two look like they might be brothers. And you really get a sense of how young some of these soldiers were,” she says, her voice trailing off into quiet contemplation. “It’s a gorgeously rich print.”

The piece is part of a new exhibit, “Silver, Salt, and Sunlight: Early Photography in Britain and France,” that Havinga curated at the Museum of Fine Arts (MFA). The exhibition, which runs until August 5, explores subject matter and techniques of photographers in what Havinga considers the art’s “golden age,” from around 1840 to1870.

It is the opening day of the exhibit. Havinga is poised and polished, her hair arranged in a stately silver bob and her classic dark suit set off by a colorful scarf. Putting on her glasses, she starts to walk through the gallery. Visitors wander in, pausing to admire the works and pointing at images across the room. “This is an exhibition that I’ve been working on for a couple of years,” Havinga says. “This material is becoming harder to acquire as these types of photographs are getting rarer and more expensive all the time.”

She stops first at the oldest image in the exhibit, which is not actually a print but a daguerreotype made by French photographer Joseph-Philibert Girault de Prangey in 1842. Daguerreotyping was a laborious process that produced a fragile, beautiful single plate. Its various disadvantages—the cost of the materials, the fact that subjects were visible only from one angle, the difficulty of large-scale reproduction—encouraged photographers to switch to albumen prints, which used paper coated with egg, and salted paper prints.

“Silver, Salt, and Sunlight,” named for this next level of photographic invention, is organized into photos of people, cities, and exotic sites. In the portraiture section, Havinga pauses before a haunting image taken by Gaspard-Félix Tournachon, who also went by Nadar, of a wild-haired man clad loosely in ragged robes. “This photograph is of an eccentric street preacher who was a beloved figure in Paris,” Havinga says. “[Nadar is] clearly looking back to Baroque painting in the way he poses him.”

She moves to another image meant to capture a painterly style: Gustave le Gray’s marine vista, “Cloudy Sky—the Mediterranean with Mount Agde,” which evokes Romantic paintings. Contemporary photographers debate the extent to which they should digitally manipulate their images, but as early as the mid-19th century, photographers like le Gray were retouching their prints. “It was very difficult [for photographers] to get the tonality of both the sky and the earth,” Havinga says. “What le Gray did was take two negatives, and then he combined them. He did it in a very expert way.”

Photography today is almost universally accessible to the willing amateur, but the expense and time it required in its infancy kept photography a pastime of the privileged. “Many of these traveling photographers were well-to-do aristocrats,” Havinga says. She is looking at a photo that one such aristocrat, Gustave de Beaucorps, took of a desert camp in 1858. “I just love the peaked tents here in this oasis spot, and I love that with the long exposure the figures under the tent look like [they are] fluttering, like moths.” These images shaped the public’s conception of foreign lands, previously known to the West only through sketches and stories. “I don’t know if they inspired people to visit, but I think they inspired people to dream about places.” Havinga says. “It was like armchair traveling.”

The photos represent significant investments of labor—in addition to traveling with large glass negatives, photographers carried heavy cameras, bottles of photographic chemicals, and makeshift darkroom tents. Each negative had to be chemically prepared and treated right after exposure. “The passion and fortitude of these early photographers is incredible,” Havinga says as she contemplates a picture by Auguste-Rosalie Bisson of mountaineers scaling the Alps.

One aspect of early photography that appeals to Havinga is that great photographers are still being rediscovered. “Families in France who are selling an old estate will go through the attic and find all these old photographs,” she says. “In my career we’ve discovered many new prints, and it’s been very exciting to be a part of that.”  The museum was able to acquire some images that Havinga previously thought lost or unavailable for purchase, such as a portrait taken by author Lewis Carroll of a young girl named Alexandra. “The market for Lewis Carroll’s work goes beyond the photography market,” Havinga says. “We had thought that we had missed the boat and that there were no more out there.”

This exhibit comprises only a small sample of the MFA’s photography collection; most of it is available for art students to examine. Asked to point out a favorite image in the exhibit, Havinga shrugs and smiles contentedly at the prints surrounding her. “I love them all,” she says.