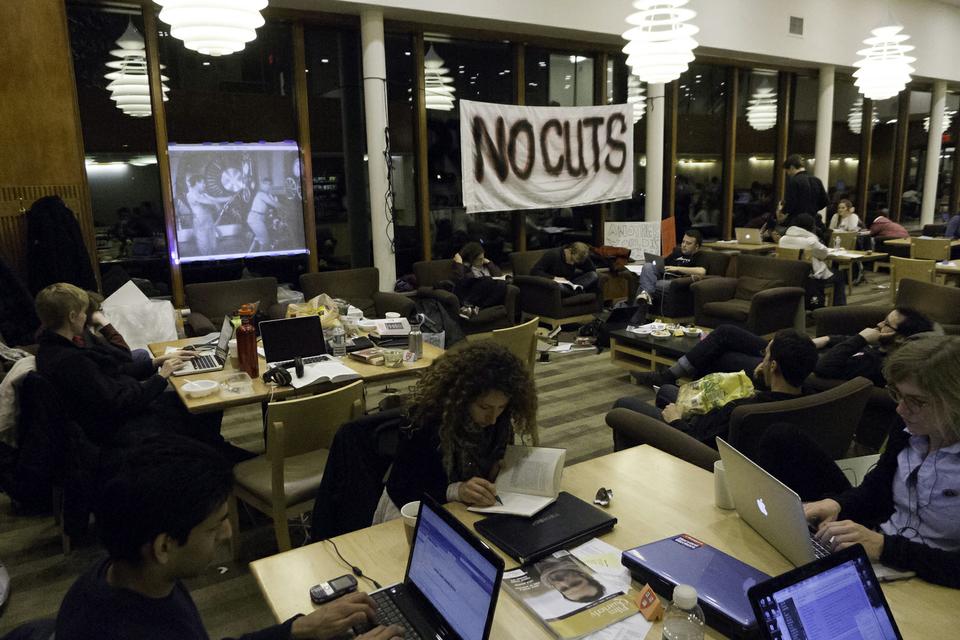 Despite warnings from the University that they could lose their library privileges indefinitely if they continue to sleep in the library overnight, members of the Occupy Harvard movement remained in Lamont Café on Monday to protest announced staff reductions in Harvard libraries.

“The protesters in the café will be expected to respect the restrictions placed on access to Lamont Library, including the rights of others to the quiet use of what is a central study space for our undergraduate students,” Faculty of Arts and Sciences spokesperson Jeff Neal said.

Protestors said that these guidelines are an inappropriate reaction to their activities.

“As undergraduate and graduate students here, losing library privileges is tantamount to expulsion,” a doctoral student in history Andrew J. Pope said. Despite the severity of this threat, Pope said that many protestors would not be deterred from their goal.

In response to the University’s announcement earlier in the day about the Voluntary Early Retirement Incentive Program, an optional early retirement offer for eligible library employees, protestors said the package is “coercive,” “ineffective,” and “manipulative” as workers would not know in advance whether they would be laid off or not.

Many protestors said that this development would not change their decision to remain in Lamont until Friday at 10 p.m.

Pointing to the flyer of rules printed on neon pink paper, doctoral student in history Rudi E. Batzell said, “This is the piece of literature distributed by police to shut down free speech and prevent conversation that the University considers inconvenient from happening.”

At around 11:30 a.m., two Harvard administrators and police officers came to Lamont Café to take down the banner that read “No Layoffs” on one side, “No Cuts” on the other, protestors said.

According to Pope, the administrators said they had violated an “unwritten library policy” about hanging up signs in the library.

“Harvard has a very strict free speech policy that applies to everyone in the community,” Pope said. “The sign was speech, so how could they tell us to take it down? This is infringing on free speech.”

Neal said that the University’s response to the Occupy supporters does not violate Harvard’s free speech policy.

“As we said when protesters pitched tents in Harvard Yard, free speech and the free exchange of ideas are hallmarks of the Harvard experience, and we respect and protect the rights of protesters to express their views,” Neal wrote in an email. “At the same time, the University has a fundamental obligation to attend to the security of its students, faculty and staff and to ensure that studying and other academic activities proceed without disruption on campus.”

A total of four HUPD officers—two at the entrance of Lamont Library and two inside the café—were on guard throughout the night.

Bonarene M. S. Wakam ’12, Lamont Café shift manager, said the security guards and the police have been a far more prominent and noticeable presence in the Library than the protestors.

“The Occupiers haven’t been disruptive at all. They’ve been quiet and peaceful, and if it weren’t for the oversized posters announcing their cause, you could easily mistake them for a large study group,” added Yi J. Chow ’13, Lamont Café senior manager.