Housing Day, Their Own Way 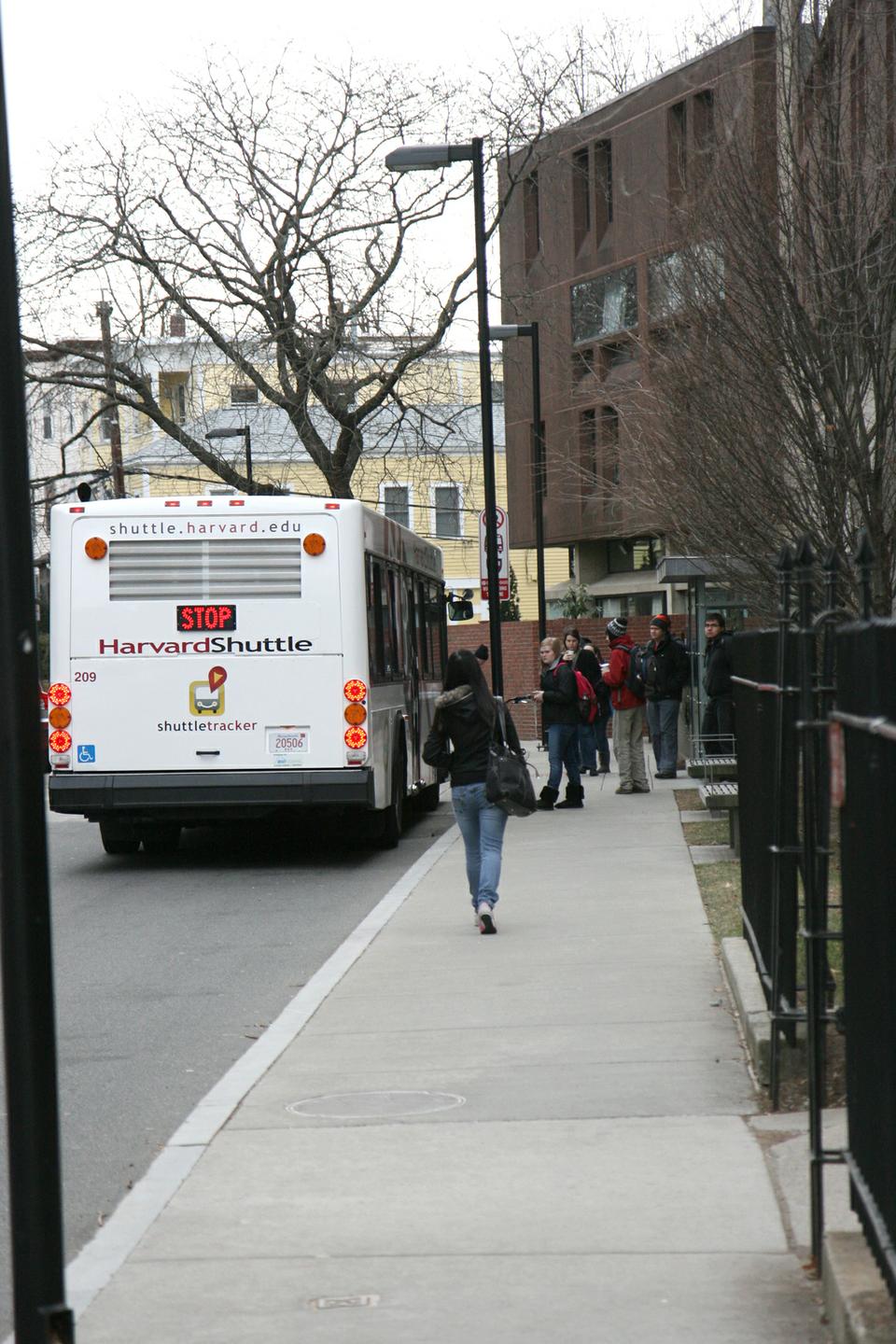 Students wait for the morning shuttle outside Mather House. Distance from the Yard is a factor that influences students’ decisions to transfer houses.
By Jane Seo, Crimson Staff Writer

When the young wizards and witches at Hogwarts are sorted into four different houses, they have the opportunity to tell the magical Sorting Hat which houses they prefer.

At Harvard, the sorting process is not so lenient.

Once the dust settles on the random lottery that distributes Harvard freshmen among twelve Houses—which vary widely in location, architecture, and tradition—some students are inevitably dissatisfied.

Some grow to love the communities they were upset to hear on Housing Day that they would be joining. Others, while less enthusiastic about their Houses, grin and bear it for three years. But after a year or more in their assigned Houses, some want to jump ship.

Upperclassmen have the option of applying to transfer to a different House. The process has strict limitations, and students who choose to transfer often feel torn between a location that suits their lives and a group of friends who reside in their first House. After transferring, though, students almost unanimously say they are happier in the House they chose themselves.

The objective of interhouse transfer, according to Mather House Master Michael D. Rosengarten, is to help students enhance their educational or social experiences.

“The process is all about making students happy,” Rosengarten says.

The application requires students to choose their primary reason for requesting to transfer from choices such as “be closer to Harvard Square” or “desire a different room configuration.”

But the reasons that students give have little bearing on the outcome of their petitions to transfer. The first round of the interhouse transfer process, which is conducted in February, is entirely random in order to align with the philosophy of the freshman lottery, says Sophia R. Chaknis, director of residential programs and operations in the Office of Student Life.

Though freshmen can enter the housing lottery with a blocking group of up to seven friends, a House transfer applicant can switch with only one other person.

Of the nicknames Emily S. Unger ’13 has accumulated over the years, the one that makes her chuckle every time is “Traitor.”

“People from my old House tease me by saying, ‘Oh, you are a traitor,’” Unger says. “Joking aside, I don’t think they actually judge me for transferring to a different House.”

Unger, a former Currierite, transferred to Quincy after her sophomore year, since, as she says, “the Quad was very far from everything.”

Unger says she spends most of her time at Hillel, sandwiched between Lowell and Quincy.

“Being close to Hillel was my priority,” she says.

Like Unger, Rachel E. Zax ’12 is active in the Hillel community and decided to transfer from Pforzheimer to a River House because she found the commute to be a hassle. An observant Jew, Zax does not ride the shuttle on the Sabbath. She says she worried about her safety walking home at nights and on winter days.

Of the six River Houses she listed as options on her transfer application, Zax says she was placed in the one she named as her top choice, Adams.

“I was really hoping to get Adams because it has the best location,” she says.

Some students do move in the other direction, though, from the River to the Quad.

Andrea R. Rivera ’13 says she gets a lot of curious looks when she tells acquaintances that she transferred from Mather to Currier.

“I just wanted to live with a different group of friends,” she says.

Although Rivera initially wanted to transfer to Quincy with a friend in Currier, she says her friend “loved Currier too much and didn’t want to leave.”

Rivera admits that she initially felt scared thinking about living in the far-away Quad.

“But it was worth it, thinking that my room would be bigger and I would be living with people I really enjoy seeing,” she says.

A HOUSE IS NOT A HOME

Some students look to transfer Houses because they do not feel comfortable, either physically or socially, in the first Houses they land in.

One student, who wished to remain anonymous to avoid offending residents of his first House, transferred to a House within the same River neighborhood because, he says, “my rooming sucked.”

He recalls, “The room was overheated, so I could barely sleep at night.”

He says he also disliked the House’s architecture and the food in its dining hall.

Though he misses his blockmates, he says, transferring to a different House has improved his Harvard experience.

Elaine D. Kim ’13 says she and her blockmates were apathetic when they were greeted by bunnies on Housing Day.

“Leverett is neither the best nor the worst House,” she says.

After living there for a year, Kim says she did not feel like a part of the House community. She decided to transfer. In ranking her choices, Kim says she considered factors including location, community, and rooms.

Shortly after, she received an email welcoming her to Kirkland. “The rooms in Kirkland are small, but it has a great community,” Kim says. “Leverett just wasn’t for me, and I am having a better experience in Kirkland.”

Each House sets a cap each year on the number of transfer students it accepts based on the space available in the House, according to Adams House Master John G. “Sean” Palfrey ’67.

“It is a two-way street with many unpredictable variables. Depending on how many new students Harvard sends us, how many transfers out [of the House] there are or leaves taken—spaces pop up for student transfers,” Palfrey says.

Alexa I. Stern ’12 and Joshua R. Wortzel ’13 were not so lucky on their first attempts to transfer Houses.

Wortzel’s blockmates were all women, and after a year in a single in Pforzheimer, he wanted to move to Lowell to room with a friend there.

When his first-round application was rejected, he talked to the resident dean of Lowell, who recommended that he apply again in the second round.

Likewise, Stern was the only woman in her blocking group. She submitted a transfer application from Currier to Leverett as a sophomore so she could live with a group of women in Leverett. When she found out her application had been rejected, she says she was “devastated.”

“I never thought about what I would do if I didn’t get out of Currier,” she says.

But she had a second chance. She describes the process, “The first round is pure lottery, whereas the second round takes into account special consideration, such as whether you are fit for the house.”

Before the freshman lottery was randomized in the mid-1990s, students who wanted to transfer Houses had to “directly petition the Master of the House into which they hope to move,” according to a Crimson article from 1984.Today, neither the resident dean nor the House masters have any say in interhouse transfer decisions.

“We don’t make the decision based on whether we like you or not, but whether we have the space availability for transfer,” Palfrey says.

Nonetheless, Stern says she approached the Leverett resident dean to tell her that she was eating in Leverett at least once a day, sneaking into community dinner, and staying over in a friend’s room in Leverett on some weekends.

Stern’s determination paid off. Near the end of her sophomore summer, Stern received an email from the Office of Student Life saying she would be living in Leverett the following year.

“Now that I am in a House that I like, it just made my Harvard experience so much better,” Stern says.

Wortzel also heard the good news over the summer that his application to Lowell had been accepted.

“Having a roommate for me was the best thing, because being in a single can be lonely,” Wortzel says. “There is nothing I don’t like about Lowell.”

The College restricts transfers in part because free transfer among Houses might disrupt the communal atmosphere of a House.

“We try very hard, as House Masters, to develop community, and it becomes much more difficult if the tides flow too strongly in and out,” Palfrey says. “You don’t want people to be hopping Houses.”

Students also feel that the tug of personal ties constrains their decisions to move to new Houses.

Before she decided to transfer, Zax questioned whether the convenience and safety were worth being separated from her blockmates.

Living in a single in Adams, she says she would much rather live with her original blockmates.

“I do miss coming home and having conversations with my roommates,” Zax says. “Now I come home and sit in the room by myself.”

Unger also says it was difficult leaving her blockmates.

“It puts you in a weird situation at Harvard, because you are outside of the Harvard social fabric, the...blocking group,” she says.

Nevertheless, Unger says, “I am definitely happier now that I have transferred. I am very happy here.”