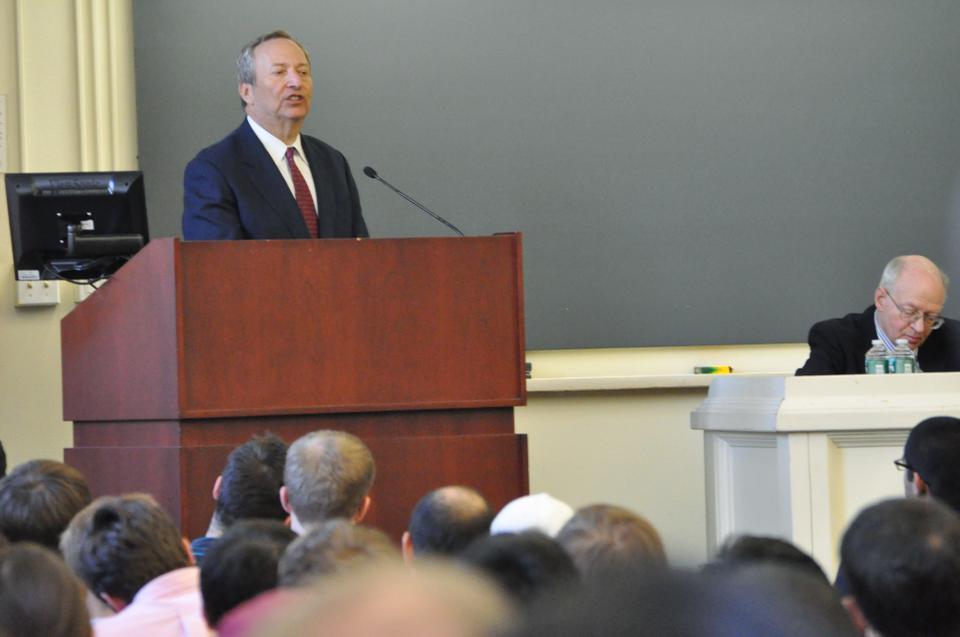 Former United States Secretary of the Treasury and former Director of the White House United States National Economic Council, Professor Larry Summers, speaks about the effectiveness of fiscal policy as a tool for economic stimulus in front of a packed auditorium as moderator Professor Marty Feldstein, former chairman of the Council of Economic Advisers and former chief economic adviser to President Ronald Reagan, in front of a packed auditorium in Emerson Hall on Tuesday, February 28.
By AMANDA E. MCGOWAN, Contributing Writer

Former Harvard president Lawrence H. Summers, one of the architects of the Obama administration’s fiscal policies, defended the effectiveness of the president’s response to the financial crisis in a debate with former Bush administration official John B. Taylor.

Taylor said that stimulus measures “may very well be harmful for causing uncertainty, unpredictability, and concerns about future taxes that come from increased deficit.”

But Summers, who served as director of the National Economic Council before returning to Harvard to teach, pointed out a direct correlation between stimulus measures and upticks in the economy, adding that both conservative and liberal economists widely agree that the stimulus was effective.

“Use your common sense,” Summers said. “Do you really believe if we had done nothing in response to the crisis in 2008, it would have been a good idea?”

In contrast, Taylor—a Stanford economics professor who previously served as Under Secretary of the Treasury for International Affairs—criticized stimulus initiatives as short-term fixes.

“They wither and they don’t give you a lasting recovery,” he said, adding, “It goes away and we are even weaker than before.”

Instead, he advocated long-term solutions like permanent tax credits and government programs designed to encourage efficiency.

“The sooner we get off this track and go back to what we were doing in the ’80s and ’90s, the better our economy will be,” Taylor said.

Summers disagreed, maintaining that the economy is better off in the long run thanks to the government’s stimulus efforts.

“When something goes off the edge,” Summers continued, “I think it’s a good idea to catch it.”

Audience members at the debate in Emerson Hall on Tuesday crowded the aisles and stairs, even spilling out into the hallway.

In response to the event, visiting student Nga Pingwong said she the two economists seemed to be talking past each other without providing suggestions for future policies.

“I think they aren’t really touching the point,” she said. “Both of them agree there is an influence, but they don’t go deep enough to say what would help.”