Coaches Monitor Athletes Online in the Age of Twitter 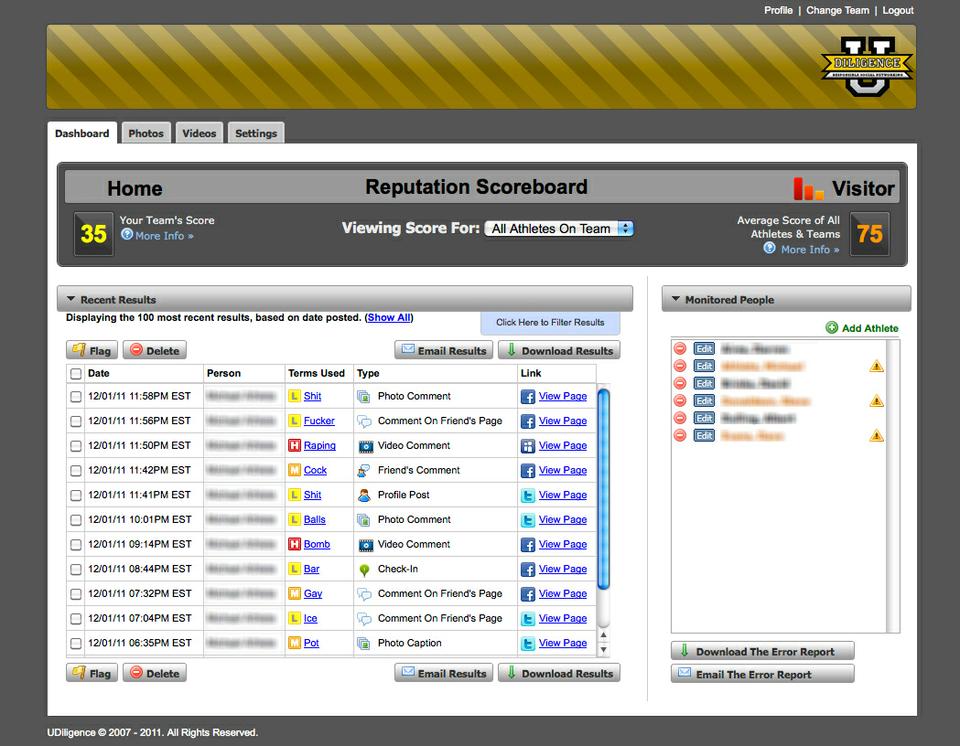 Coaches from the University of Texas at Austin and University of Florida hav esigned up for UDiligence, a service that monitors Facebook and Twitter posts made by college athletes.
By Jacob D. H. Feldman, Crimson Staff Writer

On its path to the nation’s Top 25 this season, the Harvard men’s basketball team has increasingly acted like a big-time program. Take away the intellectual brand and the lack of historical success, and the top-flight players now wearing crimson in packed arenas make the program seem more like a member of the Big East than the Ivy League.

As Harvard’s program emerges on the national stage and receives more media scrutiny, head coach Tommy Amaker has assigned his assistant coaches to monitor what players on the team are saying on their personal Twitter accounts.

Harvard women’s soccer coach Ray Leone requires his team to go without Facebook during Ivy League play, though Leone says that a desire for his athletes to focus, not a worry about negative publicity, spurred his decision.

But Assistant Athletic Director Kurt K. Svoboda says he does not approve of policies like Amaker’s. “I don’t believe in monitoring what our student athletes are saying,” he says.

It seems most other Harvard teams have followed Svoboda’s preferred model. A number of coaches have taken to educating their teams about the risks of imprudently tweeting and posting on Facebook, but none of the other 10 coaches interviewed for the story said they have any policies in place for monitoring players’ online activity.

At Harvard, then, Amaker’s rule might seem strict. Yet compared to the regulations at other universities, Amaker’s monitoring policy is less formal than many.

During the last two seasons, several basketball programs, from St. John’s to Missouri, have banned Twitter use by their players, a method of control that dates back to the early days of Facebook in 2006.

In March of that year, Northwestern University suspended its women’s soccer team after photos of alleged hazing appeared on Facebook.

While Northwestern’s administration stated that it could not bar students from using Facebook because of free speech and privacy laws, other schools did just that to protect their brands.

Back in 2006, rights advocates protested, and several schools called off their initial bans.

But then came Twitter, and with it, a rebirth of the debate. After dealing with Facebook for years, Harvard was more equipped to handle a burgeoning social network this time around, Svoboda said. But some people felt that Twitter required a more watchful eye than earlier online outlets.

Last June, the NCAA criticized University of North Carolina officials for inadequately monitoring athletes’ activity on social networks. That ruling had potent implications for all college athletic departments, putting schools in the same conundrum they found themselves in five years ago. Across the country, athletic departments have been forced to decide between potentially being cited for “failure to monitor” and upsetting rights groups for monitoring or banning social media use by their players.

Many schools have decided to regularly monitor their athletes’ social media use—and several private companies have popped up to help those schools at the task.

Kevin Long is the CEO and creator of UDiligence, a service that monitors Facebook and Twitter posts made by college athletes.

After a sports team or an entire athletic department signs up for Long’s service, athletes are instructed to install an app on Facebook and Twitter. A computer program then filters through the players’ past and current posts and tweets, searching for over 400 keywords such as “stripper” and “shotgun.” When even a photo caption or comment contains one of the keywords, it is added to a list of alerts that is sent daily to the athlete and periodically to the athletic department.

These days, business is booming for UDiligence.

“As more and more incidents [occur] where athlete posts things that end up in the media, it certainly has increased the interest in making sure athletes are responsible about what they are posting,” Long said.

According to Long, UDiligence has seen a significant increase in the number of inquiries since the NCAA’s decision to rebuke UNC.

Rights advocates have raised concerns that monitoring services such as UDiligence may chill students’ speech. Moreover, some have raised doubts about the effectiveness of such services. Once something has already been posted on a social network, it is impossible to completely retract, as somebody else may already have taken a picture or saved a copy of the offensive text or photo.

According to Bradley Shear, an attorney who writes a blog about social media law, lawyers have at times dissuaded universities from signing up for such services due to liability issues. If a student were to write a post online about committing a crime, the school could be blamed for negligence if it failed to take action after seeing that information via social media monitoring.

Nevertheless, UDiligence and other products like it are increasingly popular.

BACK TO THE FUTURE

In keeping with the rest of the Ivy League, the Harvard athletic department at present does not rely on the aid of one of these services or enforce any across-the-board rules regarding athletes’ social media use.

The absence of departmental policies puts the onus on coaches to determine protocol for their teams.

Harvard football coach Tim Murphy has chosen to educate rather than monitor. Instead of policing the online action of his 100-plus players, a daunting logistical feat, he reminds his players that they represent more than themselves, and he turns to examples of social media use that have hurt other programs to drill his point home.

He said that he is no fan of social media use. “From my standpoint, the less you put out on social networks, the better,” he said in an interview with The Crimson during the football season.

For Amaker, preemptive education is not enough. He sends his players to a workshop on social media led by the athletic department at the beginning of every year, but he said that he has also enlisted his assistant coaches to make sure that what the players say represents the school and team well.

Co-captain Keith Wright said he was in favor of the team’s current practices, especially in contrast to the more restrictive policies in place for the teams that some of his friends play for. He said he would also support an outright ban on social media if the coach felt it were appropriate.

Junior point guard Brandyn Curry said that Amaker has expressed a desire to let basketball players keep their Twitter accounts active as long as he does not have a reason to act otherwise.

Amaker’s adversary at Yale has a similar monitoring policy. Starting this year, Bulldog basketball coach James Jones has begun visiting the online pages of his athletes to monitor what they are saying.

“We’ve become a cyber society, and more and more, everything is getting online, so we monitor and make sure guys are following the line,” Jones said.

Jones’ new policy debuted six months after Yale star Greg Mangano turned to Twitter to voice his displeasure about losing out on the Ivy League Player of the Year Award to the Crimson’s Keith Wright.

Princeton Associate Director of Athletics Jerry Price said that proper education and reinforcement should be sufficient to forestall problems. He said that Ivy League teams have players who understand the ramifications of what they say.

But as Amaker, Jones, and coaches at higher-profile programs push the boundaries, Svoboda acknowledged that the common Ivy League laxity about online monitoring may not last.

“We have constant discussions. Social media networking is here. It’s current. It’s something that’s always on the forefront of our minds,” Svoboda said. “Schools have to maintain constant discussion on these fronts to make sure they are evolving with how people consume information.”