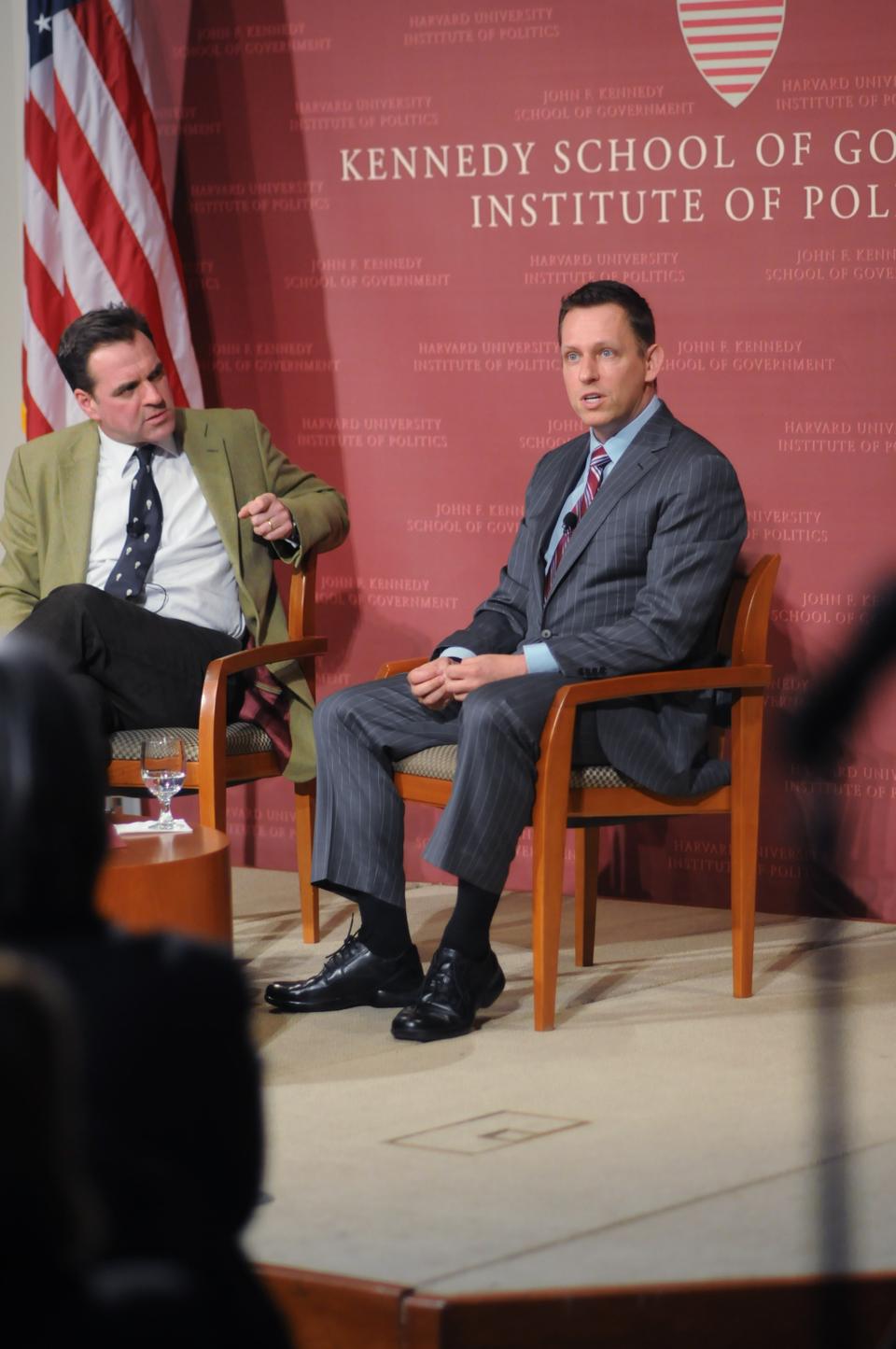 Peter Thiel speaks at the IOP Monday night. The Q&A let Thiel speak about a variety of things including his thoughts on the "higher education bubble."
By Ethan G. Loewi, Crimson Staff Writer

Peter A. Thiel, founding CEO of PayPal and Facebook board member, discussed education, innovation, and the role of government in solving major societal problems at the Institute of Politics on Monday night.

History professor Niall C. D. Ferguson moderated the discussion, which focused on the relationship between technology and economic growth in the U.S.

Thiel addressed the uncertain future of technological development, an issue that he explored in a 2011 article entitled “The End of the Future,” published in the National Review Online.

Thiel argued that innovation in fields such as agriculture and transportation has become dangerously slow, leading to economic stagnation around the world.

“I think that we’ve seen progress in the virtual world, but not in the world of stuff,” Thiel said. “The U.S. has produced a ton of innovation in computers and finance over the past 30 years, but we have to ask if that implicitly twisted innovation in other areas.”

Thiel attributed this lack of innovation to structural defects in politics and education today.

When the conversation shifted to the 2012 election, Thiel had harsh words for politicians on both sides of the aisle.

“I think we are headed towards a period of chaotic austerity, because people in our political system are not able to discuss our true problems openly,” Thiel said.

He added, “Our government is not organized to find democratic solutions to problems, because our politicians are more focused on procedural issues than substantive ones.”

Thiel said that he believes the greatest hope for future technological and economic growth lies in free enterprise, and in particular, the innovation of young people.

Thiel said that he believes that young people need new creative avenues, citing his Thiel Fellowship, also known as the “20 Under 20,” which gives $100,000 to students 19 or younger to drop out of college and pursue creative expeditions in science, investment, and entrepreneurship.

Thiel—who is a self-identified libertarian—said he is skeptical of welfare programs, which he believes may hinder innovation and healthy economic growth.

“A lot of the New Deal economic theories were not quite correct. But in the 30s—a world of incredible economic advancement—there was a powerful tailwind of support,” Thiel said, later adding that “welfare states lead to horizontal movement.”

Thiel was unable to discuss Facebook’s recent initial public offering because of his involvement in the company.

“He has some controversial ideas, but I think they can be very helpful,” said Ha H. Le ’14, who attended the event. “You don’t see a lot of people offering grants for students to drop out.”

—Staff writer Ethan G. Loewi can be reached at ethanloewi@college.harvard.edu.