The Sun Sets on the Traditional Library

Harvard navigates the transition to a more centralized library system for the 21st century. 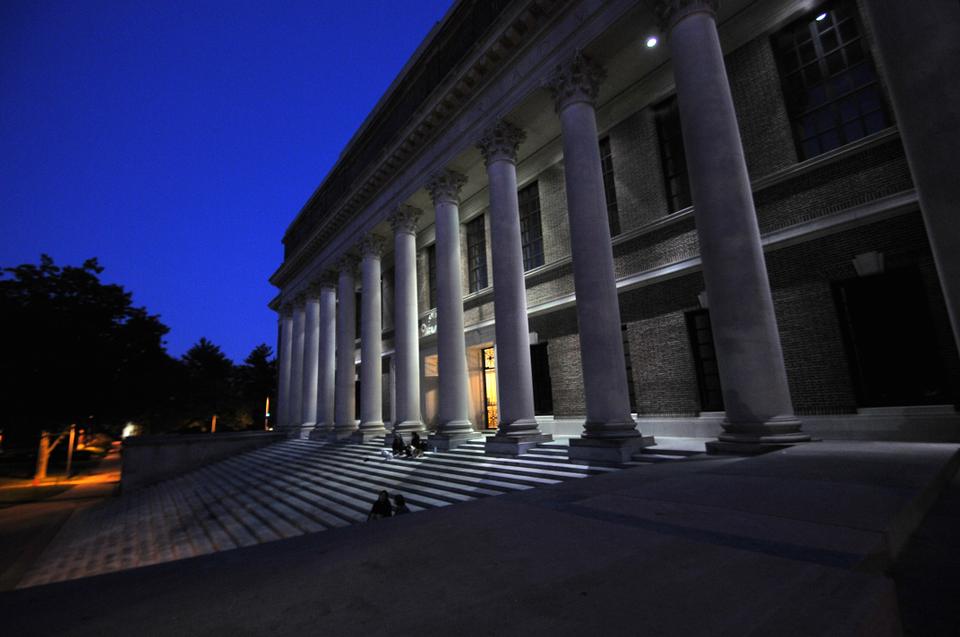 It’s been a tough year for the Harvard University Library.

An announcement of planned staff reductions prompted consternation and confusion among library workers. Faculty expressed doubts over the administration’s vision for a 21st-century library. And a number of communications missteps on the part of the University fueled growing tensions with the community at large.

The administration has acknowledged these widespread concerns and has met anger and protest on the part of library workers with greater communication and interaction. But for the most part, these efforts have failed to quell concern. At the heart of the problem, community members—faculty and library employees alike—are unsure what the library’s rhetoric actually means.

“There’s some confusion among our members about where exactly this is headed or what the goals actually are,” said Bill Jaeger, director of the Harvard Union of Clerical and Technical Workers, which represents many of Harvard’s library workers.

Harvard library administrators and countless experts around the country agree that modern university libraries must adapt to increasingly digital, interconnected, and complicated forms of knowledge to avoid irrelevance. Harvard University Library administrators have picked up on that theme, trying to generate excitement for change with talk of sweeping reforms to centralize and digitize the library.

Since talks of large-scale change for the libraries first began in 2009, the University has maintained a consistent message on the impetus behind the library reorganization: In a rapidly changing environment, the Library is in danger of falling behind.

Now is the time for the libraries to look inward to resolve structural weaknesses and inefficiencies, administrators have said.

In March 2009, Steven E. Hyman, who served as University provost at the time, created the Library Task Force, which he charged with charting the future of the libraries at Harvard. It was this task force that proposed that the University merge Harvard’s 73 disparate libraries into one coherent system in a report that characterized the old model as “fragmented and outmoded.”

“We will come out of this process with an organization that is more responsive to the needs of the research and teaching communities across Harvard,” Hyman said in a statement at the time. “The panel will set priorities to tailor the system for the rapidly changing digital information landscape and propose reforms aimed at supporting collecting, preservation, and other core activities.”

Experts agreed that the libraries must modernize in order to stay relevant.

“It’s not just change—it’s transformation,” said Rachel L. Frick, director of the Digital Library Federation. And for those that are left behind, “I have not been shy to say that there will be places that will still have a library building, but they won’t have a functioning, engaged library.”

Above all, the Task Force report and subsequent statements by Harvard administrators have emphasized centralization in order to increase efficiency.

This focus on consolidation to foster an improvement in services has been a goal at academic libraries across the country, according to Paula T. Kaufman, university librarian and dean of libraries at the University of Illinois at Urbana-Champaign.

Illinois—whose library boasts the second-largest collection among American universities, behind only Harvard’s—has undergone many tune-ups in the past half-decade. As the library system at Illinois grew over the course of the 20th century, the network began to include many departmental libraries.

Much like at Illinois, Harvard’s reorganization seeks to consolidate the University’s currently separate 73 libraries. The Task Force report recommended the creation of shared administrative services, advice that library leadership followed.

Last year, Garber announced the creation of five affinity groups around which the new, unified Harvard University Library would be organized. In a statement at the time, he said that the system would group individual libraries based on collection needs, content, and special activities. Each library would report not only to the centralized library administration but also to the leadership of its group.

“It gives Harvard the opportunity to act cohesively while also preserving the distinct contribution of the schools,” Harvard Library Executive Director Helen Shenton said in an emailed statement. “This will enable Harvard to set an even higher standard for service, leverage buying power, and pursue opportunities that benefit faculty and students University-wide.”

The drive for efficiency led the library to decide to streamline its workforce. On Jan. 19, Shenton provoked confusion and skepticism among library workers when she announced that “the library workforce will be smaller than it is now,” through either voluntary or involuntary staff reductions. Some workers and student activists protested.

Despite the University’s claim that staff reductions are necessary for modernization, observers at Harvard say that the connection between a smaller staff and a modernized library is not immediately evident.

“I don’t see how they’re going to build a new library system with a demoralized staff,” Asani said. “They’ve confused the chain of command.”

Outside experts tend to say more often that updating the staff naturally comes along with updating the library.

Thomas C. Leonard, university librarian at the University of California, Berkeley, said he is thankful that Berkeley has been able to avoid layoffs.

“In any institution, there are people who have been around for a long time and who are wonderful,” he said. “However, it’s in taking on new people with new skills that we probably have the most to gain from.”

Leaders and members of HUCTW, which represents many of the workers in Harvard libraries, expressed concern that staff cuts would be counterproductive to the efforts to improve the library. Reductions would result in negative effects on the quality of cataloging and other services, the union argued in an open letter to the Harvard community released in March.

“There is only one effective approach to such a major reorganizational effort: the process needs to be transparent and participatory,” HUCTW leaders wrote. “If the cautionary cries of library staff about severe understanding and quality concerns are not heard and heeded, the Harvard Library Transition will not be successful.”

In an emailed statement to The Crimson, Senior Associate Provost for the Harvard Library Mary Lee Kennedy said that the library has and will continue to meet with library workers, faculty members, and administrators to talk about the library’s services and needs. University Librarian Robert C. Darnton ’60 declined to comment for this article.

The library reform, of course, is not just about cuts. Whereas many of the old features of the library will be consolidated, Harvard plans to expand its digitalization efforts as it strives to establish a new information collection system for a 21st-century library.

“Any smart library really needs to think about this carefully,” said Brett Bobley, who serves as director of the Office of Digital Humanities at the National Endowment for the Humanities. “What we’re seeing is the way the library customers consume information is dramatically changing. Some people think of a library as a place to get books. I think of it as a place to get information.”

In 2011, Harvard joined the HathiTrust, an organization of more than 60 library partners that manages a virtual collection of 10.3 million digitized volumes and spurs institutions to share digital information.

And for the last year and a half, Harvard has been a central leader in the Digital Public Library of America, an initiative to make a massive online library that will strive to host every book ever printed.

But some professors said that they still have a preference for printed materials. “It’s not information for me—it’s books,” said English professor Joseph C. Harris. “Digital stuff just disappears, whereas print is just there.”

He said derisively that digital materials would be central to the libraries of the rapidly approaching future. “The 21st-century library is something like a cafe where you bring your laptop,” he said.

Jaeger said that some proposed technological innovations, such as automated checkout, were not cutting-edge or particularly exciting for workers. And many workers and other community members have been wary of technological change that is either too quick or too dramatic.

“I don’t think the community wants to see a massive shift in investment to digitized holdings if the only way that could be accomplished is laying waste to the bricks-and-mortar part of the operation,” Jaeger said.

As the volume of scholarly materials in the world forever increases, universities have found that space and resources limit their ability to offer their patrons access to the resources they expect. As a result, many academic libraries are pursuing collaborative efforts like the HathiTrust.

In recognition of this trend, the 21st-century library should facilitate increased collaboration, Leonard said.

“I think we’re going to go from a model from which a local collection of paper materials was a leading indicator of a great library, to where the libraries that collaborate and leverage the best will be seen as the best libraries,” Leonard said. “Now, we have to think of those buildings as nodes in a network. Information flows from one node to another.”

Shared collections in both digital and bound form increase library interdependence and effectiveness, said Joyce L. Ogburn, the president of the Association for College and Research Libraries.

In addition to its efforts in the HathiTrust and the Digital Public Library of America initiative to share digital holdings, Harvard also joined a program last year to facilitate sharing of its physical resources. Harvard was a latecomer to Borrow Direct, a partnership formed among the other Ivy League institutions nearly a decade before to share books across the universities.

Within the library itself, Ogburn said that a more modern library would reserve more space for computers and student collaboration. Books, she said, could be retrieved by a robot.

Harvard University Library administrators have generally stated goals in line with what outside experts consider important for a competitive university library. But critics charge that library leaders cannot fully articulate their own idea of what the library of the future should look like.

“They just don’t have a clear vision,” Asani said.

Asani and several of his colleagues have said that they fear that the library, long renowned as one of Harvard’s strongest features, will be weakened by this lack of vision. And library workers share the same concern.

“There’s some confusion among our members about where exactly this is headed [and] what the goals actually are,” Jaeger said. He added that workers still hope that the library reforms will in fact lead to an improved and more efficient Harvard library system.

Garber acknowledged that the University’s efforts to create a 21st-century library combine both “catch-up” measures and cutting-edge innovations.

But the difficulties communicating may be due in large part to the precarious state of library transformations across the country. With the rapid pace of change, experts say that it has become difficult to chart a definite course and stick with it.

“I think the age of having a 30-year, 15-year plan, that age is over. Even five is pushing it,” said Frick. “When you think about the constant development process, you’re constantly retooling and developing.”