Mumford & Sons Build a Tower of Cliche and Insincerity 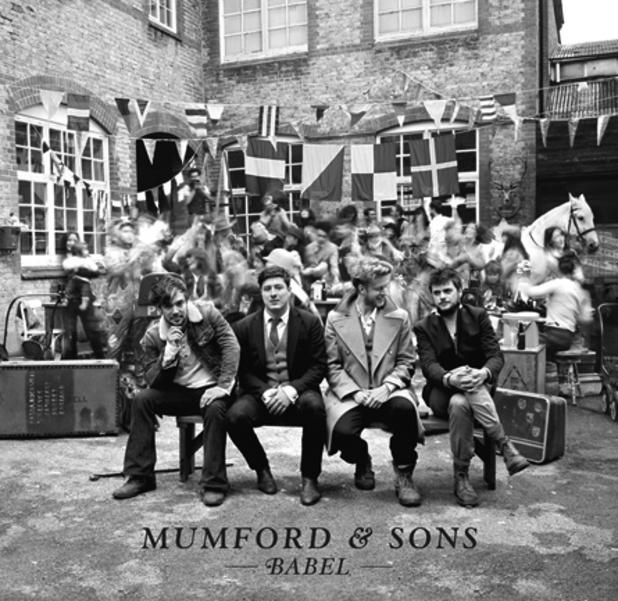 It’s hard to imagine that Mumford & Sons have experienced as many existential crises in the past couple years as claims their new album, “Babel.” From all reports, it seems they’re pretty overjoyed with their new lives as international rock stars. Yet on every song, Mumford & Sons are down on their knees hoping for redemption and seemingly salvaged by each and every banjo climax. It’s suspicious.

Mumford & Sons are very good at what they do; that’s part of the problem. Songs like the lead single “I Will Wait” easily demonstrate why they’re one of the most popular bands around today. The lyrics are built of big, amorphous statements about a big, amorphous relationship, and are vague enough so that eager listeners can project their own stories onto them. The instrumental is driven by a foot-stomping bass drum, a gleeful banjo, and a pulsing acoustic guitar. And Marcus Mumford roars an incredibly catchy melody over it all. It’s a strong formula, but ultimately it is nothing more than a formula, and a slightly sinister one at that. It crafts the illusion of genuine emotion and personal catharsis out of recycled signifiers of the soul with lyrics like ”So I’ll be bold / As well as strong / And use my head alongside my heart.” For a band with such a gift for big-hearted melodies, this lyrical emptiness is a sin.

Mumford & Sons has a name that could just as easily be a clothing store. Fittingly, their music is tailored to the past few years’ vogue for sexless indie folk rock. They’re like the Old Navy version of last fall’s best style, a safe choice for people who like pop music but want something a little different, and they comfortably serve up the big themes of love, faith, and doubt in healthy helpings of inanity. They’re ideologically and aesthetically committed to old things: identical banjo climaxes characterize nearly every song and are frequently heralded by bluegrass-for-the-masses harmonies. Songs like “Babel” are meant to sound like barn-burners from the good old days well before albums leaked on the Internet. And every song is based on the same lyrical and instrumental patterns such that it becomes nearly impossible to differentiate the songs. But there’s a significant difference between the music Mumford & Sons is trying to sound like and the music they produce.

Although the biblical Tower of Babel was driven by collaboration through universal language, “Babel” is ironically plagued by a bare minimum of concern for the words that drive its morals and values. Mumford knows all the lyrical tricks that signify earnestness and traditional folk values, and this is most evident in his nearly constant use of two tropes. He is always talking about his lover’s eyes, and he is on his knees or has fallen to the ground on almost every song on the album. “Not Without Haste,” for instance, is all about how his lover’s eyes “tie [him] down so hard,” but that she still took him up even when he was “on [his] knees” and broke. These lyrics suggest genuine emotion, but Mumford’s easy substitution of generic lines like “we will be who we are…sadness will be far away” for harder hitting, personal material is a sham.

This shortcoming is clearest on the penultimate track of the album. To their credit, it is pretty courageous to record and release a cover of Simon & Garfunkel’s classic,“The Boxer.” In the context of Mumford & Sons’ ambition, though, it reads less like a tribute, and a bit more like “Now, I’m not saying we’re our generation’s Simon & Garfunkel, but we do also have an ampersand in our name….” What’s most frightening about this song is that they took an old song and made it sound older. Gone are the big horns, didgeridoo harmonicas, and epic drum hits of the Simon & Garfunkel version. In their place are simple harmonies, pretty piano lines, banjo, and a dobro. This isn’t a step forward or even an homage: it’s a step backwards into an ideal that’s only ever existed in commercials for Levi’s.

This is an album of pretty music, and it can be fun music, too. But considering that the band members so clearly have the ears for huge, catchy melodies—and so many people listening—such a fearful retreat from more considered, varied songwriting is a sorely missed opportunity.