Harvard Offers $28 Million in Community Benefits for Allston, Along with 'Transformative Project' 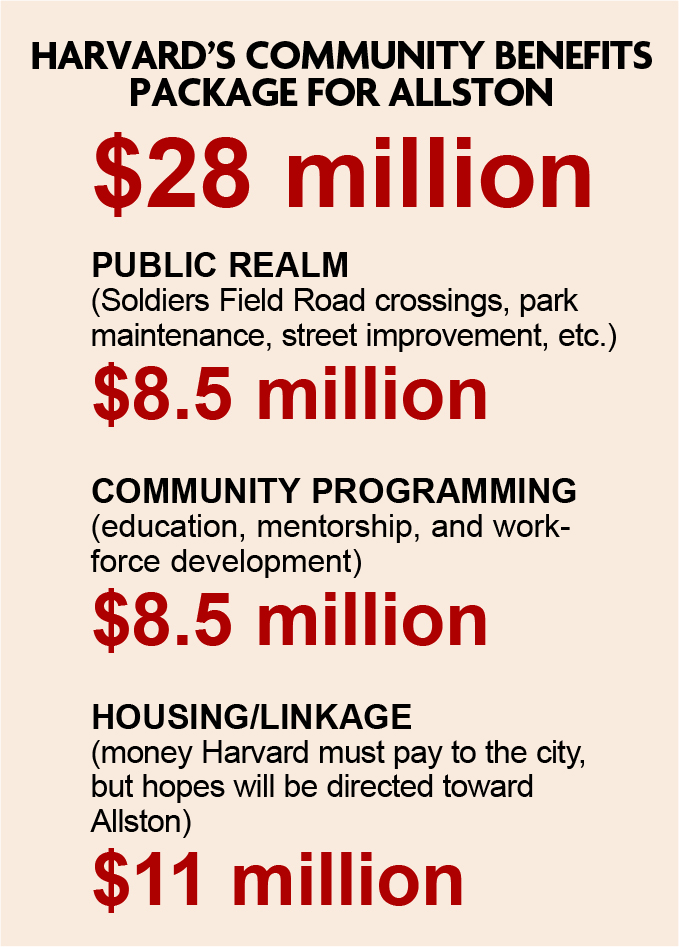 Harvard has planned an additional “transformative suite of projects” for Allston valued at $10 million, in addition to the $28 million community benefit package. There will also be a $2 million public realm flexible fund.
By Samuel Y. Weinstock, Crimson Staff Writer

A presentation of a $28 million community benefit package and an additional $10 million for a teaching and learning hub in Allston was bookended by arguments over how community members should address the University’s 10-year plan for Allston at a Harvard-Allston Task Force meeting Wednesday night.

The meeting started and ended with the Task Force’s comments on Harvard’s Institutional Master Plan, which charts a road map for the University’s developments in Allston over the next 10 years and includes nine projects, including a new hotel and conference center, basketball arena, and science center. Harvard intends to take that document to the Boston Redevelopment Authority for approval on Oct. 17.

At the meeting, Harvard’s Associate Vice President for Public Affairs and Communications Kevin Casey announced a community benefits package of $28 million, along with a “transformative suite of projects” that the University values at $10 million, which will be located at 224 Western Ave.

Casey said that a previous plan to move the Allston Education Portal to that location will go forward, but that it would be accompanied by an array of programming including job services and mentoring, performance space and arts mentoring, after-school programs, partnerships with local schools, health and wellness services, and connections with Harvard faculty, students, and staff.

“We believe that this can become a very new hub for teaching, learning, and enrichment,” Casey said, adding that while he did not think that the proposal included every idea put forth by the task force, it likely incorporated at least 80 percent of them.

The teaching and learning center will also incorporate a new program called AllstonX, a physical manifestation of HarvardX—Harvard’s branch of the online learning venture edX that was launched with MIT last year. Casey called the program a “21st century learning lab” that would target anyone from 12 years old to elderly and include digital literacy training, visits and assistance from professors, and teaching assistants to supplement online courses.

Harvard has also promised to create community benefits outside of its “transformative suite of projects,” including street and park maintenance and improvement, crossings of Soldiers Field Road, community outreach and programming, and extensions of the Allston Partnership Grant and Harvard-Allston Workforce Collaborative through 2024.

Casey also announced a $2 million public realm flexible fund that could be used for ideas that form later in Harvard’s development process.

“We know that there are always going to be other ideas that are not on our list, or maybe any individual person’s list,” Casey said.

The $28 million figure that Harvard referenced for its community benefits package includes $11 million that Harvard would have to pay to the city of Boston in order to develop, but Casey said the University hopes to direct that back into the community.

Casey’s presentation during the meeting laid out new information related to Harvard’s plans for Allston development. The vast majority of the two and a half hour meeting was spent discussing the Task Force’s revisions to a comment letter that the Task Force will send to the BRA before that body considers whether to approve Harvard’s IMP.

An earlier version of the headline accompanying this article incorrectly stated that the Harvard-Allston Task Force had finalized Harvard’s $28 million community benefits package, when in fact the full package was merely presented for the first time.