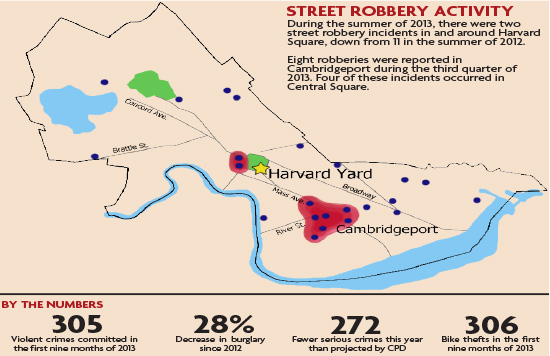 In the last week of September, six violent street robberies were reported throughout Cambridge, primarily occurring between 8 p.m. and 2 a.m.
By Michael V. Rothberg, Contributing Writer

The overall crime rates in Cambridge have fallen 9 percent in the first three quarters of 2013 compared to last year, but the number of violent crimes has increased by 18 percent between August and September 2013, according to a monthly report from the Cambridge Police Department.

The report also identified a high concentration of bicycle theft in Harvard Square.

Of the 33 total violent crime incidents in September, 12 were robberies and 19 were aggravated assault, which represent increases of 20 and 27 percent, respectively, compared to August.

“It is common to see increases in these types of crimes between August and September as students are returning to school, and there are a larger number of people in the city,” said CPD spokesperson Daniel M. Riviello in an emailed statement to The Crimson.

In the last week of September, six violent street robberies were reported throughout Cambridge, primarily occurring between 8 p.m. and 2 a.m.

“Street robberies at this time of year have been a persistent seasonal problem for a decade, with new students arriving in the city and, possibly, with the release of new cell phone technology around this time period for the past several years,” Riviello wrote.

Compiling and mapping data from each reported robbery in the Cambridge area, CPD also identified patterns in the locations where these crimes have occurred. Among the 306 bicycles that were stolen in the first nine months of 2013, CPD reported the highest concentration of bicycle thefts were  in Harvard Square. The department noted that most of these bicycles were secured to bicycle racks or poles and stolen in the daylight hours.

Despite the increase in incidences of violent crime in September, the total crime rates in Cambridge dropped by 9 percent in the first three quarters of 2013 as compared to the same time frame in 2012.

When compared to a weighted average of the past five years, the crime rate in the first three quarters of 2013 has decreased by 10 percent.