With Big Data on the Rise, Blitzstein Boosts Stats at Harvard 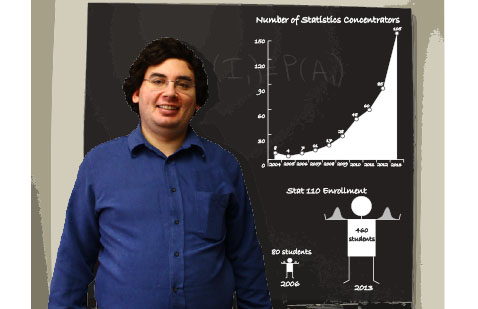 The clutter of Joseph K. Blitzstein’s office on the 7th floor of the Science Center seems to suggest the classic trappings of a college professor—except, perhaps, the rather extensive collection of feline memorabilia.

“I don’t really collect cat stuff,” Blitzstein, a professor of the practice in the Statistics Department said. “But people give me cat stuff because they know I like cats.”

Blitzstein is the proud owner of two cats—“big fluff balls,” as he calls them. “Worf is the older one, and Jack is the younger one,” he said, clarifying, “Yes, like Star Trek.”

Despite growing interest nationwide in statistics and “big data” over the past decade, students and faculty in the department have said that much of the new excitement for the field at Harvard is due to Blitzstein’s personal commitment to teaching and the enormous influence he has had on the undergraduate body.

Statistics professor Carl N. Morris remembers interviewing Blitzstein for a teaching position in the department nearly eight years ago. At the time, Blitzstein had just finished up a doctoral degree in mathematics at Stanford.

Statistics professors and students say that what makes Blitzstein’s teaching so unique are the real-life examples he uses to introduce complex statistical concepts.

“The key is his ‘stories,’” Morris said. “He’s just very good during lectures at telling stories, not just putting formulas up on the board but telling a story on how you can figure out something very interesting.”

“One of the best things about his teaching style is that he’s very good at laying out examples in a very logical manner so they naturally build on each other,” said Matt J. Rauen ’16, a mathematics and computer science concentrator who took Stat 110 this fall.

Blitzstein said that he decided to teach because he has always enjoyed explaining ideas to other people.

“There’s just this special feeling when you kind of see the light bulb going off...when the concept is really difficult, but then it suddenly clicks for the student,” Blitzstein said. “I really enjoy those moments.”

Blitzstein’s teaching style has also been an inspiration for his colleagues. “I would say Joe has taught me a lot about how to teach at Harvard,” said professor of the practice of statistics Stephen Blyth, who is also the head of public markets for the Harvard Management Company.

According to colleagues and students, Blitzstein’s style has helped to fuel the growth of Stat 110, the probability course that serves as a gateway into the concentration. When Blitzstein first taught the class in 2006, it counted 80 students. This fall, 460 undergraduates took the course.

“When you look around the country at similar courses, all universities report growth in courses like Stat 110…but ours is much bigger than expected after you adjust for the size of Harvard’s undergraduate body,” said Statistics Department chair David P. Harrington.

NOT REGRESSING TO THE MEAN

Students and professors say that Blitzstein has been able to successfully raise the profile of the field of statistics among undergraduates without compromising its mathematical rigor.

“[Stat 110 is] probably the hardest undergrad stat class at Harvard, but most people just enjoy the class anyway,” said William Z. Chen ’14, a statistics concentrator and a teaching fellow for the course.

In spite of the course’s growing popularity, Blitzstein said that he does not intend to dilute its content.

“I’m determined to never water it down,” Blitzstein said. “Stat 110 is also the key foundation for the upper level stat classes, so I feel that I’d be doing a disservice to anyone who wants to take 111, 123, and various other stat classes which really require a good understanding of this.”

According to Sebastian M. Chiu ’14, also a statistics concentrator and a teaching fellow for the course, Blitzstein has been very honest about its difficulty.

“He’s still able to make the class very difficult and rigorous, as rigorous as it needs to be, but he still is able to maintain such a good relationship with all of the students,” he added.

With the ability to analyze “big data” becoming more essential in both academic and corporate contexts, universities around the world—Harvard included—are experiencing a growth in the study of statistics.

Yet even after acknowledging these factors, colleagues say that interest in statistics at Harvard’s undergraduate level has outstripped all expectations.

At Harvard, according to Blitzstein, 68 sophomores declared statistics as a concentration this year, a 50 percent increase from 2012 that brings the current concentration size to 150 undergraduates. For the past six years, each incoming class of concentrators has been larger than the last.

“The growth [at Harvard] has been a little more rapid than we anticipated, but...even five years ago we could see the beginnings of it,” Harrington said.

Driving this growth is what Blitzstein calls “an explosion [in] the availability of data.”

“There’s going to be so much value that [companies] can get if they can get really intelligent people who can just look at the data and extract insights from it,” Chen says. “I’m going to be a data scientist after I graduate—that’s a job that didn’t exist five years ago.”

Computer science professor Hanspeter Pfister said that the growth of data science was such that “it’s basically becoming, if you will, another pillar of the scientific inquiry.”

“We’re amassing all these huge data sets,” said Pfister, who co-teaches with Blitzstein, adding, “all of these data sets contain something, and it’s not quite clear what they contain until you have data scientists look at it.”

This fall, to satisfy student interest in the burgeoning field of study, Blitzstein and Pfister are co-teaching CS109: “Data Science,” a new course with a total enrollment of 327 students, including 202 undergraduates, according to Pfister.

Pfister said he and Blitzstein started to think about the class about a year and a half ago and designed it this past summer.

“I’m extremely happy to be doing this together with Joe,” Pfister said. “He is just able to relay very deep technical concepts in a conversational manner such that, in my opinion, [the material] is very easy to understand. And so it’s been really fun watching him teach these complicated concepts in a way that makes it accessible to non-statistics concentrators.”

OUTSIDE THE DATA FIELD

Statistics professors emphasized Blitzstein’s generosity, humor, and dedication to students as defining traits of his presence at Harvard.

“That’s generosity beyond anything I encounter normally in practically any individual at Harvard,” Harrington said, pointing out the many hours that his colleague dedicates to individual students outside the classroom.

“He’s a very caring person and tries to help everybody,” Morris said. “He’s one of these guys that just make things go better for everybody, and he gets along with everybody very well.”

To undergraduates, Blitzstein’s personal investment in their education is evident in his daily interactions with students.

“He’s just generally a very caring person. I think more so than other professors I’ve been in contact with, he’s really good at just like asking general questions like ‘How are you doing?’ and ‘How things are going?’” Chiu said. “I think that just because how Joe treats his students, I feel a lot more comfortable being open.”

In his limited down time, Blitzstein serves as the faculty advisor for the undergraduate chess club. He is also an ardent fan of George R. R. Martin’s series “A Song of Ice and Fire” and the books of science fiction author Isaac Asimov.

In fact, Blitzstein said he once considered writing himself.

“I wanted to be a science fiction writer when I was a kid, but I never got very far with it,” he said.

But for members of the Statistics Department at Harvard, Blitzstein’s choice to enter academia has been a benefit to all parties.

“He has enabled likely a whole generation of Harvard student to engage with that and go down many different pathways, whether it’s into computer science or genetics or finance or whether it’s just not a quantitative field at all,” Blyth said. “He’s made something special of it.”

—Staff writer Francesca Annicchiarico can be reached at fannicchiarico01@college.harvard.edu. Follow her at @FRAnnichiarico.

—Staff writer John P. Finnegan can be reached at johnfinnegan@college.harvard.edu. Follow him at @finneganspake.