The Making of a Harvard Feeder School 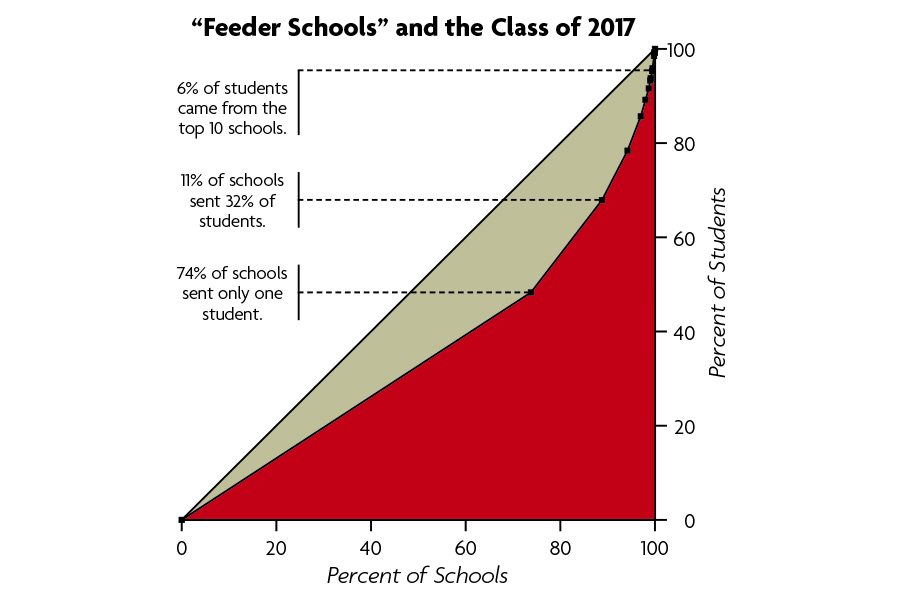 The graph shows the unequal distribution of high schools in the Harvard Class of 2017. The straight line (above tan shading) is an even distribution. Data is from the Freshman Register.
By Meg P. Bernhard, Crimson Staff Writer

Although Harvard prides itself on its 1636 founding, the city of Boston established the nation’s oldest educational institution—Boston Latin School—a full year earlier.

“There’s a joke that Harvard was started a year after our school as a place for our students to go,” said James Montague, a counselor at Boston Latin.

375 years later, Boston Latin students still go north of the Charles to continue their education—by Montague’s count, the school contributed 15 students to Harvard’s current freshman class, one of only a handful of schools to send 10 or more students to the College this year, according to numbers obtained from Harvard’s freshman register.

In total, one out of every 20 Harvard freshmen attended one of the seven high schools most represented in the class of 2017—Boston Latin, Phillips Academy in Andover, Stuyvesant High School, Noble and Greenough School, Phillips Exeter Academy, Trinity School in New York City, and Lexington High School.

Although these schools vary significantly, ranging from private boarding schools to local public schools, their administrators and alumni trace their success to some or all of three different factors: a selective admissions process, strong college counselling, and academic cultures that foreshadow the Harvard experience.

FIRST ROUND OF APPLICATIONS

For most of the students at Harvard’s so-called “feeder schools,” applying to college feels almost familiar—many of the high-schools who are well-represented at the College have their own selective admissions requirements.

“I think, if anything, the process [of applying to high school] is a bit more strenuous than it was for applying to college,” said Tez M. Clark ’17, who is also a Crimson editorial writer, about her experience applying to Exeter nearly five years ago. “I definitely felt nervous.”

Exeter and similar private boarding schools require a substantial application, which takes into account test scores, letters of recommendations, grades, and personal essays. The most prestigious schools receive thousands of applications a year, from all over the world, and have admissions rates similar to those of top-tier colleges. Phillips Academy in Andover—which sent 18 students to Harvard this year—accepted only 13 percent of those who applied.

At many of the public schools who consistently send students to Harvard—like Boston Latin and New York’s Stuyvesant—admission depends on the result of competitive tests that students take in elementary or middle school.

Harvard students from selective high schools, both public and private, said that their high schools’ admissions requirements might explain why so many of their classmates matriculate at Harvard.

“To me, it’s understandable that there are more students from Exeter than from a different school just because Exeter has already selected very competitive students, and Harvard’s drawing from a high concentration of competitive applicants,” Clark said.

“I think often a student who comes here has either exhausted the offerings of their home school or they are feeling like they’re up for a different kind of challenge during high school,” he said. “So they certainly work very hard.”

As early as fall of their students’ junior year, the top-represented high schools at the College use thorough counseling programs geared toward preparing students for college applications.

According to David Ding ’16, an Andover alumnus, each student at Andover is assigned a college counselor who keeps track of application deadlines, writes letters of recommendation, and reviews student essays.

“We encourage students to apply to a broad range of schools, and we’re really trying to help them find a match,” Palfrey said of Andover’s counseling program. “For some students that match may be an Ivy League school, and for other students that school may be another one.”

Casey J. Pedrick, Director of College Counseling at Stuyvesant, said she and her counseling team make themselves available to students almost 24/7 during the college application process, leaving their doors open whenever a student needs advice.

“We’re really good about being able to answer emails at night and making ourselves available for communications over the summer,” Pedrick said. “They’re always thankful when they see an email or a reply back at midnight.”

“All of our college counselors also teach, and then 75 percent of their job is college counseling,” said Snyder. “We want as many people as possible in the classroom with kids.”

Like counseling programs at other secondary schools that regularly send students to Harvard, Noble and Greenough’s program is comprehensive. It advises students on which courses and standardized tests to take, helps students determine their academic interests, and communicates with students about application deadlines.

“We’re very lucky,” said Snyder. “Both in being able to have really talented kids come into the school and then providing this program for those kids.”

Because students from these secondary schools were exposed to educational and extracurricular opportunities similar to those offered by universities, they felt encouraged to apply to schools like Harvard.

“Harvard is a natural continuation of boarding school,” Ding said of Andover. “We had really hard classes, we had opportunities to do research, to participate in all sorts of different extracurricular activities.”

Palfrey, who attended Exeter during high school, also said his move from preparatory school to college was facilitated by his experience studying with intelligent students and exploring the school’s course offerings.

“I felt like I had an easy time with the transition to college,” Palfrey said, “Whereas for others there was a larger cultural leap between their high school experience and their Harvard college experience.”

Noble and Greenough, like Andover, gears its curriculum toward college preparation, offering classes like “Biochemistry Research” and “Politics and Ethics.”

“Each department sets their own curriculum and what they do is they try to gear it to challenge our most talented kids,” Snyder said. “Often times that means coursework that would be much more like a college seminar.”

Stuyvesant, like many other selective secondary schools, has a long history of sending students to the Ivy League.

And Harvard’s relationship with Boston Latin is well established.

“There is no doubt there is a long rich tradition between Harvard and Boston Latin School,” Montague said.