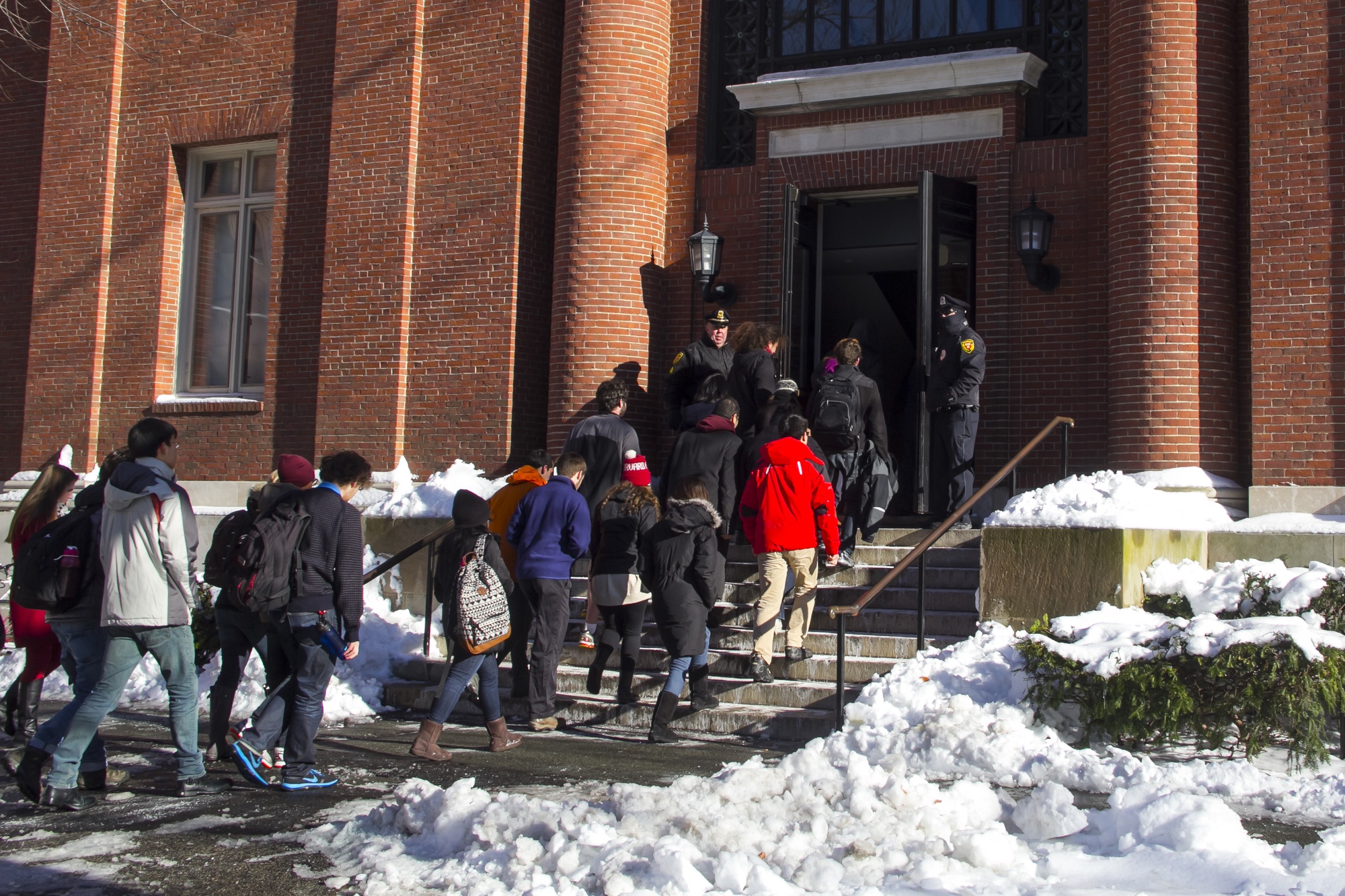 Students enter Emerson Hall to take their final examinations after it had been deemed safe by University officials.
By Matthew Q. Clarida, Crimson Staff Writer

An apparently unfounded emailed threat of live explosives in three academic buildings and one dormitory near the center of Harvard’s campus on Monday morning prompted exam cancellations in several large courses, the descent of federal, state, and local law enforcement, and a White House briefing.

Hundreds of Harvard College students were prematurely roused from bed or abruptly interrupted from their final examinations shortly after 9 a.m., when Harvard University Police sounded alarms in four campus buildings. The evacuations of the Science Center, Emerson Hall, Sever Hall, and Thayer Hall sent scores of students into Harvard Yard and the Science Center Plaza, leaving police to search the premises. With the developing situation attracting national media attention, little happened as a nearly six hour investigation yielded no explosive contraband and authorities issued the all-clear shortly before 3 in the afternoon.

According to department spokesperson Steven G. Catalano, the threat came in an emailed message to an affiliate of HUPD that was timestamped, according to Executive Vice President Katherine N. Lapp, at 8:40 a.m.

A Harvard spokesperson who declined to be identified confirmed that the email received by the HUPD affiliate was “nearly identical” to an email received at 8:45 a.m. by Crimson President Robert S. Samuels ’14. Under the subject line “bombs placed around campus,” the email to Samuels read, “bombs placed in: science center [and] sever hall [and] emerson hall [and] thayer hall. 2/4. guess correctly. be quick for they will go off soon.”

After the HUPD affiliate read the emailed threat, the department immediately dispatched officers because the email specifically named its targets, according to the Harvard spokesperson. Simultaneously with the dispatch, the spokesperson said, HUPD drafted a MessageMe alert to the Harvard community, the first of more than 10 emails that College students would receive from Harvard officials throughout the day. Repeatedly in those messages, administrators stressed that they were acting out of an “abundance of caution” in an effort to keep the campus community safe.

By the time that first MessageMe alert was sent at 9:02 a.m., HUPD officers had already started evacuating the targeted buildings. Another alert, at 9:13 a.m., reported that HUPD and Cambridge Police were on the scene and investigating. By noon, state and federal authorities had arrived on the scene, and President Obama had been briefed on the situation, according to a White House spokesperson.

Not long after the building evacuations, authorities closed Harvard Yard. Students evacuated from the Science Center who had initially thought the disturbance was nothing more than an ill-timed fire drill were directed to an Annenberg Hall that quickly overflowed from the combination of the usual breakfast rush and those displaced from exam rooms and bedrooms.

Dean of Undergraduate Education Jay M. Harris soon joined the students in Annenberg, where he would later be joined by University President Drew G. Faust and interim College Dean Donald H. Pfister. After discussing the situation with a number of teaching staff, Harris climbed on a table and announced that all of the exams scheduled that morning in the three affected classroom buildings had been cancelled. During his impromptu speech, Harris did not settle definitively the question of whether cancelled exams would need to be made up.

Throughout the morning, students with exams scheduled for the day received emails from teaching fellows and professors, many of whom expressed uncertainty about how their courses would be graded, and if students would be required to make up exams. With three major academic buildings still shuttered, students slated to sit for finals at 2 p.m. were cast into an uncomfortable holding pattern. Just after 12 p.m., the University notified parents of undergraduates of the ongoing situation.

With the search turning up no evidence of explosives, life in the Yard began to return to normalcy as the day progressed. The Yard reopened to Yard residents before 11 a.m. And, at 12:40 p.m., Securitas guards stood by Johnston, Widener, Lamont, and the Science Center gates, allowing Harvard ID holders into the Yard. Shortly before noon, several dozen students could be found studying in Lamont Cafe, as well as in Lamont’s reading rooms. At least three others had fallen asleep, some at tables, others on couches.

Early in the afternoon, HUPD sent out alerts announcing that Emerson and Thayer, and then Sever and Harvard Yard, were safe for return, but officers continued to search the Science Center, forcing the cancellation of afternoon exams set to be held there. In an email to undergraduates just minutes before 2 p.m. exams were scheduled to start, Administrative Board Secretary John “Jay” L. Ellison wrote that any students who felt unprepared to take their still-scheduled afternoon exams could be excused from the sitting.

Those who opted to forgo uncancelled afternoon exams, Ellison wrote, could choose to be graded on coursework to date, excluding the final, or to be evaluated on a pass/fail basis without penalty. In an email later in the afternoon, Ellison reiterated that the rest of the week’s exams remained scheduled.

Authorities finally cleared the Science Center at 2:44 p.m., effectively declaring an end to the campus scare. As of press time, Catalano would not comment on whether the investigation had turned up any suspects.

—Antonio Coppola, John P. Finnegan, and Dev A. Patel contributed to the reporting of this story.