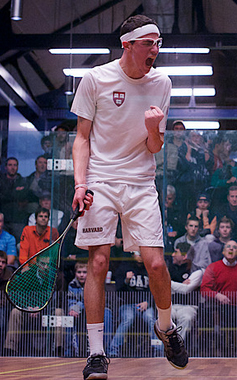 When he lunges towards the ball, the white rubber soles of his shoes squeak against the hardwood floor. Ali A. Farag ’14 is lanky and agile; he strides around a boxy squash court at the Murr Center, stretching out his racquet to send the small ball ricocheting off the front wall at calculated angles.

"The thing about Ali is that he starts moving towards the ball before the other guy even hits it," a teammate says as we watch Farag hit at Monday evening practice. "[Ali]’s just really efficient [...] He can use minimal effort to get perfectly to the ball."

Exiting the court, Farag greets me with an enthusiastic grin. He is genial and chatty as he leads me to a sitting room beside the courts. On the way we pass beneath a banner of Harvard’s Men’s National Squash Champions: Farag is listed on the 2012 line.

"I don’t even remember the first time I picked up a racket. I was probably six or seven," he says as we sit beside a coffee table adorned with the "H" athletic crest. He took up the sport to follow his lifelong role model: his older brother Wael. Since picking up squash, Farag has practiced every day and sometimes twice a day, basing his training out of Cairo’s Heliopolis Club. He was winning national tournaments in Egypt by age 10.

When Farag considered quitting squash as a teenager, his brother encouraged him to persevere and volunteered to become his coach: Wael believed Ali could be a world champion. "To see someone who believes in you that much and loves you that much and cares about what you’re doing—because it’s you—just adds a lot to your self esteem and your confidence," says Farag. Under his brother’s coaching, Farag went on to place second in the World Juniors tournament. In 2011 he won the British Junior Open, an equally prominent international tournament.

Farag began college at American University in Cairo, but when the Egyptian revolution broke out and his parents requested he leave the country, he transferred to Harvard for sophomore year. "My goal in being here is to help Egypt after I graduate," Farag says. He repeats this phrase throughout our conversation. It seems to be his credo, his driving philosophy.

"Everyone is depressed now with what’s going on [in Egypt]," Farag says. "I have a very different feeling. I’m very optimistic about what is happening." He mentions the French Revolution, noting that full recovery from that conflict took time and that the same will be true of Egypt. "We’re not on the right track right now, which is kind of worrying, but we’re going to get there."

Farag says Egypt’s recovery depends on the country’s most educated committing to solving the nation’s problems. "If every one of the educated people in Egypt—which is no more than 10 percent of the country—does something in his own field, then Egypt will bounce back," Farag says, his voice unwavering.

Farag has already started planning the contribution he plans to make back home. A "science-y person" who has always adored math and physics, Farag is pursuing an Engineering S.B. degree specializing in Mechanics and Materials Science. His demanding course schedule has necessitated taking four engineering classes some semesters, atop his varsity squash commitment. But Farag is unintimidated.

Farag plans to put his engineering studies to work in Egypt by developing what he calls the underutilized resource of solar power. His thesis uses MATLAB to model hydro storage data about the way that solar energy is stored overnight, which Farag hopes will uncover paths to cheaper and more efficient hydro storage methods.

After graduating in May, Farag will return to Egypt for 13 months of mandatory military service. He will also coach squash for a while—it’s good money for a 22-year-old and will help him become financially independent. But his long-term plan is engineering; he’s already researching the paperwork he will need to get his U.S. degree to meet Egyptian accreditation standards for engineers. "Someday, something will happen," he says. "Together we will lift up the country."