University Spends More Than $500,000 in Washington 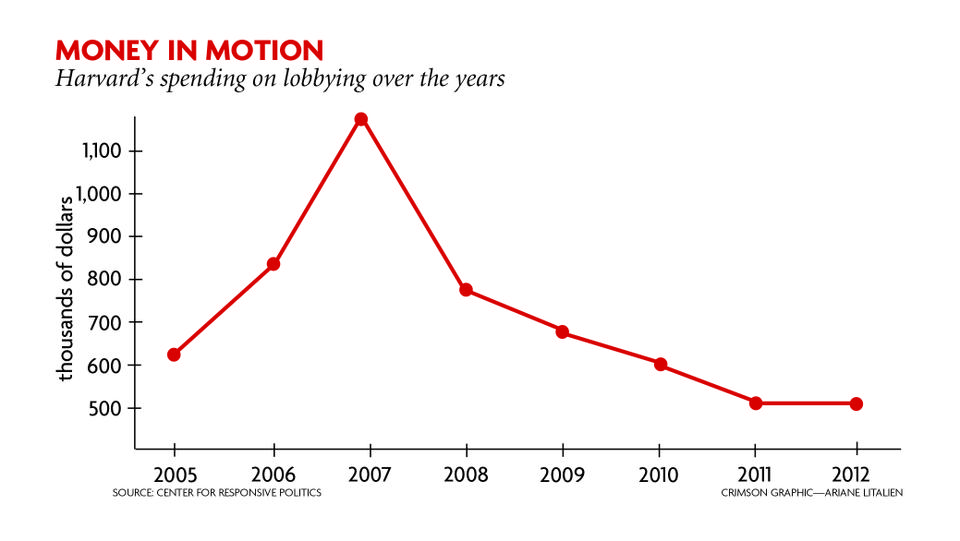 Harvard’s Office of Federal Relations spent about $510,000 on lobbying in Washington D.C. in the calendar year of 2012, approximately the same amount as in 2011, according to public records filed with Congress.

Throughout 2012, Harvard lobbied on legislation relating to education, federal research funding, and charitable deductions, among other issues, according to the forms. Their efforts targeted both chambers of Congress, the White House, and the Departments of Education and Health and Human Services.

A little more than $100,000 of the money spent by Harvard on lobbying in 2012 went to the law firm O’Neill, Athy, and Casey, which advises and conducts research for the University’s lobbyists.

Harvard’s D.C.-based federal relations office coordinates the University’s lobbying efforts by communicating with members of the Massachusetts congressional delegation and with members of committees that cover issues of concern to Harvard, such as budget appropriations, science, health, education, and labor.

“When big issues are being discussed by the government, like discretionary spending, [lobbying] shows that we have this really strong partnership,” said Kevin Casey, associate vice president for public affairs and communications. Casey staffs Harvard’s D.C. office with Suzanne Day, director of federal relations.

Casey and Day said that the budget crises over the past couple of years, including last year’s debate over deficit reduction that threatened Harvard’s research funding, has required targeted attention from Harvard’s lobbyists.

“I think there was a certain intensity to the communications with campus at that time,” Casey said. “The timing was unusual, but I wouldn’t say it was at all unpredictable.”

He added that sequestration—non-defense discretionary spending cuts that will take effect if Congress does not agree on a budget by March 1—still poses a threat to Harvard’s research funding. Casey said that in its lobbying efforts, Harvard has tried to convince Congress that supporting education and research facilitates innovation, which is crucial to a thriving economy.

“We’re still hopeful that in the time between now and the sequestration deadline, that some of the arguments about research and education being the solution take hold,” Casey said.

While Harvard has directed far more money towards lobbying at times, Day said that these fluctuations are less a result of economic conditions than a product of the type of issues on which Harvard’s lobby focuses its attention.