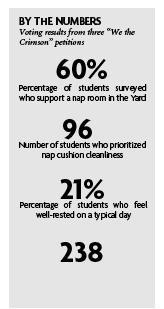 Petitions for a nap space in Harvard Yard, extended dining hall hours, and weekend brain break are all slated to receive official responses from Dean of Harvard College Evelynn M. Hammonds, likely by the end of the semester.

The student-initiated petitions were submitted to Hammonds as a part of the “We the Crimson” initiative, started by the Undergraduate Council last November. The initiative features an online portal that students can access to submit petitions and vote for other submitted petitions. At the end of each month, the top three petitions are submitted to the administration for an official response.

One of the petitions, started by Yuqi Hou ’15, proposes the creation of a space in Harvard Yard for students to take naps.

“People don’t realize how important it is to take a nap,” Hou said. “It improves your GPA because you’re actually more focused.”

Hou first thought of the idea in December. After meeting with the Harvard Center for Wellness and Interim Associate Dean of Student Life David R. Friedrich, Hou turned to “We the Crimson” to gain student support for her idea.

Hou complemented the petition, which received 184 votes, with an online survey.

Of the 432 students from across the University who responded, only 21 percent felt well-rested on a typical day. Almost 60 percent of those surveyed were in favor of a designated nap room in the Yard.

However, some students who were supportive of the petition also voiced concerns.

Harry W. Hild ’16, supporter of the idea, pointed out that 96 students ranked cleanliness of the nap cushions as the most important factor.

“I’m not sure I’d want to hop on someone else’s beanbag after they’ve used it,” he said.

Two other petitions from January were submitted to the Dean for response.

One petition, which received 238 votes as of Sunday, asks for at least one dining hall to offer service until midnight.

“I’m kind of a night person and often times a 7 p.m. closing time for dinner is pretty early,” said Michael F. Trang ’14, who started the petition.

The other petition asks for the brain break service to include the weekend.

As a Drug and Alcohol Peer Advisor, Margaret E. Crane ’14, who proposed the petition, questioned why brain break isn’t offered on weekend nights.

“Providing students with food past 7 p.m. will allow them to have a full stomach if they choose to drink, and create a social space in the dining hall,” Crane said.

Although all three students hope that the administration will consider their proposals, Hou expressed some skepticism.

“I think that the administration will take a look at [the petition] and decide if there’s enough student support and demand they’ll do it,” Hou said. “But in general, I don’t have too much faith in the administration.”

An earlier version of this article incorrectly reported that the 432 Harvard students who responded to an online survey about a proposed nap space were undergraduates. In fact, while 418 of respondents were from the College, the survey also drew responses from students from Harvard’s various graduate schools.