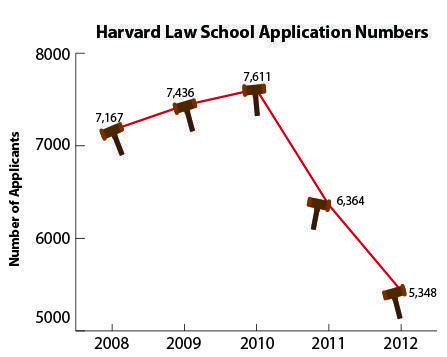 In the midst of a nationwide drop in the number of law school applications, Harvard Law School did not see the same dramatic decrease in its application numbers this year that it has in past cycles, according to the school’s Assistant Dean and Chief Admissions Officer Jessica L. Soban ’02.

As of Jan. 25, the number of law school applicants nationwide this year had decreased by 20.4 percent, according to the Law School Admission Council.

“For the past two cycles, we experienced a decline that was similar to the decline in the national pool, but this cycle is shaping up very differently,” Soban wrote in an email.

Although applications to the Law School were due last Friday, Feb. 1, Soban said she could not release the number of applicants for this cycle until the fall.

Last year, the Law School witnessed a 14.6 percent decline in applications, a drop that followed a 16.4 percent decrease from 2010 to 2011. Both dips in application numbers were in line with a trend experienced at law schools nationwide.

This nationwide pattern might be in part caused by the increasingly competitive nature of the job market for law school graduates.

“It’s been a flooded market for a long time, but it’s taken a while for that fact to be brought to the surface,” said Jay Donde, a student at the Law School.

But while concern over the job market has plagued students at law schools across the country, employment rates for Harvard Law School graduates have remained somewhat constant over the past 20 years, according to Soban. For the past three years, the Law School’s after-graduation employment rate has been about 95 percent.

Kyle P. Elder, a student at Harvard Law School, said that while students might not get their first choice of jobs, Harvard graduates can depend on having options for employment.

“Harvard’s Harvard, so you’re always going to be able to get a job,” Elder said.

“[Not including] the top tier of law schools, it’s a lot harder to get a job that can offset the cost of going to school,” said So J. Kim, a student at the Law School.

Harvard Law School has attempted to counteract the often off-putting cost of getting a degree, increasing the total financial aid offered by the school by 50 percent over the past five years, mostly through loan repayment assistance and support for public service careers.