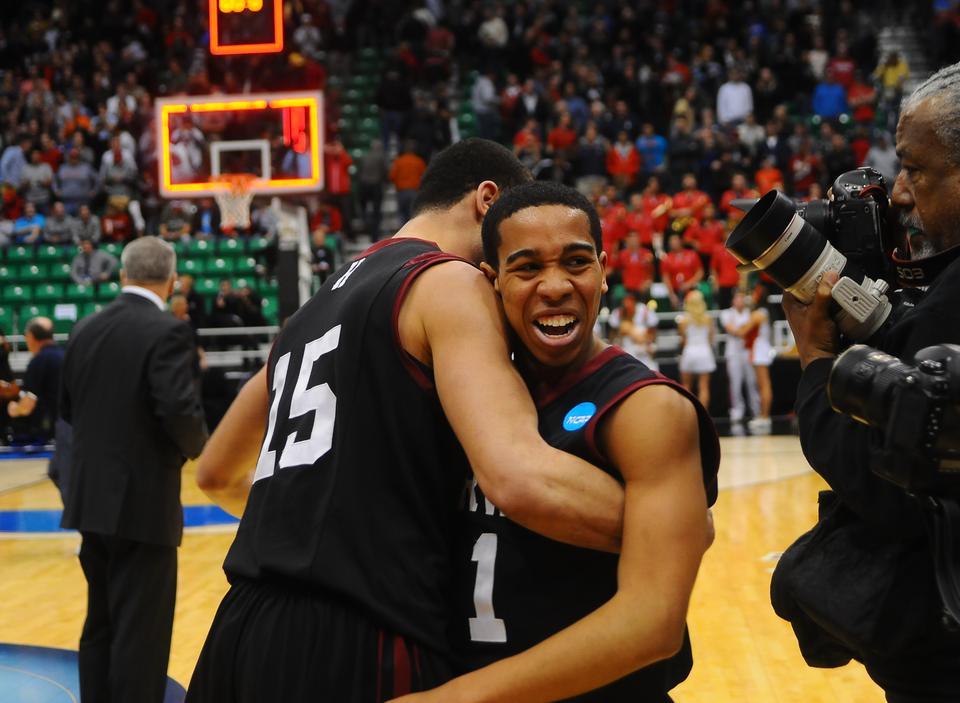 Christian Webster and Siyani Chambers celebrate the Harvard men's basketball team's victory over the University of New Mexico in the second round of the NCAA tournament.
By Scott A. Sherman, Crimson Staff Writer

SALT LAKE CITY—With every passing year of the Tommy Amaker era, it has become increasingly difficult for the Harvard men’s basketball team to accomplish a program first.

But on Thursday night, the 14th-seeded Crimson did just that when it shocked the third-seeded New Mexico Lobos—and the college basketball world—with a 68-62 win in the second round of the NCAA tournament.

“It’s unbelievable,” co-captain Christian Webster said. “We’re still in disbelief, can’t believe it happened.... This is just as good as it gets.”

“This is the type of thing you dream about in your backyard,” said sophomore Wesley Saunders, who led the Crimson with 18 points. “For it to actually happen now is incredible.”

With its first playoff victory in program history—and its first-ever win over a team ranked in the Associated Press top 10—the Crimson became the lowest-seeded team to win a game thus far and set up a third-round matchup with No. 6 seed Arizona on Saturday.

“What a sensational, gutsy effort,” Crimson coach Tommy Amaker said. “I thought we had to play an exceptional basketball game against an outstanding team.”

New Mexico, the heavy favorite that finished the regular season ranked No. 1 in the RPI, rallied to take a one-point lead at 53-52 with 6:26 to go.

But the Crimson would not go away.

Junior co-captain Laurent Rivard answered with a left corner three, Saunders rattled in a jumper with the shot clock winding down, and sophomore center Kenyatta Smith hit a lefty jump-hook over New Mexico center Alex Kirk to push the Harvard lead back to six.

The Lobos would not get within four the rest of the way.

“We just said we had to stick together and believe,” Saunders said. “They’re a great team, and we knew we couldn’t let down for a second.”

Harvard did not ease up, and after two Kendall Williams free throws cut the Crimson advantage to 64-60, Saunders and freshman point guard Siyani Chambers iced the game at the line.

With 18 seconds to go, Williams—the Mountain West Conference Player of the Year—missed a three and New Mexico grabbed the offensive rebound. But Saunders stole the ball and Harvard ran out the clock as the players and the hundreds of Crimson fans at the game erupted in joyous celebration.

“They had a lot of energy, a lot of focus, and they made tough shots,” Lobos coach Steve Alford said. “We just never could get in rhythm offensively...to really get a run and let our defense take over. We were just never able to do that.”

Harvard led throughout the first half and took a 31-27 lead into the break. But New Mexico scored the second half’s first six points to tie the game and then took its first lead at the 18:47 mark when Tony Snell went coast-to-coast for a layup.

But Harvard once again had an answer, as Webster and Rivard rattled in back-to-back threes and Chambers found Smith inside for a layup to put the Crimson back up six.

“I thought the composure that our kids displayed was terrific,” Amaker said. “We didn’t wilt or cave in.... I’m very, very proud of that.”

The teams went back and forth from there until Kirk’s layup with 6:26 to go put New Mexico up one. But Rivard’s fifth three gave the lead back to the Crimson, and Harvard—which had blown multiple late advantages against other tournament teams during the regular season—never looked back and slammed the door.

“[During the regular season], we had two or three losses at the end, and every time you learn and try to correct what you didn’t do well,” said Rivard, who scored 17 points and broke the Crimson single-season three-point record with his first long ball. “We showed more toughness than we did during the season to close out this game.”

Harvard survived despite the fact that its trio of undersized sophomore big men—Kenyatta Smith, Steve Moundou-Missi, and Jonah Travis—all picked up their fourth fouls late in the second half as the Lobos fed the paint over and over again.

“We found a little bit of success [inside],” Kirk said. “[But] they did a good job of doing what they could to stop us.”

The Crimson made 52.4 percent of its shots and saw four players—Rivard, Smith, Webster, and Saunders—score in double figures. Webster’s third point gave him 1,000 for his career.

“They struggled with making their shots, and I’m sure they were incredibly frustrated with that,” Amaker said. “But I like to think the way we locked in defensively...had something to do with it as well.”

Playing in front of 14,345 fans at EnergySolutions arena, Alford’s team came out ice cold, missing 11 of its first 12 attempts, including four straight missed threes. Harvard took advantage and raced out to a 9-2 lead.

But New Mexico then began to feed the post on nearly every possession and used a 14-5 run to tie the game as Smith was forced to sit with foul trouble.

After Harvard retook the lead, six straight points from Kirk got the Lobos within one with 4:37 remaining. But Harvard pushed the advantage back to six as Saunders hit a swooping layup and Webster drilled a left corner three. The teams then traded buckets the rest of the way, and the Crimson went into the break with the advantage.

In the second half, Harvard withstood the early New Mexico rally and became the 17th No. 14 seed all-time to win a first tournament game.

“[This] means the world to us,” Amaker said. “[It’s] a significant moment for us to be in this position.”