Against New Mexico, Men's Basketball Finally Closes Down the Stretch 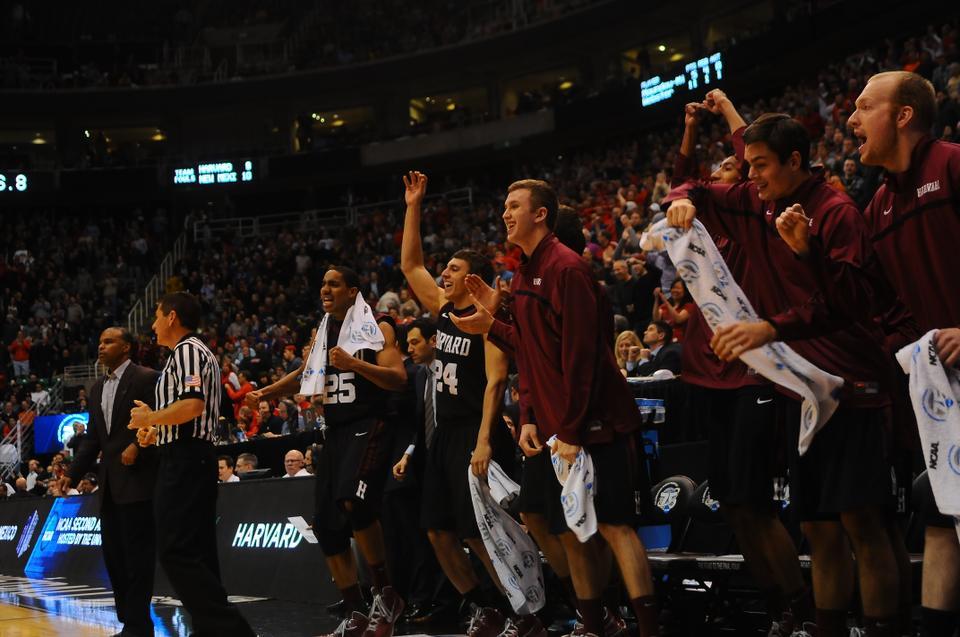 SALT LAKE CITY—The Harvard men’s basketball team had plenty of opportunities to let this one slip away.

And nobody would have blamed the Crimson if it had. After all, this wasn’t Dartmouth, Brown, or even Princeton that Harvard was sharing the court with. This was the University of New Mexico—the third-seeded, 10th-ranked Lobos.

So the Crimson wasn’t supposed to fight back when New Mexico opened the half on a 6-0 run to take its first lead of the game, nor when the Lobos went on a 6-0 run midway through the second half to grab a 49-47 lead with 7:53 to go.

But both times, the Crimson did.

And after a season of letting leads slip away, Harvard closed out the game when it mattered most, taking its NCAA opener, 68-62, in front of a national television audience Thursday night.

“What a sensational, gutsy effort by our team,” said Crimson coach Tommy Amaker moments after the victory, Harvard’s first postseason triumph in program history. “But I thought our toughness and courage carried us through with the belief that we had the opportunity in front of us.”

The Crimson first faced adversity late in the first half. After jumping out to a seven-point, 9-2 lead, the Lobos fought back to even the score at 16 with 6:19 remaining and at 18 with 5:13 to go.

The moment felt eerily similar to the Crimson’s last NCAA tournament appearance against Vanderbilt a year ago. With 5:28 remaining in the first half of that contest, 12th-seeded Harvard took a 20-17 advantage off a Christian Webster three-pointer.

That marked the last time that the Crimson led, as the Commodores answered with a crippling 16-3 run to close out the opening frame.

But this year was different.

After Lobos center Alex Kirk knotted the score at 18 with a layup, Harvard immediately answered on the other end. Rookie point guard Siyani Chambers drove to the basket and kicked it out to junior co-captain Laurent Rivard in the corner. Rivard drilled the triple and—after just 12 seconds—the Crimson was back in the lead.

Kirk responded with a bucket on the other end, but Harvard had another answer—this time courtesy of sophomore Wesley Saunders.

Saunders—who finished with a team high 18 points—finished at the basket for his third field goal of the frame.

Two Webster triples over the next 1:44 put the Crimson up by seven, and Harvard went into the break up by four, 31-27.

“We showed a lot of toughness tonight and persevering,” Webster said. “Whenever they made runs we fought back.”

The Crimson faced perhaps its biggest threat coming out of halftime when New Mexico opened the period on a 6-0 run to go up by two, 33-31—its first lead of the contest.

That advantage would only last for 12 seconds, as Harvard once again answered on the following possession with Webster drilling a deep three-pointer from the right wing.

The Lobos took back the lead with 7:53 to go off a Jamal Fenton three pointer, but once again the Crimson had an answer.

After a lengthy possession, Rivard was fouled with the shot clock winding down, and the junior proceeded to hit two free throws to even the score.

With 6:16 to play, Rivard nailed a corner triple off a pass from Chambers to give the Crimson the lead for good. Harvard went up by eight with 2:17 to play and its lead never dipped below four the rest of the way.

“I thought we played a really good 40 minutes,” Amaker said. “I thought the composure that our kids displayed was terrific.”

It was a fitting bookend to a season that opened with disappointment. In its Division I opener, Harvard fell to UMass at the buzzer after leading by five with 1:21 remaining. Nearly two months later at Saint Mary’s, the Crimson fell by one after leading by 10 with 3:56 to go.

But on Thursday, Harvard closed out its talented non-conference opponent.

“I think every time we learn from what we did wrong,” Rivard said. “Now we’re at the end of the season, and we had time to correct that, and we showed more toughness that we did during the season to close out this game.”