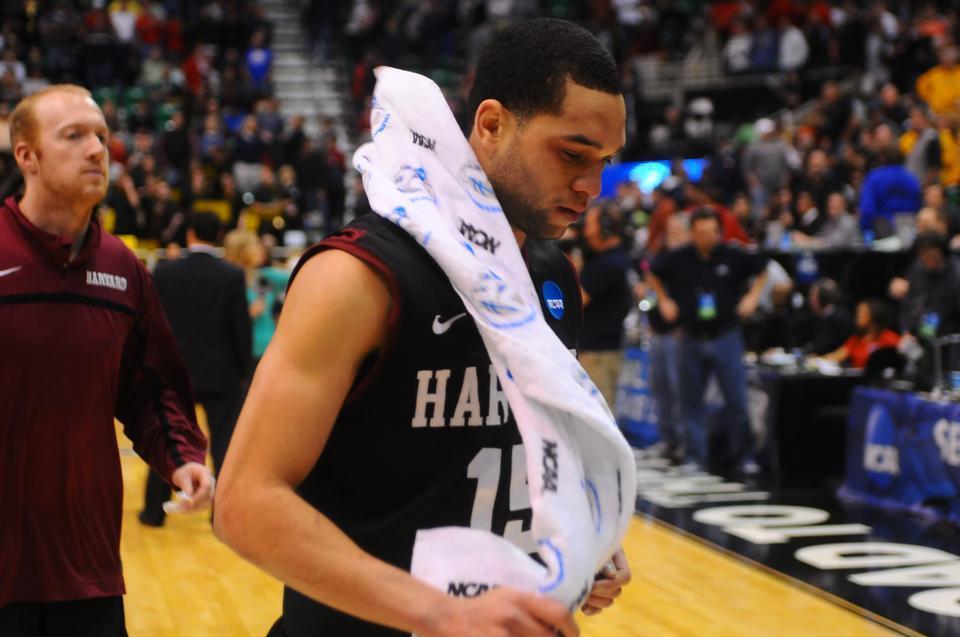 In his final Harvard game, co-captain Christian Webster tallied eight points in a loss to Arizona in the third round of the NCAA Tournament.
By Martin Kessler, Crimson Staff Writer

SALT LAKE CITY—Since the start of the 2012-13 season, the motto of the Harvard men’s basketball team has been, “We may not have what we had, but we have enough.”

But when the Crimson met the University of Arizona on Saturday in the third round of the NCAA Tournament, that wasn’t the case.

“They deserved to win,” Harvard coach Tommy Amaker said of Arizona, which will take on No. 2 Ohio State in the Sweet Sixteen. “Arizona played an outstanding ballgame.”

After shooting a blistering 52.4 percent from the field in an upset victory over New Mexico Thursday, the Crimson struggled to find the bottom of the net against the Wildcats’ pressuring defense.

The Crimson shot just 27.6 percent from the floor—a season low—and connected on just five of 18 attempts from deep.

“Disappointing for us that we didn’t play better,” Amaker said. “I think we’ve shown that we’ve been a better team than we displayed this afternoon.”

Sophomore Wesley Saunders, who led the Ivy League in scoring, was held to single-digit scoring for the first time this season. The wing finished with eight points after missing 10 of 11 shots from the field.

“We tried to drive and kick and penetrate and we needed open shots from the perimeter,” Amaker said. “We didn’t have either of those helping us. One usually helps the other, and neither were working for us.”

On the other end, Harvard struggled to contain Wildcat point guard Mark Lyons and the rest of the Arizona offense. Lyons finished with a season-high 27 points on 12-of-17 shooting.

As a team, the Wildcats shot 55.1 percent from the field and connected on nine of 15 three-pointers. The latter mark ties a record for best three-point shooting in an NCAA Tournament game with a minimum of 10 attempts.

Arizona opened the game on a 17-2 run as the Crimson missed its first 12 shots from the field. The Wildcats went into the break up 18, and extended their lead to as many as 25 in the second half.

“They pounced right on us from the beginning,” said co-captain Christian Webster, who combined with junior Laurent Rivard to shoot three of 13 from deep. “I think it took us by surprise how hard they played, how physical they were, and like Siyani [Chambers] said, their length and size and speed. From there it was just an uphill battle.”

Rivard, who connected on five of nine triples in the Crimson’s win over New Mexico, finished with just three points after missing five of six three-point attempts.

“They locked down on him,” Amaker said. “You could see it was a point of emphasis for their team to not lose him.”

While Rivard struggled to get open looks, Lyons seemed to get his shot at will. The Xavier transfer made three of six from beyond the arc and finished with 16 points in the second half alone on seven-of-eight attempts.

“When the chips are down, end of games, big games, he’s ready,” Arizona coach Sean Miller said. “He doesn’t give you that nervous energy; he gives you just the opposite, a confidence that I believe has become contagious on our team.”

Early on though, it was senior Solomon Hill who was getting it done for the Wildcats. At 6’7”, 220 lbs. with the ability to stroke from deep, Hill presented a tremendous challenge for the undersized Crimson heading into the contest. Hill exploited his matchup in the early going, sticking a fadeaway jumper over Saunders on the Wildcats’ opening possession.

With 8:06 remaining in the period, Hill had already posted 10 points to the Crimson’s nine. Hill’s transition dunk put his team ahead, 30-9.

After missing its first 12 attempts, Harvard’s first field goal came off a Chambers three-pointer with 12:16 to play in the first period and the Crimson trailing 17-2. But Harvard was not without opportunities. The Crimson had a number of open looks from deep early in the contest, but started the game zero of four from beyond the arc.

Things did not improve for the Crimson following Chambers’ make, as Harvard went into the break shooting one of seven from deep and down 18, 40-22.

Coming out of the half, the Crimson made a slight push. Smith finished a pass from Saunders, and Webster stuck a triple from the top of the key off a pass from Chambers to make it a 15-point game with 18:44 to go.

Lyons responded with seven straight points for the Wildcats, and Arizona was back up by 20 before the 12-minute mark.

“I really believe that once we came out of that timeout we regained our composure a little bit, not that we were rattled, but we regained that hard play and concentration on defense.”

Arizona extended its lead to as many as 25 before winning by 23.

Despite the lopsided outcome, the Crimson leaves Salt Lake City with few regrets, having won its first ever postseason contest and its third straight Ivy League title.

“We accomplished all our goals this year,” said Webster, the Crimson’s lone senior. “We have nothing to be ashamed of. We’re going out with our head held high, and that’s what really matters.”