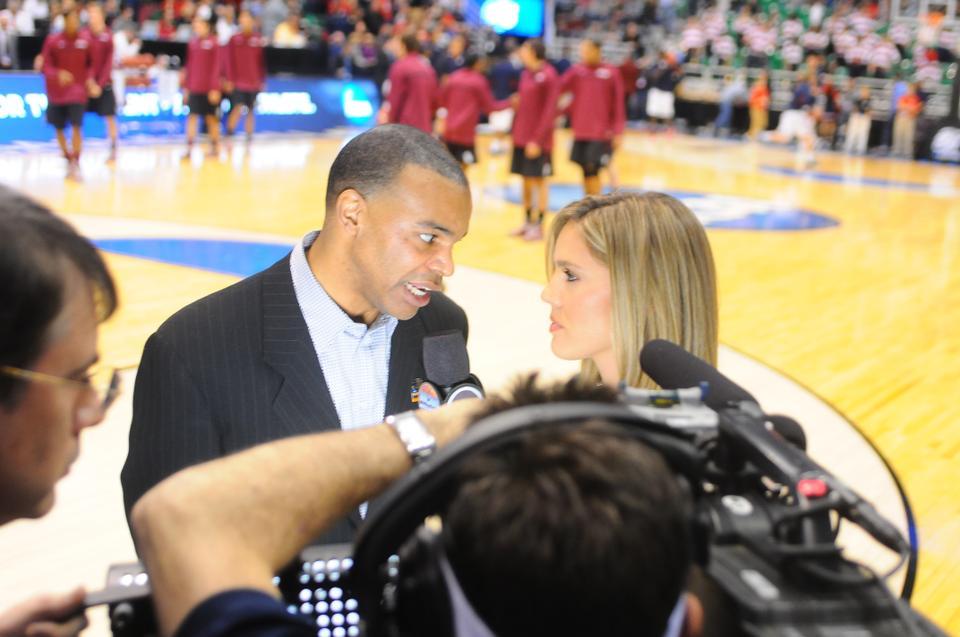 Under the direction of Harvard coach Tommy Amaker, the Crimson continued to rise this season, picking up its first NCAA tournament win.
By Hope Schwartz, Crimson Staff Writer

SALT LAKE CITY—History will call it a blowout.

On Saturday afternoon, Harvard fell, 74-51, in its worst offensive showing of the season in front of an arena full of Arizona fans chanting “Sweet Sixteen” as they watched their team move on past the third round of the NCAA tournament.

The Wildcats put on an offensive clinic and were ice on the defensive end, holding the Crimson’s two top scorers from the previous round—junior co-captain Laurent Rivard and sophomore forward Wesley Saunders—to 2-of-17 shooting.

For most college basketball programs, the loss would have been a setback. For the Harvard men’s basketball team, it was just another step in the right direction.

Picked to finish second in the Ivy League preseason poll after losing senior co-captains Kyle Casey and Brandyn Curry, the Crimson took the country by surprise by upsetting No. 3 seeded New Mexico in the second round of the tournament to advance.

Harvard’s victory was its first in the Big Dance, and for a couple days the team captured the hearts and minds of basketball fans across the country. The Crimson graced the cover of ESPN.com and other national news outlets, and memes of the Harvard band cropped up online.

“Nerd” jokes abounded, but the media marveled at how Crimson coach Tommy Amaker was able to build a competitive team given his lack of scholarships and comparatively low funding.

The Harvard student body—not normally known for its interest in school sports teams—took to social media and the Cambridge bars to follow their team’s run at history.

Though the Cinderella story wouldn’t last, the consequences are monumental for Amaker and the program.

Hired as the head coach in 2007, it took Amaker two season of posting losing conference records to get the team back on track. Since then, every year has been a milestone. In 2009, the Crimson defeated No. 17 Boston College in its first ever win over a nationally ranked team. In 2010, the team posted its winningest record in history and went to the CollegeInsider.com Postseason Tournament. In 2011, Harvard won a share of the Ivy title and the following year won it outright, making the NCAA tournament for the first time since 1946.

Amaker’s recruiting has been his major building block. Using the academic brand of Harvard to appeal to players, he has talked about how he lets the program and its opportunities speak for itself.

And it seems to be working. In his first season at the helm, Amaker recruited Keith Wright ’12 and Oliver McNally ’12, who captained the team to its first ever tournament berth. Since then he has landed three-star recruits like sophomore forward Kenyatta Smith and locked up the program’s first top-100 recruit in Zena Edosomwan, who will join the team next year.

The team’s only senior—co-captain Christian Webster—joined the team early in Amaker’s era, before Harvard had made tangible progress. Retiring as the Crimson’s winningest player in program history, the guard believes it will only continue to improve.

“Looking at where the program came from, it’s just rising,” said Webster after Saturday’s loss. “It’s going to take a lot of hard work, and that’s what we’ve been putting in so far. We’ll get there.”

As Webster steps out of the spotlight, he passes the torch to a talented young roster led by freshman point guard Siyani Chambers. Chambers echoed Webster’s pride in the program after the game, saying that the loss showed him that Harvard belongs in the tournament and can be competitive with teams like the Wildcats—nationally ranked as high as No. 4 this season.

Listening to Amaker talk about the program that he has built, he seems restless—like each milestone isn’t enough. He credits his players with believing in his vision and working hard to get where they are, but he is eager to move forward and take the next step.

“Every year is a new year,” Amaker said. “We hope to continue to keep scratching and grinding. With the kind of kids we have, I suspect that’s going to happen. They have worked hard for us all year, and the fact that they’re disappointed and dejected and down about the way we have ended this is an indication of how hard I think they will work and put in the effort so we can get better.”

Having captured the attention of the student body and sports fans everywhere, and with the prospect of adding Curry and Casey to its talented young roster, there’s no telling what the Crimson will be able to do in the years to come.

—Staff writer Hope Schwartz can be reached at hschwartz@college.harvard.edu. Followe her on Twitter @HopeSchwartz16.