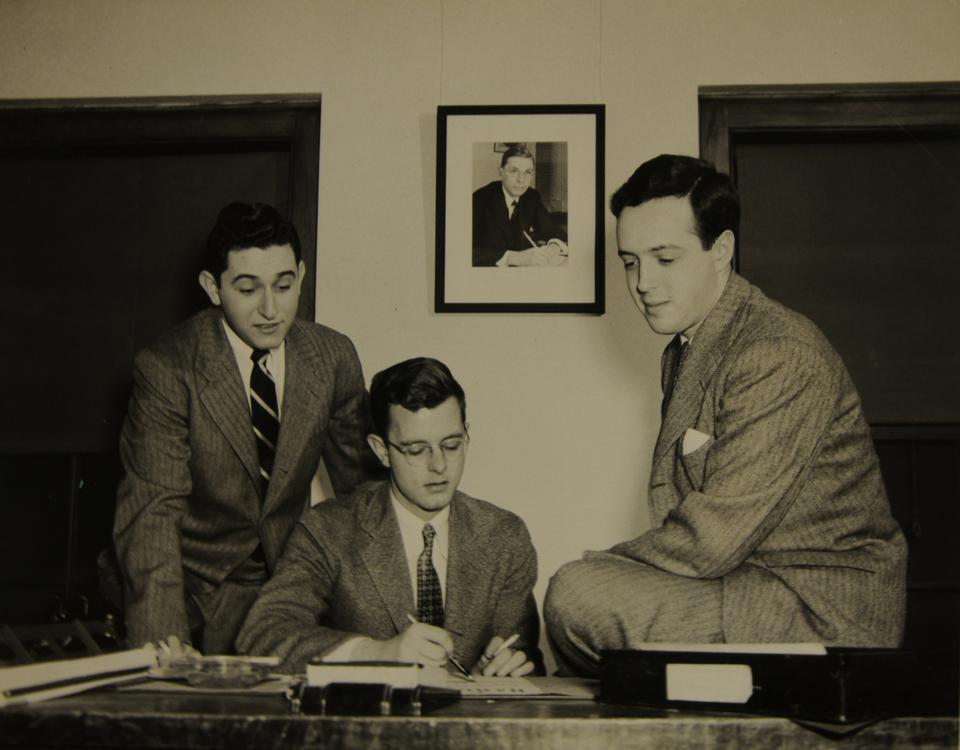 Anthony Lewis, New York Times reporter and columnist, passed away on Monday in Cambridge due to renal complications and heart failure. Lewis also served as Managing Editor for the Crimson and was the winner of two Pulitzer Prizes.
By Nicholas P. Fandos, Crimson Staff Writer

If there ever was a model Harvard journalist, his name was J. Anthony Lewis ’48. Starting in 1946—when he helped relaunch The Crimson as a daily after World War II—through a long career as a Pulitzer Prize-winning legal correspondent and columnist for the New York Times, until his death Monday at the age of 85, Lewis helped steer modern liberal journalism through his pioneering coverage of the Supreme Court and coached some of The Crimson’s brightest stars.

“You’re certainly the product of your experiences [and] it was The Crimson that shaped me,” Lewis told The Crimson in 1997, when he was chosen as Class Day speaker at Harvard Law School.

But even as The Crimson shaped Lewis, he, in turn, shaped the organization. Over decades as an active member of the paper’s graduate board and one of its three trustees, he was the champion of quality journalism and the model for every young Crimson editor that hoped one day to make it in the world of print.

“You were in a situation where everyone’s parents were begging them not to go into journalism, and you wanted to have some visible role model,” said Nicholas B. Lemann ’76, the dean of Columbia University School of Journalism. “A lot of his influence was just modeling for us what a happy and an honored career in journalism could look like, and it looked pretty good.”

After graduation, Lewis remained a close advisor to Crimson managing editors, making a point to get to know each one and offering advice about the position and their own future—even while he was working at the Washington Daily News and, later, the Times.

George Abrams ’54 first met Lewis while serving as editor of the paper in 1953. The two would serve together as Crimson trustees decades later, playing a part in fundraising and reconstruction of the paper’s Plympton Street building.

According to Abrams, Lewis loved keeping track of how many Crimson editors ended up in staff at the Times, even though he recognized that not everyone would land there.

“If you’re looking for some life pattern that will lead every Crimson editor to become a columnist for The New York Times, you will fail; you will strike out,” Lewis said in a 1981 Crimson interview.

Still, Lewis influenced a generation of Crimson journalists, who went on to award-winning careers, including the likes of Lemann, David L. Halberstam ’55, J. Anthony Lukas ’55, Hendrik Hetzberg ’65, and James Fallows ’70, among others.

One of these journalists, Linda Greenhouse ’68, followed Lewis’s footsteps directly to the foot of the Supreme Court, where she would serve as the Times chief correspondent for 30 years.

A Pulitzer-winner herself, Greenhouse said she is still trying to live up to the standard for legal reporting set by Lewis.

“Journalistically, before he came along, the Supreme Court was an oracle that occasionally and rather randomly issued important decisions,” Greenhouse wrote in an email. “He saw the Court as a full participant in the political life of the country, and approached it as such, in full context and with great nuance.”

Lewis’s reporting on the Court earned him his second of two Pulitzers by the time he was in his mid-30s. He had won his first at the Washington Daily News for coverage of the Navy’s firing of a civilian employee deemed a security risk.

Though Lewis only reported on the Court for a little under a decade and never earned a law degree, many considered him to be one of the nation’s foremost legal experts.

After his stint in Washington, Lewis served as London Bureau Chief for the Times from 1964-1969, and then as an op-ed columnist until his retirement in 2001. His twice-weekly column, titled “Abroad at Home/At Home Abroad,” was a staple among Democratic readers.

“At a liberal moment in American history, he was one of the defining liberal voices,” Lemann said.

Lewis married Massachusetts lawyer Margaret Marshall in 1984. Marshall, who was his second wife, went on to become the chief justice of the Massachusetts Supreme Court.

Though he moved back to Boston while he was a columnist, Lewis co-taught a graduate course on the First Amendment and the Supreme Court at Columbia for 23 years.

Vincent Blasi, a Columbia Law Professor who co-taught the First Amendment Course, called Lewis an “original thinker” in the field, with an unusual teaching ability.

“He was striking in how much respect he had for the thought processes of other people. He never, with students or with me, played the role of the famous person or the original thinker,” Blasi said.

Paul Sack ’48, a former Crimson business editor who was friends with Lewis for more than 70 years, said he was a natural journalist and a charismatic presence throughout his life.

“Tony was a wonderful person and people were willing to work very hard to do things for him, just because of some sheer magnetism of his personality,” Sack said.

A Facebook post and an email newsletter circulating this article incorrectly stated the class year of Pulitzer Prize-winning journalist and former Crimson managing editor J. Anthony Lewis '48, who died on Monday at the age of 85. In addition, an earlier version of the photo credits of the images accompanying the story incorrectly stated that the photos were filed in the Harvard University Archives as HUD 3304. In fact, the images, from top to bottom, were categorized as HUPSF Crimson 23 and HUPSF Crimson 22, respectively.