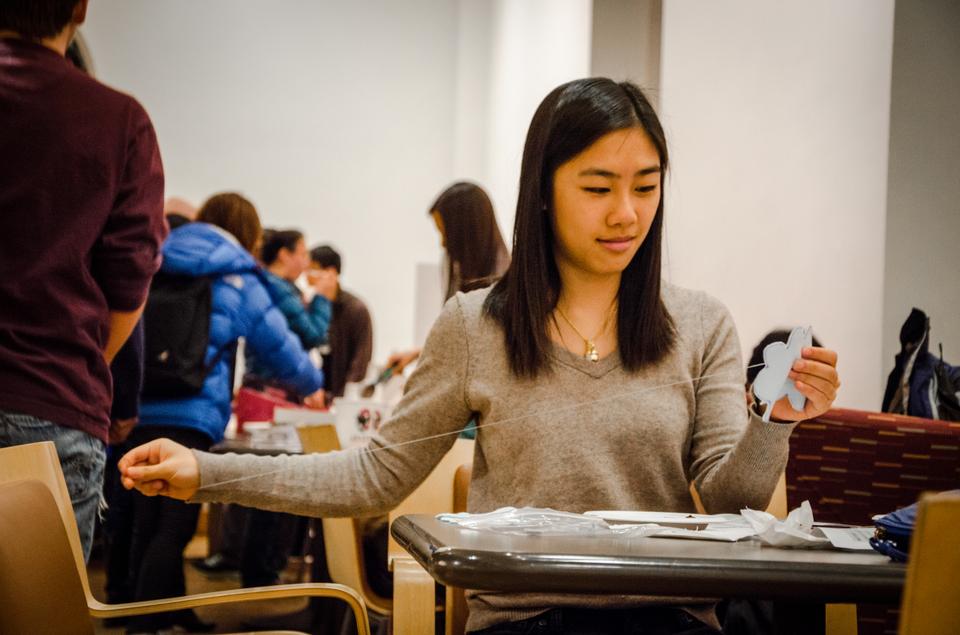 Team HBV organizes the popular plushie workshop to kick off Hepatitis B Awareness Week. Participants learn more about the chronic disease as they sew and stuff their plushies. By John Y Wang
By Quinn D. Hatoff, Crimson Staff Writer

Over 75 students stuffed, sewed, and decorated miniature Hepatitis B viral plushies during a study break Monday evening to kick off Hepatitis B Awareness Week.

During the study break, which was sponsored by the student organization Team HBV Harvard, students snacked on Insomnia cookies and J.P. Licks ice cream while perusing educational material aimed at raising awareness about the liver disease.

Hepatitis B Awareness Week features daily events through Friday, including a daily HBV prize wheel outside the Science Center, a Friday night soiree, and a discussion with public health professor and Adams House master John G. “Sean” Palfrey '67 on HBV vaccination efforts in the United States.

Chloe S. Kurzon '15, who heard about Monday’s study break over a House email list, said that before the event she had had no idea how prevalent the virus was in the United States.

“They did a great job of making learning about HBV fun,” said Kurzon, who added that she enjoyed discovering new facts during each stage in the plushie-making process. “I learned something new at each station.”

The Hepatitis B virus causes inflammation of the liver and, according to Mo, disproportionately affects Asians. Over 240 million people worldwide are infected with chronic Hepatitis B, which can be fatal.

Jennifer S. Chen '15, one of the event ‘s organizers, said that as part of its outreach efforts, Team HBV is in talks with Harvard University Health Services to create a streamlined screening service for at-risk students.

“One in ten Asians are affected, whereas only one in 1,000 Caucasians suffer from HBV,” said Chen. “We want to make sure HUHS is effectively screening students.”

Ingrid A. Hartman '13 said she came to the study break with limited knowledge of the virus but left with both newfound information and practical skills.

“I had no idea it affected more Asian people than in the general population,” she said. “Plus, I learned how to sew a button!”