Parents of the Class of 2014 Descend on Cambridge 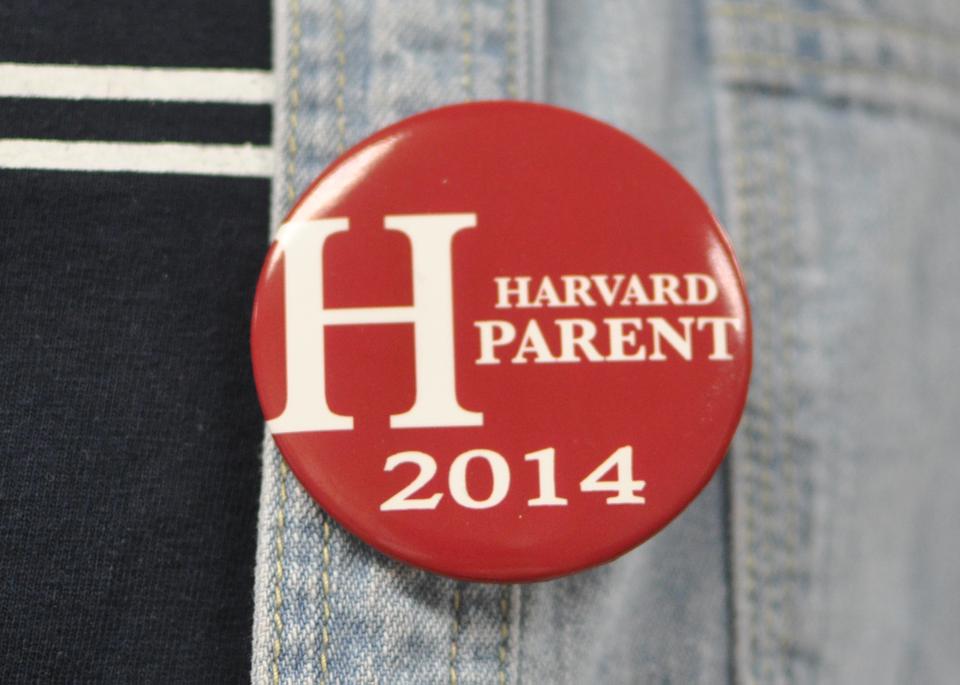 Junior Parents sported these iconic buttons all weekend at events, in dining halls and around Cambridge.
By Yen H. Pham, Crimson Staff Writer

After years of attending back-to-school nights and parent-teacher conferences, mothers and fathers of College juniors congregated in Cambridge this past weekend for an occasion that, for many, represented the last explicitly “for parents” event of their son or daughter’s childhood.

They came for Junior Parents Weekend—two days of House Masters’ receptions, faculty presentations, student performances, dinners out in the Square, and, in some cases, a chance to flex parental muscle.

For the mother of Jayshlyn D. Acevedo ’14, the weekend presented a usually impossible opportunity to directly intervene in her daughter’s love life.

“My mom saw a boy who she thought was really attractive, so she got pictures of him on her phone and told me that I need to find him,” Acevedo said, adding that she found the incident more amusing than embarrassing.

Many parents said they enjoyed the opportunity to experience a day in the collegiate life of their child.

For Julianne La Smith, the mother of Megan M. Quintero ’14, that meant going to Starbucks, Quintero’s dorm room in Kirkland House, a tea at Quintero’s sorority, and a performance of the LowKeys.

For still other parents, the weekend offered a chance to get to know their child’s previously mysterious college friends.

Kristen J. Wraith ’14 said the meeting between her mother and her friends went well. Her mother, Wraith said, brought with her “a really good New York accent, which a lot of my friends were excited to hear.”

Wraith added that her mother “tries really hard not to embarrass me, and she does a pretty good job of it.”

The official events of the weekend, highlighted by a welcome address delivered by University President Drew G. Faust in Sanders Theatre, were coordinated by the Office of Student Life in collaboration with the Crimson Key Society.

Acevedo’s parents attended a career panel at the Office of Career Services, which Acevedo said led to a productive conversation about her future.

“[My parents] absolutely loved it. They were very concerned about me having my life together, and the discussion at OCS really reinforced things I’ve been saying to them and made them feel more confident about it,” she said.

But despite the OSL programming, some bucked the trend and opted to explore Harvard and the Boston area on their own.

“We looked at some of the [official] stuff, but my mom said she kind of wanted to come to see me and be my friend,” said Allison Gofman ’14, who took her mother to a Hyperion Shakespeare scene recital and to see the glass flowers at the Natural History Museum.

—Staff writer Yen H. Pham can be reached at yenpham@college.harvard.edu. You can follow her on Twitter @yhpham.