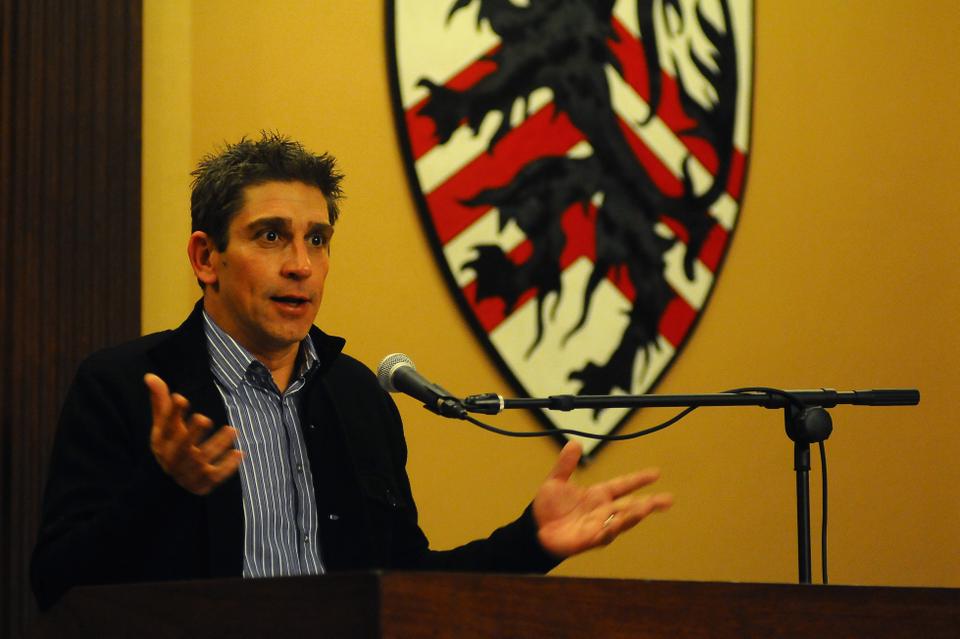 On Wednesday, Richard Blanco, the inauguaral poet for President Barack Obama’s second term, spoke to an audience at the Winthrop House Junior Common Room about his writing and his evolving cultural identity as a member of the Cuban-American community. By Chika-Dike O Nwokike
By Kurt P. Slawitschka, Crimson Staff Writer

“I grew up as a child of exile, so I grew up navigating between two imaginary worlds,” said Richard Blanco, the inaugural poet for Barack Obama’s second term, in a lecture and discussion he gave on Wednesday at the Winthrop House Junior Common Room. “One was the 1950s and 1960s of my parents and my grandparents—the Cuba that they talked about in their stories, and the gossip, and their family lore.” Blanco himself never lived in Cuba, but grew up in a Cuban community in Miami. “I really believed that the America that I saw on TV really existed outside the boundaries of that realm. I really thought there was a place like ‘The Brady Bunch’ or ‘Leave It to Beaver.’”

Blanco, who is also a civil engineer, spoke this past January at the inauguration, during which he read his poem “One Today.” He was the first immigrant, first openly gay, and youngest inaugural poet in history. Through his Winthrop reading, entitled “Navigating Identities,” he explored his identity as a gay Cuban-American.

When Blanco speaks, it seems as if his poetry is meant to be performed—verses come to life and his voice sounds slowly and musically. “I certainly don’t do it on purpose, but it’s the internal music that you hear,” Blanco said. “It’s more like the linguistic patterns of speaking Spanish.” However, he said, he is not convinced the musical aspects of his poetry are derived entirely from speaking Spanish, and he believes that every poet has a sort of music—or lack thereof—to his or her writing.

Blanco began his talk by speaking about his first collection of poems, “City of a Hundred Fires” and discussing about his struggle for cultural identity as a Cuban American. “Somewhere in between [the worlds of Cuba and America] I had to navigate a sense of who I was and where I belonged, so a lot of my work speaks to that,” he said. “We [immigrants] really hold [America] to its ideals, and I think that, since it never met those ideals, we kind of feel, ‘Well, that’s not me.’”

Participating in the inaugural reading helped to change that for Blanco. “The happy ending here is that it was really during the inauguration...that I finally felt American,” he says. The most defining moment for Blanco was when President Barack Obama and Vice President Joseph R. Biden, Jr. shook his hand. “I wasn’t expecting that, and it really was a sense of ushering me and saying...here’s your country,” he said. “And so I finally realized also that my story was an American story. I kind of never accepted that.”

He also spoke extensively on another aspect of his identity: being gay. “[It’s] one of the other things Obama made me famous for now,” he said. However, until his latest volume of poetry, “Looking for the Gulf Motel,” Blanco hadn’t written about his sexuality. “I felt like I didn’t have literarily or emotionally a story to tell that was unique,” he said. In “Looking for the Gulf Motel,” Blanco explores several intimate and humorous recollections of what he called his cultural sexuality. “I realized what was interesting me was that intersection between my culture and my sexual identity,” he said.

In its evocation of specific places and times, Blanco’s poetry is very concrete as well as musical, but it is also defined by its extreme intimacy. During his talk, he gave his first reading of a selection from his forthcoming prose work that focuses on his formative relationship with his grandmother. “‘Better to have a granddaughter who’s a whore than a grandson who’s a pato-faggot like you, understand?’ [my grandmother] says with scorn in her voice,” he read. Yet a tender sadness characterizes the piece, despite these moments of intense emotion and abuse—it’s painful, but not traumatizingly so. “I’m a man when she wakes up, opens her eyes wide for a moment, looks at me and squeezes my hand, then slips away quietly, silently, dying, without a word, and I let her go,” Blanco read.

Though his work and lecture addressed deep and affecting situations, Blanco’s writing has a sense of humor he retained in his delivery. Even in a poem that he said was written almost scathingly, the constant refrain of “I’ve seen you,” read in the voice of an eerily voyeuristic grandmother, roused consistent laughter from the audience. “Writing humor into poetry is very difficult; it’s a very difficult thing to pull off and still be heartwarming,” Blanco said. “But it’s also a cultural reflection. In some ways, you cannot be from a Cuban-American household and not have this tragic-comic sense to your life.”

Since the inauguration, Blanco has made numerous appearances on the local and national media circuits, but once the fervor dies down he hopes to make more appearances in schools than on the news. “There’s a disconnect in America with the arts and with poetry especially,” he said. “The cause that I take away from all this is [that] I want to get into middle schools and high schools, and I want to see about how we can create a new generation of poetry readers.”

—Staff writer Kurt P. Slawitschka can be reached at kurtslawitschka@college.harvard.edu.