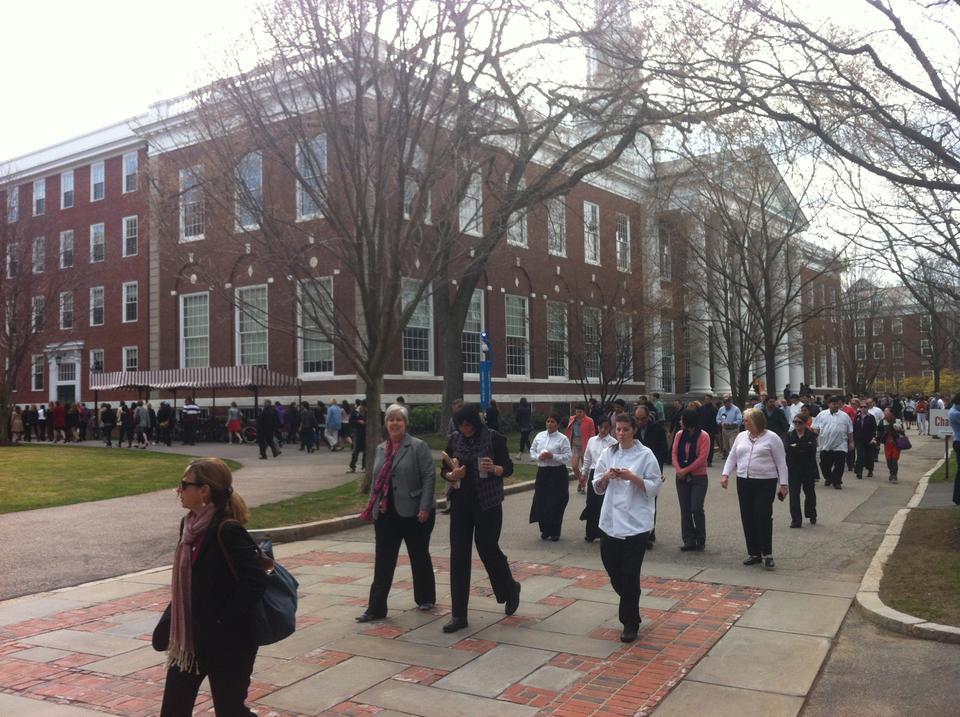 Just as it seemed all members of the Harvard community who ran or attended the Boston Marathon were safely accounted for after the fatal bombing, FBI officials said Monday that Krystle Campbell, a former Harvard Business School employee whose mother and brother still work at the University, was among three killed in the attacks.

Krystle, 29, was near the Boylston Street finish line with a friend waiting to snap a picture of her friend’s boyfriend when the first of two explosions shook the marathon course at 2:50 p.m. Twelve seconds later and a little less than 100 yards away, a second bomb detonated. Krystle sustained serious injuries in the explosions and was rushed by medics to Massachusetts General Hospital, where she died, her father William A. Campbell Jr. told the Associated Press Tuesday.

The two explosions ultimately injured more than 170 and killed three, including 8-year-old Martin Richard, Campbell, and a yet unnamed Boston University student.

Krystle’s mother, Patricia Campbell, has worked as a cashier and server at HBS for more than 30 years. Krystle’s brother, William A. Campbell III, works in the Cabot House dining hall.

Krystle herself worked weekends as a cashier at HBS’ Spangler Grille while attending the University of Massachusetts-Boston, former co-workers and friends of the family said Tuesday. Most recently, Krystle worked at Jimmy’s Steer House in Arlington.

Former co-workers and friends at HBS remembered Krystle as a free-spirited woman who especially loved her grandmother, Lillian Campbell. The two lived together and Krystle had been taking care of her grandmother before her death.

“She was a very independent girl and she put herself through four years of college and never asked her parents for any money,” said Jean Adams, a member of the HBS dining staff for 34 years who said she grew up with Patricia Campbell. “[She was] a good kid, a really good kid. She never smoked, she never drank, she was always focused on education.”

The news of Krystle’s death reached Harvard early Tuesday morning when the family contacted some of Patricia’s co-workers at HBS.

“When I walked into the kitchen at 9 o’clock this morning, people were sobbing,” Adams said. “Grown men [were] crying, they were just devastated.”

Administrators, who had already cancelled classes for the day before hearing of Campbell’s death, hastened to organize a community gathering to express condolences for the family. Roughly 200 students, faculty, and staff gathered at the steps of HBS’s Baker Library at 3 p.m. Under flags flying at half mast, the group shared a moment of silence and prayer led by the Rev. George S. Salzmann, a Harvard chaplain, before hearing remarks from HBS Dean Nitin Nohria and other administrators.

The gathering was preceded by a 30-minute musical selection performed by three MBA students, followed by a reception in Spangler Lounge, where community members wrote cards to the Campbell family.

Aman Kumar, a first-year MBA student present at the gathering, said that the moment of reflection and solidarity was important for the HBS community, which usually prides itself on rigor and intensity.

“Part of showing leadership is knowing when to pause, and that’s what this was... to take a moment to realize that life is fragile.” Kumar said. “Critics of this place like pretending that we think we know everything, that we are invincible, but we’re not.”

Samantha DeOliveira, who works with Executive Education in coordination and whose son graduated from Medford High School with Krystle, said that the outpouring of community support at Harvard ensures that none of its members are alone in times of tragedy.

“This community is always there, no matter what happens to the littlest person or the highest person,” DeOliveira said. “There’s been a lot of sad times, and we’ve all stood together, and this is what I love about being at Harvard, this is why I’m still here.”

Remembrance of Campbell was not limited to HBS. Community members at Cabot House, where Krystle’s brother works, held a moment of silence at 6 p.m. and wrote cards for the Campbell family in the dining hall.

“The dining hall staff is part of this family at the House,” Cabot House Master Rakesh Khurana said. “Billy is someone that is loved by all the students.”