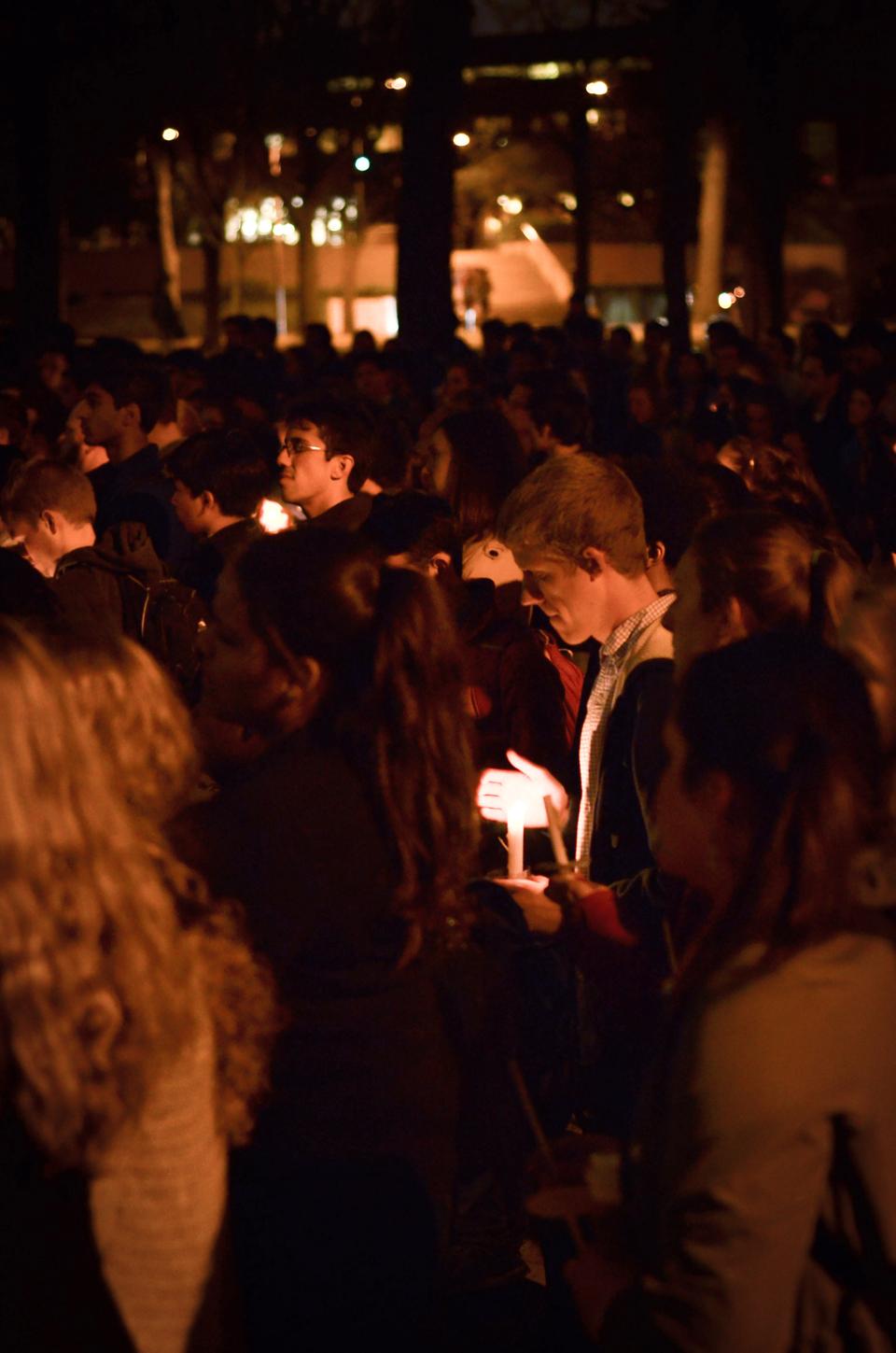 Members of the Harvard community gather outside Memorial Church at a candlelight vigil to commemorate all those who suffer as a result of the Boston Marathon explosion.
By Matthew Q. Clarida, Steven R. Watros, and Caroline T. Zhang, Crimson Staff Writers

On both sides of the Charles River, they gathered.

Some Harvard community members came to the Kennedy School courtyard, joining hands and trading stories at an afternoon vigil. Others assembled in Boston Common, signing posters and laying down flowers beneath the setting sun. Still others congregated around the steps of Memorial Church in Tercentenary Theater, lighting candles and embracing in spite of a strong evening wind.

All of them came to mourn—to grieve, to reflect, to try to make sense of the bombing that on Monday transformed the triumphant 26th mile of the Boston Marathon into a grisly scene of death and chaos.

SHOWING SUPPORT AT THE KENNEDY SCHOOL

A day after explosions at the Boston Marathon and a fire at the JFK Presidential Library prompted a total evacuation of the Harvard Kennedy School, affiliates gathered in the campus courtyard on Tuesday afternoon to participate in a vigil honoring the attacks’ victims and first responders.

Kennedy School Dean David T. Ellwood ’75, who invited students, staff, and faculty to the event via an email Tuesday morning, told attendees that “we’re here first and foremost as a show of support.”

After the crowd gathered, Ellwood asked everyone to join hands for a moment of silence.

Once the vigil concluded, some attendees slowly returned to the classrooms for regular events, but many remained outdoors to continue discussion.

Kennedy School student Cindy Dinh, who attended the vigil, said that this gathering offers a chance for students to reflect on the event further and determine how they can best impact the Boston community.

“It was nice to have the Kennedy School come together for this moment,” Dinh said, “especially since it’s a school of public service and everyone wants to spring into action.”

As spectators near the finish line, two Kennedy School students had already sprung into action. When the bombs went off, these students rushed into the mayhem to assist injured spectators and runners, said Kennedy School spokesperson Melodie L. Jackson.

She added that these individuals chose to remain anonymous.

Several Kennedy School students competed in the marathon, including one who was wearing the event’s trademark blue and yellow jersey at the vigil.

The participant, who wished to remain anonymous, said that he was less than a quarter of a mile away from the finish line when the bombs went off and believed at the time that his wife was waiting for him there. He later learned that she had not yet arrived.

While addressing those at the vigil, Ellwood said that the Kennedy School was offering more opportunities for those who wished to talk about Monday’s bombings.

Jackson said that the Belfer Center’s Weil Town Hall had been commissioned as a space for those who wished to talk and reflect about Monday’s attack.

In the aftermath of the explosions at the Boston Marathon, runners, spectators, victims, and other community members gathered for a vigil in Boston Common on Tuesday afternoon.

Hundreds of people congregated around the rotunda in the Common to sign large banners that read, “Peace Here and Everywhere” and “Boston, You Are Our Home.” Attendees of all ages signed the banners, with some leaving flowers and other gifts.

As he dropped a rose on the banner, one young boy looked up and spoke to a host of shuttering cameras: “This is for peace.”

Participants said that the vigil was a display of Boston’s remarkable strength.

“I came to support the greater Boston community,” said Tony Messina, a student at Northeastern who said that he knew a few friends who attended the race and left unharmed. “Partly, I came to show that we’re not afraid [to congregate] in groups, even after everything that happened yesterday. I think it’s important to show that attacks like this won’t change us.”

Notes written on the banners also referenced the city’s fortitude; many carried the Twitter hashtag, #BostonStrong.

“Hate can never drive out hate. Only love can,” read another entry, quoting a biblical verse.

Several hundred people attended the event, with the music provided by an impromptu collection of musicians organized via Facebook.

“I’m just a local singer, and I was up all night last night and all this morning, just watching coverage and knowing that there is nothing that I can personally do. It was really hard,” said the group’s organizer, Boston musician Lori L’italien. “So I just made a Facebook group and invited everybody I knew that was a singer and we got an astounding number of people.”

Within hours, L’Italien said that over 2,000 people had joined the group’s page and expressed interest in singing at some point to express their emotion about the event.

Speaking about the group’s repertoire, which included Amazing Grace, the Star Spangled Banner, an arrangement of O Magnum Mysterium, and the Christian hymn On Eagles Wings, L’Italien said that the group had taken suggestions and generally looked for “songs that everybody knew, uplifting songs.”

FOCUSING ON GOODNESS AT MEMORIAL CHURCH

Community members gathered outside of Memorial Church on Tuesday evening to hold a candlelight vigil for victims of the Boston Marathon explosions. University President Drew G. Faust and other speakers at the vigil echoed each other in their acknowledgment of human goodness in light of the attack.

Students donning bright blue jackets that signified them as participants in this year’s marathon were among a crowd of hundreds of children, faculty, and community members.

Before the speakers began, Undergraduate Council members circulated through the crowd and distributed long white candles. Attendees leaned in towards each other to light their candles, shielding them from the strong wind that caused many candles to go out throughout the event.

“We are very tied to this community regardless of where home is for us,” she said.

Raghuveer introduced Faust, who delivered remarks that emphasized the importance of staying together as a community.

She quoted writer Toni Morrison, who said, “We tend to overlook goodness,” but that “we must put goodness front and center in our lives.”

Anqi Peng ’14, who ran in the marathon on Monday, echoed Faust’s advice to focus on the good. Peng spoke about witnessing numerous examples of human kindness after the attack, such as restaurant owners giving food and housing to runners.

“I’m not even going to try to make sense of what happened yesterday,” Peng said.

Peng repeated her admiration of the perseverance and strength of everyone there, which she acknowledged as her favorite part about running marathons.

After witnessing and reflecting on the community support following Monday’s attack, Peng said, “I’m going to smile at everyone walking down the street.”

Three Harvard chaplains of different denominations spoke, emphasizing that the event was interfaith and community members of all beliefs were welcome to Memorial Church. The chaplains called for everyone to come together, comparing individual attendees to individual candles, but who together made a “great illumination.” They followed their speeches with a moment of silence.

Following Walton’s words, attendees gave each other hugs and wished each other well as they dispersed.