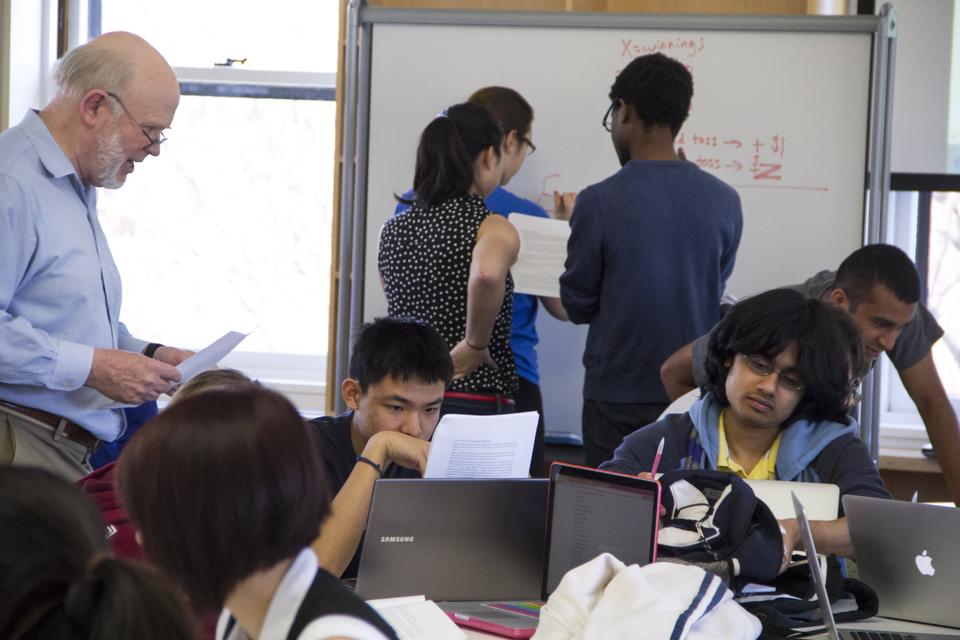 But teaching from the front of an auditorium that—especially after lecture videos became available online—held dwindling proportions of the enrolled students did not seem to be the most effective use of class time.

As a result, Seltzer decided to experiment with “flipping the classroom” this semester. For a third of the course, Seltzer is providing material in pre-recorded lessons for students to watch online, and instead using the two weekly 90-minute sessions for group work, coding exercises, and class discussions.

Faculty of Arts and Sciences classes have promoted group work in the classroom for years, but the flipped classroom method goes a step further by moving the traditional lecture out of the lecture hall. Several other CS professors say they are considering how to adopt the concept to address a lack of attendance in their own courses.

Now, as SEAS anticipates a move to more spacious quarters in Allston, computer science professors may soon have access to the spaces necessary to grow the flipped classroom model. But professors acknowledge the virtue of the traditional lecture format, and say there are fundamental limitations to scaling the model for larger courses that cannot simply be overcome with more physical class space.

“What we really want to teach people is not so much facts, but how to think about approaching problems and solving them,” Lewis said.

One year later, Lewis’s idea is beginning to catch on. A Tuesday afternoon in a CS 161 class finds Seltzer’s students working in pairs to download the code for a new problem set and analyze one of the functions in detail.

With the students spread across the room in tables of four, Seltzer and the course’s three teaching fellows wander around taking questions, occasionally pulling up one of the six movable whiteboards in the room to illustrate a concept.

Seltzer said that the new format fosters greater engagement and a sense of community among herself, students, and the teaching staff.

“In a traditional lecture, when you try to get interactive conversations going, the people who are most in control and most comfortable with the information are those who are most likely to answer questions and engage,” Seltzer said. “In the flipped classroom...the groups that are struggling and that actually need help, those are the ones with which the TFs and I are engaging.”

Yaniv Yacoby ’15, a student in CS 161, said that sitting in a flipped classroom encourages him to think critically about the material.

“It allows you to think for yourself and figure out exactly why existing infrastructures are in place instead of receiving information exactly as it is,” Yacoby said. “I thought it was very, very effective.”

In a concentration in which students sometimes skip class to watch online lecture videos at their leisure, the flipped classroom model may offer a way to boost attendance—an issue that has become even more pressing as SEAS prepares to move even further away from the center of campus.

Currently, attendance in many computer science classes ranges from one-half to two-thirds, according to various professors who are teaching lecture-based courses this semester. Computer science professor David C. Parkes, who teaches CS 186: “Economics and Computation” and records lecture videos, wrote in an email that around 30 of the enrolled 43 students show up on a given day.

“I think that we, as faculty, should be organizing lectures in a way that, for most students, it would be a mistake not to attend class,” Parkes wrote. “We can do this by making lectures interactive, and by encouraging reading in advance of class.”

But Seltzer estimated that attendance in CS 161 is around 75 percent—higher than previous years—which she directly attributes to the implementation of the flipped classroom model.

“People have done fine in 161 skipping lectures,…but this year, the attendance has been great,” Seltzer said.

Although decisions have not yet been made about where SEAS courses will be held following the Allston move, computer science professor John G. Morrisett, who teaches Computer Science 51: “Introduction to Computer Science II”, said that he expects large courses like CS 50 and CS 51 to remain in Cambridge.

Although moving the class across the river may take a toll on class attendance, Morrisett said that if the new buildings in Allston were outfitted with classroom space that promotes working in small groups, students might actually be more excited to go to class.

“One of the things I would love to do for [CS] 51...is think about flipping the classroom, at least part of the time, and do more hands-on programming in the time that we have together,” Morrisett said. “I think some of the new space that we’re talking about in Allston could enable that.”

Morrisett added that the decision of where to hold classes will be a process of continual experimentation.

“I think we’ll have to play around with it and see, will students come, or will they not?” Morrisett said.

Despite the flipped classroom model’s successful implementation in two CS courses and interest in expanding its use in the classroom, instructors said there are still challenges in designing a course around the new format.

Lewis said that while the flipped classroom method integrates well with the content of CS 20, it might be less successful in other situations.

“I don’t think this style lends itself so well to a course where you’ve got to develop a complicated argument that requires a lot of explanation and synthesis on the part of the instructor,” Lewis said.

In addition, senior lecturer on mathematics Paul G. Bamberg ’63, who is currently teaching CS 20 while Lewis is on sabbatical, said it takes extra effort for an instructor to prerecord lessons and come up with sample problems for each class.

Seltzer also brought up the possibility that the flipped classroom model could overburden students with preparation work on top of their already heavy assignments.

Yet instructors and their students agreed that the biggest challenge behind flipping the classroom is adapting the model for a significantly larger class size.

“In terms of [the instructor] being a highly visible presence while people are working on the problems, 12 tables is pretty much the limit,” Bamberg said.

Bamberg said he thinks the upper limit on a flipped classroom is around 50 students—to teach more than that, a class would have to be split up into different sections.

Currently, there is no interactive class space for larger courses among SEAS’s lecture halls. Both CS 161 and CS 20 are held in Pierce 301, a newly-renovated interactive classroom which seats 50 students.

Although SEAS will have the opportunity to design similar classrooms in Allston, there remain problems in scaling the flipped teaching model that go beyond the sheer amount of room available. Seltzer said that she was “struggling” to envision the model working for a class as large as CS 51, which has more than 200 students.

“What would a classroom look like where you could actually have that many people but still have the small group interaction in a pretty seamless way?” Seltzer asked. “I don’t think just taking [Pierce] 301 and making it four times bigger is the right answer.”

Although there may be challenges to applying the model to other courses, Seltzer said she hopes other professors explore the benefits of using a flipped classroom.

“I don’t think it comes as any surprise that there are ways that work better [than lecturing],” Seltzer said. “I am shocked at just how exciting I found it and how dramatic it was.”