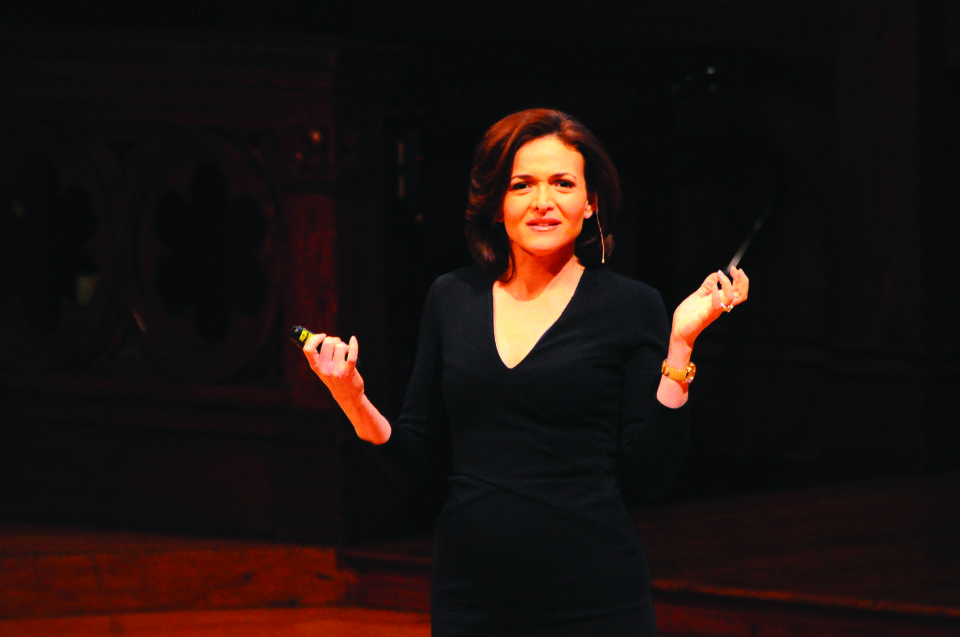 Sheryl Sandberg, Facebook COO and author of Lean In, talks about her experiences and her book, urging women to take risks and seek new challenges and to strive for leadership positions in whatever they do.
By Indrani G. Das, Crimson Staff Writer

Sheryl K. Sandberg ’91, chief operating officer of Facebook, told audience members in a packed Sanders Theater to be aggressive in pursuit of their ambitions. During the Thursday afternoon address, she promoted her “Lean In” initiative, a multifaceted public campaign which encourages people to support women “leaning in” to achieve their goals.

Over half of the crowd stood up—the highest proportion of audience members who stood up to this question at one of her talks, Sandberg said. She proceeded to explain that she believes many people think they do not have the ability, skill set, or intelligence to do a job.

“I can’t change how I feel. Part of me is still the girl that sat in this auditorium and walked out saying, ‘I don’t belong here,’” Sandberg said of her own feelings sitting in Sanders Theater as a newly-admitted high school student.

The campaign to support women pursuing their goals is the topic of Sandberg’s recently published book “Lean In: Women, Work, and the Will to Lead” as well as the focus of Leanin.org, a global initiative connecting people who encourage women to achieve their aspirations. According to Sandberg, only 14 percent of executive-level jobs and 7 percent of corporate board positions in America are held by women. Forty percent of women in the workforce do not receive a single sick day, she said.

“For the 21st century, the central moral issue of our time is the oppression of women and girls around the world,” said Sandberg. “We have a leadership ambition gap, and until we fix it, we will not solve the leadership gap.” But some audience members said that they were unsure about the universal applicability of Sandberg’s ideas. Rachna Khosla said that she believes Sandberg’s experiences have been heavily intertwined with her privileged background. For example, many women do not have the option of hiring paid child care in order to spend time working hard in their fields, she pointed out.

“I think there is something in her experience that isn’t as global as she probably would want it to be, in terms of coming from a privileged background and having the opportunity to make those types of decisions where you could get child care and then keep working as hard,” Khosla said.

“I think those aren’t choices that a lot of women in the country can make,” she added.

Wentao Xu ’16 identified with the speech for reasons other than gender.

“For me, it was like I could especially sympathize with the disadvantages she had to go through,” he said. “I am an immigrant from a low-income family, so becoming a leader feels like all the odds are against me. But hearing her talk, overcoming that seems like a feasible thing now.”

Sandberg concluded her address by asking audience members to stand up if they could think of at least one thing they would do if they were no longer afraid.

Everyone in the audience, including Harvard University President Drew G. Faust, stood.