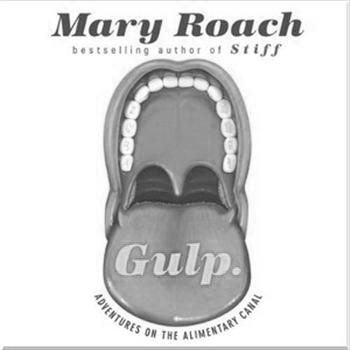 When Mary Roach writes about science, she doesn’t just include the unpleasant bits—she actively pursues them. So far, in her career, Roach has written books about cadavers, the afterlife, sex, space travel, and, most recently, digestion. As part of the promotion of her latest work, “Gulp: Adventures on the Alimentary Canal,”  Roach was the guest of honor at a talk and book signing at the Brattle Theatre on last Friday. Though the event was clearly centered on “Gulp,” it spawned conversations about the gritty details of many of her other works as well. The captivated audience seemed to care less about Roach as an author working in the publishing industry than about her ability to capture, with an immersive research approach, the humor that arises from the sometimes gross, generally untouched corners of science.

The night’s jovial mood was set quickly by host Chris Kimball, American chef and radio personality, who opened the night by sharing his thoughts on Roach’s approach to science: “Mary Roach is like the 10-year-old who just loves the yucky stuff.” From there, Kimball and Roach gleefully jumped from anecdote to anecdote as they described Roach’s various adventures: asking a crematorium owner in China if he removed meat from the “anterior side” of human carcasses to sell to a restaurant for its dumplings, accidentally brushing her teeth with Gyne-lotrimin (a type of vaginal cream), and riding a reduced-gravity aircraft—colloquially known as the “Vomit Comet”—to name a few.

Roach’s wild antics can present themselves as a bit chaotic, but they are an integral part of her admittedly frenzied research and writing processes. “I start out and have four months of random flailing,” she said. “I have to accept that there is going to be a period of just complete and utter uselessness.” The best-selling results of her inimitable methodology are very appreciated by her fans, though. Brita Martin, an attendee who has read nearly all of Roach’s works, lauded the final products’ readability and entertainment value. “I think it’s really great that [she] is able to take occasionally dense and scientific literature and translate it in a likable and humorous way for the everyday reader,” Martin said.

Despite her ability to synthesize scientific information and interest in the field, Roach does not have an extensive background in the natural sciences. With a B.S. in psychology from Wesleyan, Roach is driven by an innate sense of curiosity, desire to explore unconventional topics, and an attitude she herself describes as “puerile.” From on the audience’s questions, it became apparent that much of Roach’s appeal stems from the combination of inquisitiveness and abandon that leads her to topics most authors neglect. Even after reading the macabrely funny “Stiff: The Curious Lives of Human Cadavers” and the undeniably risqué “Bonk: The Curious Coupling of Science and Sex,” avid Roach fans wanted more. One woman asked, “Is there, in any of your five books, a chapter or story you had to omit?” The response to this question was a surprising anecdote from Roach’s “Bonk” research that culminated in the comparison of a type of Easter candy to a sexually induced muscular reflex.

Roach’s talk and book signing, which played more like a celebrity interview on a late-night talk show, reflected what the books promise for the attendees; it was able to strike a balance between information and a fun medium through which to convey it. With topics ranging from the similarity of Cheetos and kibble to feeding babies peanut butter formed to look like feces, the talk lacked boundaries just as Roach’s books do.