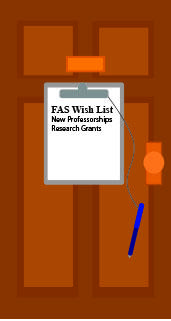 Part Three of a five-part series on Harvard's approaching capital campaign. Part One was published on April 29, Part Two on April 30, Part Four on May 2, and Part Five on May 3.

When Harvard’s capital campaign goes public later this year, the University is expected to formally unveil a handful of ambitious—and abstract—goals for which they will solicit billions of dollars in gifts.

But before there are publicized goals, there are private wishes, and every department, center, division, and school in Harvard’s Faculty of Arts and Sciences has them. From endowed professorships to new office space, the requests of each sub-group of the University’s flagship faculty are as diverse as the fields they study. Some needs, like financial aid, are obvious. Others are more obscure.

Yet as the campaign’s preparatory stages reach their conclusion after nearly a decade of off-and-on planning, campaign leaders are using the “quiet phase” to find the common threads that will weave specific wants into a more condensed list of objectives. Though those objectives should ultimately fit together seamlessly, faculty members involved in the planning process said the public vision of the campaign is the product of an arduous vetting process that aligns hundreds of potential priorities with prospective donors.

A broad initiative like teaching and learning, for example, is composed of hundreds of distinct pieces, such as endowed professorships, research grants, and scholarships for graduate students—and each requires financial support.

“Campaign planning should be in some sense a real extension of rigorous academic planning,” said William C. Kirby, the director of the Fairbank Center for Chinese Studies and former Dean of FAS. The ideas that raise the most money, he added, start at the ground level and work their way up.

The process of filtering ideas from bottom to top varies slightly across FAS’ sub-groups.

At institutes and regional centers, directors work with faculty members and other affiliates to determine a center’s top priorities, which are presented as a “wish list” to current FAS Dean Michael D. Smith.

Ideas coming out of academic departments face a longer road. After being passed from faculty members to department chairs to one of three divisional deans, they finally make their way to Smith, who is responsible for synthesizing them into a holistic vision of FAS’ main priorities.

“[C]ampaign planning—particularly planning for academic priorities—occurs most fundamentally at the level of the three divisions, which have the best insight into departmental needs,” FAS spokesperson Jeff Neal wrote in a statement.

Once wish lists are submitted, however, the quiet phase becomes all but silent for departments and centers.

Although Neal said that Smith holds periodic meetings with department chairs from each academic division, as well as with center and institute heads, most sub-groups are now waiting for their proposals to be evaluated, said Andrew D. Gordon, history professor and a former director of the Edwin O. Reischauer Institute of Japanese Studies.

Indeed, at this point much of the action has shifted behind closed doors as requests are shopped around to potential donors.

“Each center, either singularly or in conjunction, has put forward to the dean ideas, plans, things that we’d love to do that range from buildings to programs,” said Gordon. “And we’re sort of waiting to get green-lighted on them or not.”

Tamara E. Rogers ’74, vice president for alumni affairs and development, said that the quiet phase of any campaign is a period of “testing and marketing and analyzing results” to figure out what will be feasible when the campaign goes public.

“The quiet phase allows time to work with potential donors, see how they react to what we’re trying to do in the campaign,” Rogers said in an interview in mid-April. “If we get very affirmative reactions, and we’re able to raise money in this quiet phase up front, then it gives you a sense of how appealing the campaign is going to be.”

This shopping period can be one of the campaign’s most difficult aspects, according to regional center directors, but also one of its most important. With hundreds of ideas and deep-pocketed donors, trying to pair one with the other is a high-stakes game that ultimately helps campaign leaders outline broader themes and initiatives.

“You never want to raise money for things you don’t want to do,” Kirby said. More problematic can be naming priorities that donors will not support. Ideally such priorities are tweaked or eliminated during the vetting process, Gordon said.

Still, the vision developed through the vetting process is not set in stone.

As the campaign unfolds in real time, requests and expectations—particularly for smaller initiatives—can fluctuate a great deal. Rogers said that the current campaign will try to build in “unrestricted” funds to deal with that fluctuation. Those funds will not be tied to a specific initiative, allowing administrators the freedom to pursue new ideas not already articulated in the campaign.

“They’ve made a very good case for unrestricted giving,” Rogers said. “So that if you think of the Faculty of Arts and Sciences, Dean Smith has flexibility to try new things and to undertake initiatives or to fill in financial aid, for instance.”

While the planning process encourages campaign leaders to think ambitiously, it also gives departments and centers an opportunity to reframe their academic needs in terms of the bigger picture, Kirby explained.

“What are the needs of Harvard going ahead in the next 30 years?” he said. “Some of them are obvious—if you have a dorm falling apart and you need house renovations, then it’s an obvious thing to do. But what will be the next revolution of the life sciences? How do we have the capacity to invest in that?”

—Nikita Kansra, Sabrina A. Mohamed, and Samuel Y. Weinstock contributed to the reporting of this story.