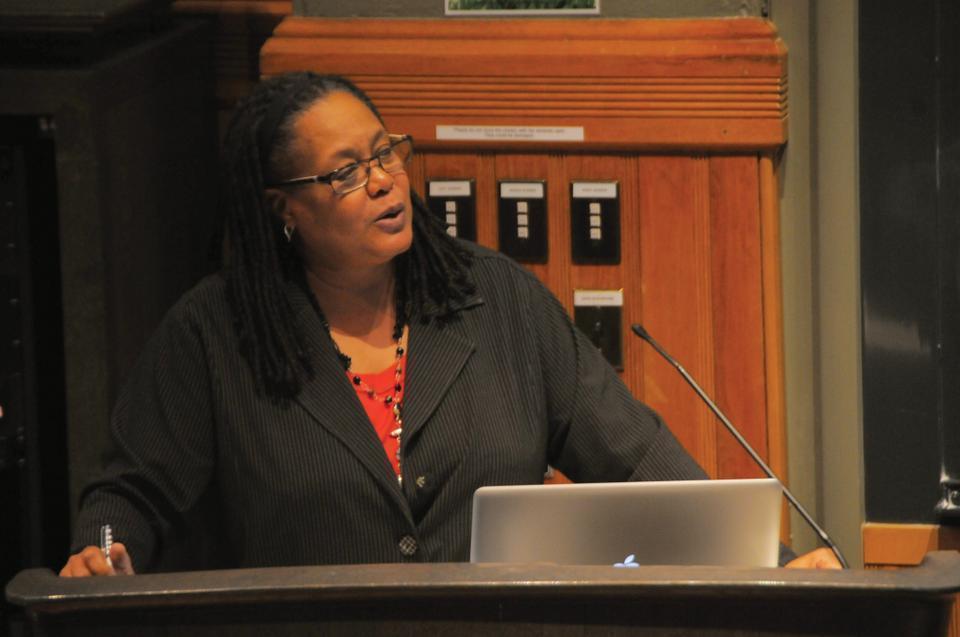 Evelynn M. Hammonds, shown speaking at the Harvard College Governance panel in a file photo from last November, is expected not to return as Dean of the College in the fall, a source confirmed Friday. The confirmation comes weeks after news broke that she and other administrators had authorized two sets of secret searches of resident deans' email accounts, including one that explicitly violated the Faculty of Arts and Sciences privacy policy.
By Nicholas P. Fandos and Samuel Y. Weinstock, Crimson Staff Writers

Evelynn M. Hammonds has been in negotiations about a possible departure from her position as Dean of Harvard College and is expected not to return to the post in the fall, a person with direct knowledge of the situation confirmed Friday.

The confirmation follows six weeks of speculation about the embattled dean’s future as the head of Harvard University’s flagship school.

The departure would draw to a close a five-year term marred of late by the College’s largest cheating case in recent memory and revelations that University administrators authorized two rounds of secret email searches, one of which explicitly broke the Faculty of Arts and Sciences email privacy policy.

In an emailed statement to The Crimson on Friday, Hammonds wrote, “I have not been asked to resign as dean, nor have I offered. I am dean of Harvard College and I think speculation to the contrary is unproductive.”

Her statement did not rule out the possibility that she could depart in the near future, either through a resignation or the expiration of her contract. When asked Friday evening whether she was preparing to step down as dean or whether she has been pressured to resign, Hammonds did not provide a direct response. Jeff Neal, a spokesperson for the Faculty of Arts and Sciences, wrote in an email that Hammonds's statement earlier Friday answered both of those questions.

Ali S. Asani ’77, chair of the Near Eastern Languages and Civilizations Department who said he had no direct knowledge of the negotiations, said Friday the email searches likely led to a “loss of trust” between members of the faculty and the Administrative Board.

“I am sure it has affected her relationship with these resident deans who are so core to the College, and under the circumstances, it would make her job very difficult,” Asani said.

Even if Hammonds departs from University Hall, Asani warned that issues of trust among faculty and students will not simply disappear.

The action comes after nearly two months of scrutiny over those email searches that were covertly executed on the accounts of resident deans last fall. The Boston Globe first reported those searches on March 9. Two days later, on March 11, Smith and Hammonds released a joint statement saying that the searches had been targeted, meta-data queries of the resident deans’ administrative email accounts.

However, that statement contained a number of incorrect details, and on April 2, Hammonds informed faculty gathered for their monthly meeting that she had personally authorized a second round of searches on a single resident dean’s administrative and faculty email accounts. Though Hammonds said she consulted with the University Office of the General Counsel, she did not get Smith’s authorization and therefore broke the faculty email policy. Taking responsibility for the second round of searches, Hammonds told faculty that she had “failed to recollect” them when making the March 11 statement.

Faust has tasked Boston attorney Michael B. Keating with investigating the searches and preparing a report that, according to Harvard Corporation member William F. Lee ’72, will be shared with the Harvard community.

Administrators have said that those email searches were intended to plug leaks of information related to another scandal that has clouded Hammonds’ tenure—cheating allegations that implicated approximately 125 students in Government 1310: “Introduction to Congress.” The unprecedented Ad Board case ultimately required roughly 70 undergraduates to withdraw from the College.

Many have criticized the handling of the Government 1310 case, which took more than six months to adjudicate and included an unprecedented review of all students enrolled in the course, including many who were not initially suspected to have cheated.

As Dean of the College, Hammonds is the head of the Ad Board. All resident deans also sit on that board alongside select faculty members.

Hammonds was named Dean of the College in June 2008, becoming the first woman and the first African American to hold the position. She has spent much of her five-year tenure overseeing Harvard’s ongoing House Renewal project and working to expand the College’s social spaces. Early in her term, she also helped implement the College’s new General Education program.

While some undergraduates have questioned Hammonds’s visibility as dean, Asani said he believes Hammonds has done a “very good job” making the College administration more responsive to the needs of students during her time in the role.

Hammonds became dean after a two-year stint as Senior Vice Provost for Faculty Development and Diversity. She is a tenured faculty member of both the History of Science and the African and African American Studies departments. It is likely she will return to those positions in the fall even if she leaves her role as Dean of the College this summer.

As recently as Monday, Robert D. Reischauer, senior fellow of the Harvard Corporation—the University’s highest governing body—told The Crimson he had not heard that Hammonds would be leaving her post as dean. He declined to comment on Hammonds’s future Friday afternoon.

—Staff writer Nikita Kansra contributed to the reporting of this article.