As University gears up for campaign's launch, administrators cast a wide net for donors. 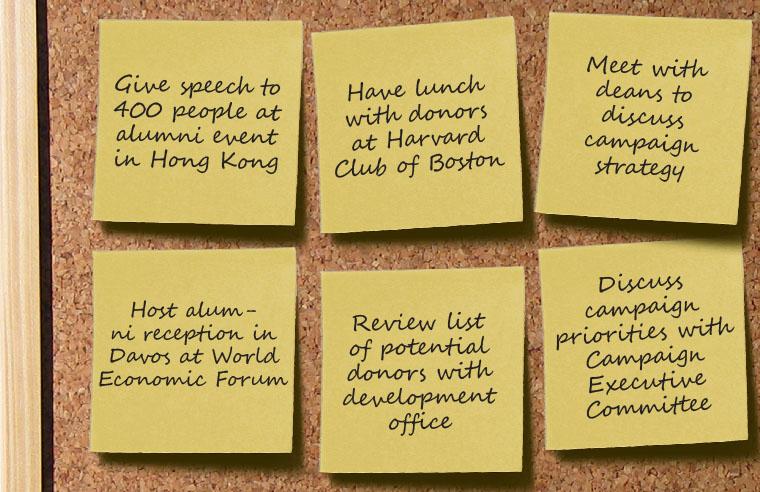 Part Four of a five-part series on Harvard's approaching capital campaign. Part One was published on April 29, Part Two on April 30, Part Three on May 1, and Part Five on May 3.

As the September launch of Harvard’s multi-billion-dollar capital campaign approaches, top-level administrators and members of the University’s development office are targeting and schmoozing prominent donors in search of gifts for Harvard’s most ambitious fundraising effort in history.

Though the campaign is currently in the two-year “quiet phase,” during which administrators and other organizers gauge donor interest and predict total contributions, the work of soliciting donations from alumni and other supporters of Harvard is already eating into the jam-packed schedules of University leaders. And with the public launch of the five-year public campaign just four months away, the volume of that work is increasing.

For the people tasked with forging connections with donors and securing gifts for the campaign, the process is unpredictable and inexact. As they travel across the world to meet with potential donors in one-on-one encounters or deliver speeches to hundreds at a time, these officials find that the process demands nuance and finesse in the face of changing circumstances.

“It’s not a science, and it’s not an art,” said Tamara E. Rogers ’74, vice president for alumni affairs and development. “I like to think of it sort of as a craft, and maybe a bit of a sport.”

The background work that facilitates that effort generally begins with Rogers’s office. Members of Rogers’s team work to pinpoint potential donors by assessing attendance at Harvard Club events, tracking donation histories of University graduates and supporters, and dispatching staff members to meet with alumni and appraise their current relationship with Harvard.

From there, a development office staff member begins to meet with donors to understand their specific interests, which can range from strengthening a certain academic department to establishing a campus center. During these conversations, which can take place on campus, at Harvard clubs, or in other locations in cities across the globe, the Harvard representative also estimates the donor’s capacity to give.

The time that it takes to successfully solicit a donation varies drastically, from one meeting to a matter of years.

“If you’re going to inspire confidence and build a relationship with someone such that they would want to support the institution, it does take time from deans, and from the president, and from the provost,” Rogers said, adding that the most prominent donors often expect to work with Harvard’s administrative leaders.

“Most of my travel is related to fundraising,” said Provost Alan M. Garber ’76, who travels for around two to three days every six weeks.

When Faust traveled to Hong Kong and Seoul, South Korea, in March for various meetings and speeches, her itineraries in both cities included events with hundreds of alumni. Faust cited that trip and others, such as her January visit to the World Economic Forum in Davos, Switzerland, as chances for her to connect with donors.

For administrators with already busy schedules, the “degree of labor intensity” involved in securing contributions “can come as a bit of a surprise,” Rogers said.

The main reason that fundraising takes so much time, Faust said, is the need to form relationships with potential donors.

Faust said that, above all, she considers the fundraising process to be one centered around establishing connections.

“You don’t just walk up to somebody who you think has a lot of capacity and an interest in Harvard and say, ‘Hello, it’s nice to meet you. Will you give me an enormous gift?’” Faust said. “Instead, you develop a relationship with someone over a long period of time and get to know what their interests are, get them to trust you, get them to believe in what you want for the University and your aspirations for the University.”

And with the campaign soon to emerge from its quiet phase, administrators said that the time they spend fundraising will only increase.

“I’ve been told that it will happen even more,” Faust said. “My time will be increasingly called upon for events, activities, visits [and] focus on the campaign.”