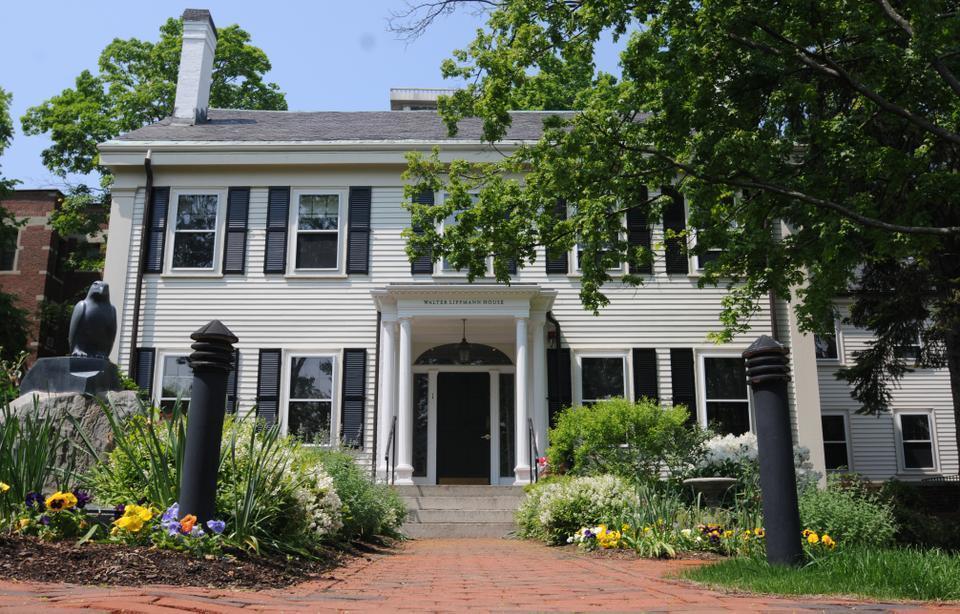 A class of 12 U.S. reporters and 12 international journalists will study at the Walter Lippman House, home to the Nieman Foundation, in the upcoming academic year. The Nieman Fellows will temporarily leave their careers to research and study at Harvard.
By Kerry M. Flynn, Crimson Staff Writer

The Nieman Foundation of Journalism has named 24 journalists from across the globe to the 2013-2014 class of Nieman Fellows, who will take temporary leaves from their journalism careers to study at Harvard.

The mid-career fellowship gives journalists with at least five years of professional experience the opportunity to engage in a specific area of research, audit courses from across the University, and participate in various seminars for 10 months starting in the fall.

“It’s an intensity that is not focused on producing a story for tomorrow’s newspaper or magazine or radio station. It’s a chance to focus on skill-building and intellectual pursuits,” said Ann Marie Lipinski, curator of the Nieman Foundation.

“It’s a chance for me to step back from a daily pressure and sit back and think about some of the bigger questions of trends I’ve been covering,” said Jeffrey R. Young, one of the 2013-2014 Nieman fellows, who covers technology as a senior editor and writer from the Chronicle of Higher Education.

While at Harvard, Young will study the impact of massive open online courses on higher education. Young said in an interview that he is specifically excited to be researching this issue at Harvard, where he will have the opportunity to connect with people from the Berkman Center, the Graduate School of Education, and EdX—Harvard and MIT’s joint online education venture.

“This new idea of doing online education in this way has raised a lot of questions and there are a lot left unanswered,” Young said. “I feel very much like a new student coming in.”

Tammerlin Drummond, another Nieman fellow and a metro columnist for the Bay Area News Group, said she is interested in engaging with professors at the School of Public Health to study gun violence as a public health issue.

“In order to get a full view of it, you have to take a step back from the day-to-day, going from the funerals and the homicide days,” Drummond said.

Lipinski had been conversing with Marder last year about the future of watchdog journalism and how to integrate his interests with the Foundation.

“It’s great that [Temple-Raston is] a Washington journalist. I think Murrey would have liked that,” Lipinski said.

In addition to the individual projects, Nieman fellows will have the opportunity to meet and collaborate with each other. While 24 Nieman Fellows were picked for the coming class, Lipinski said she and the other members of the selection committee thought with 25 in mind.

“The 25th [fellow] is the character of the class. We want them very much connected to each other and finding opportunities in each other’s work,” Lipinski said.

For the 2012-2013 Nieman Fellows, crowdsourcing was a popular topic of collaborative study. Many of the fellows focused on the huge presence of social media in the coverage of the Boston Marathon bombings, Lipinski said.

“The extent to which their working together in teams has been part of what makes a class coming together, I see a lot of potential for that from the incoming class,” Lipinski said.

Many of the fellows are looking into the future of the journalism industry and how to take advantage of digital platforms. Tyler Cabot, a new Nieman Fellow and an article editor at Esquire, said he will explore long-form journalism.

“It’ll be great to trade notes with the other people in magazine. And in the end, we’re all doing storytelling in different ways,” Cabot said.

The Nieman Foundation will be celebrating its 75th anniversary in the fall, where the newest class will be able to participate in reunion programming.